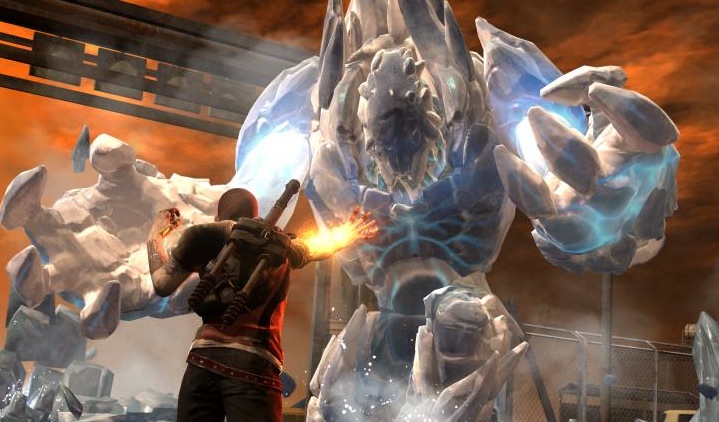 Review: The first inFamous for PS3 was a great showcase for the power of the PS3 that showed off the machines capabilities brilliantly. Beyond that, it was also a good game in its own right, with tight gameplay and a reasonably good story. The inevitable follow-up could easily have been a cut and paste job and still be considered a good game. Thankfully the development house, Sucker Punch, doesn’t roll that way. When they make a sequel they make sure it’s better, as can be seen with their wholly under-appreciated Sly Cooper series. Taking all the originals goodness and optimizing it, rather than doing a wholesale revamp, inFamous 2 is very much a better game than the first one.

Polar opposites
If you haven’t played the first game, inFamous2 makes only the slightest effort to fill you in. Cole McGrath is a bicycle courier, who gets caught in a mysterious and unusual explosion caused by a Ray Sphere device that destroyed an entire block of Empire City, leaving him miraculously unhurt and with electric based super powers. [Mild Spoiler Alert] In the closing moments of the first inFamous we learn that as the game’s hero (or villain), Cole McGrath is destined to battle a global threat know as the Beast. inFamous 2 starts with this very encounter, playing out as a tutorial to familiarize you with the games basic controls and starting the game off with a helluva bang. It goes without saying that Cole gets his ass handed to him and, along with his buddy Zeke and an NSA Agent name Kuo, flees to the city of New Marais, leaving Empire City to be completely destroyed. In New Marais, an obvious stand-in for the Hurricane Katrina ravaged New Orleans, Cole meets Dr Wolfe, a scientist that specialises in Conduits, people that are able to absorb Ray Sphere energy and develop super powers. People like Cole.

At this point, it comes to light that the Beast is slowly making his way to New Marais to battle Cole. Who has a limited amount of time to improve his powers to be capable of battling this threat. Not enough on his plate? Add the fact that the New Marais has also suddenly been invaded by insect-like freaks. Not helping matters. How Cole goes about doing that is entirely up to the player since Cole can use less than scrupulous means to achieve that goal.

What’s interesting about the “good” and “evil” paths in the game is that each path offers both advantages and disadvantages to the player and do alter your playing style. Being evil means not caring about collateral damage when in combat, so a lot of those powers have splash damage effects. Whereas being good offers powers that have great focus, meaning it’s easier to keep civilians safe by picking off your enemies. In either case though, Cole eventually develops into a being literally bristling with power.

While the choice to be good or evil is pretty binary when it comes to your available powers, it carries way more weight when it comes to the story, though it doesn’t seem so at first. The journey towards the game’s ending is not as gripping as it could be, with the initial portions being rather badly paced and then getting a sudden, though believable, level of character development toward the game’s climactic finale. The unexpected plot development will make you really wonder about whether you have been good or evil in the first place. It’s a welcome move that will really encourage you to replay using a different alignment in your second go round. If only that high level of story-telling permeated the whole narrative.

Destroyed beauty
The first thing you’ll notice about inFamous 2 is how much better it looks than the original game. Which is saying a lot, since inFamous 1 was a good-looking piece of work. A technical improvement on the first game, inFamous 2 has a great level of environmental destructibility not seen in the first game. Battles are now much more fascinating and spectacular in there own right, thus ensuring not only great fun but also a sweet satisfaction for the eyes. Beyond that, the aesthetic look and feel is just spot on. New Marais looks like a city deep in the dwang, even before Cole and all the freaks show up. This is especially obvious when the second area of Flood Town opens up. The whole area looks like a hybrid of Mad Max and Waterworld, with scrambled together bridges linking the roofs of buildings and people setting up makeshift hovels wherever they can just to survive. It’s depressing watching the citizenry trying to eke out a living; playing as a villain here just seems cruel. The improvement in graphics isn’t limited to the environments. The game overall makes a very strong visual impact, with solid character model for both the ordinary citizens on the street and the various freaks and monsters you’ll battle along the way. The larger beasts are especially impressive. Cole’s electrical powers are depicted especially well, giving a light show of note, particularly during a sequence played out during a lighting storm.

An Electrifying adventure
In gameplay terms, inFamous 2 isn’t terribly different from the first game. The game basically involves waiting for mission icons to appear on your map, navigating to them and then completing each one, which typically involves beating up a bunch of guys or monster. If it sounds repetitive, that’s because it is. Fortunately, navigating around the city of New Marais is effortless and thanks to the wide variety powers available to Cole, combat is engaging, with multiple tactical options available to mitigate the repetition.

And the game does make at least some effort to mix up your missions a bit, even if they mostly consist of you pounding on guys. For instance, there are a few missions that task you with re-connecting the power to parts of the city. This involves finding an active transformer and then firing a blast of electricity across the city to an inactive one. You take full control of the tesla missile, as the game puts it, and you have to actively guide it to its target – and if you take out a few bad guys with it along the way, so be it. There are a few other mission types that break away from what you would expect, but ultimately, inFamous 2 is a game about you laying the smack down. One key change from the first instalment is the improved melee combat, which echoes the combat system used in Batman: Arkham Asylum. Granted, its no match for that game, but it is easier to go hand-to-hand with multiple foes, and the game offer some passive benefits to doing so as you gain new powers, for instance, pulling of a one hit kill move will recharge Cole’s Electric meter fully.

Final Charge
Even with those minor flaws, inFamous 2 is a game packed with the enjoyment good stuff. The core gameplay is still as much of a pleasure as before, and while it’s sort of binary in nature, your choices do impact the story; extending even to your playing style. inFamous 2 is a more than worthy sequel to the first game. Any money dropped here is money well spent.