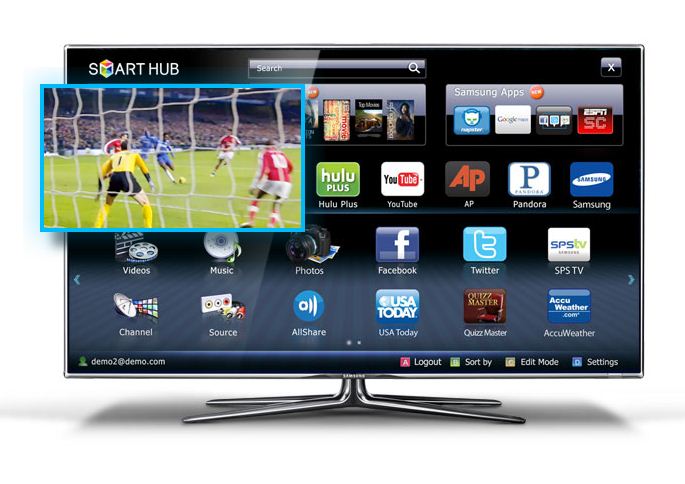 I enjoy paying tribute to the most influential piece of technology in my life, the TV. It’s always been there for me, my television. The fuzzy, nostalgic feeling when I think back to my childhood, the memories of grainy images and needing to adjust the bunny ears just so. It is with a little sadness that I say that those days are long gone – obliterated by a new era of crystal clear imagery and absolute TV awesomeness. Yes! TVs are now just too brilliant to describe. And the height of all-round viewing technology is front and centre in the living room with the US$2,500 Samsung D8000 3D LED Smart TV The styling has substance
The D8000 series is a remarkable showcase of Samsung’s design prowess. The LED screen is just barely framed by a skinny glass bezel edge, thin enough to give the illusion of an edgeless image suspended in mid air. The flagship 55-inch model (UN55D8000), sports a screen that is only 1.2 inches deep, contrasting beautifully with the almost art deco-like brushed stainless steel stand, which elegantly brings the whole ensemble together.

It’s a gorgeous TV (inasmuch as a big black rectangle can be), and the styling improvements have been carried through to the new 3D glasses. I suppose they had to stop the style-fest somewhere, so the stock remote is best kept out of sight, with its clunkiness incongruent with the rest of the package’s designer chops.

The TV technology
Samsung has not spent all its time on the looks, but also improved the technology driving the TV. The screen boasts a 1920×1080 (full HD) native resolution and a 240Hz refresh rate, resulting in staggering image quality. Due to the Micro Dimming technology, even in a in a well-lit room, the TV still manages to produce a rich image with a startlingly deep black and well contrasted white. The shading and contrast technology is matched with Samsung’s new Wide Colour Enhancer which displays brilliant colours far superior to conventional screens. Since the TV was reviewed in the Gearburn office without being able to experience analogue broadcast television, I was unable to test Samsung’s Digital Noise Filter which is supposedly able to help eliminate graininess.

One concern is some slight ghosting on intense action scenes while viewing HD movies and while gaming. This image lagging effect can minimised but not entirely eliminated with some tweaks of the display settings.

Less dork-factor on 3D glasses
It would be remiss of me not to mention the 3D capabilities of the TV. The newly revamped glasses have provided a much needed advancement in 3D technology. All the processing components have been moved away from the lenses towards the back of the arms, so they look less bulky and a lot more stylish. No longer will you need to feel like a throwback from a B-Grade sci-fi movie with the suave new Ultra-light Rechargeable 3D Active glasses. New versions of the glasses will also have an optional dock, capable of charging up to four pairs at once.

One of the upgrades to the glasses is that they have switched the transmission medium for synch from Infrared to Bluetooth. The drawback of the upgrade is that cross-compatibility with the older Samsung TV series that use Infrared falls away. Sorry, you’re out of luck. Dorky glasses for you, older generation owners.

Aside from viewing 3D-native content, the D8000 has the ability to convert your standard TV into 3D with the touch of a remote button. Although this has novelty value at first, the rendering of some black and white shots eventually loses perspective and after some time the visible refresh rate left me feeling slightly nauseous and disorientated.

Personally, I’m not a fan of the current level of the technology, but the D8000 is the best I have seen so far, especially with the advancements made to the 3D glasses.

Connectivity
My personal affection for the TV grew when plugging in my external hard-drive (I could have just as easily plugged it into my PC and shared the HDD wirelessly but I digress.). The TV comes with four HDMI, three USB, PC, component and even an Ethernet port, giving you a wide choice when it comes to device connectivity. Once connected, the onboard codecs are able to deal with AVI, MKV, MP3 to make your viewing experience a hassle free pick-and-play scenario.

If you have a Samsung Galaxy S or Tablet, you can download the Samsung Remote App for free from the android market or Samsung App store. The app features a full QWERTY keyboard to aid in online browsing using the SMART TV’s native browser. This is a major improvement to the stock remote provided with the TV as browsing without a full keyboard can become tedious.

Overall, the TV is strides ahead of where I thought it would be. I was physically stunned at the picture quality and found my viewing experience with it close to perfection. Although there are some kinks to be worked out and the price is for the well-heeled only – many will balk and opt for an older series model delivering 80% of the D8000 capabilities at fraction of the price. But if you have the money to burn? Put your mitts on because round about now your credit card is glowing white hot.