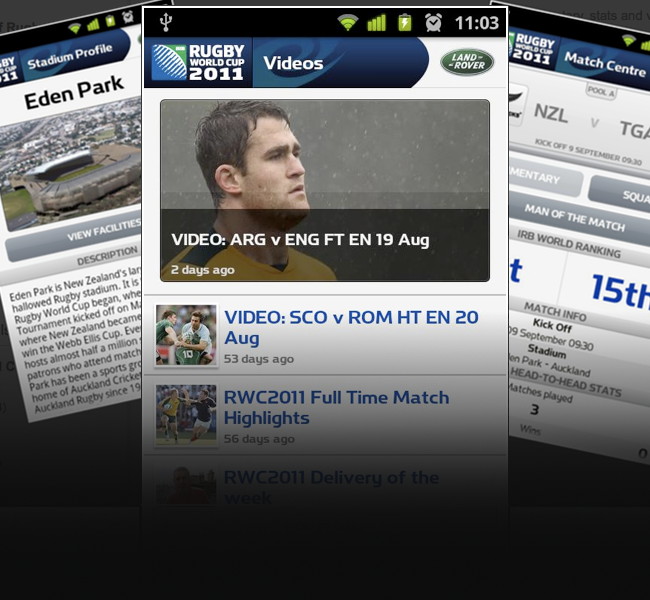 This week I take a look at the Official Rugby World Cup 2011 App, a resource rich and very informative app that I would happily pay a couple of dollars for. This one is free. Win!

A mecca for adrenalin junkies, panicky expats from all over the world and home of the All Blacks rugby team, New Zealand is a beautiful little country in the Pacific Ocean that has a helluvalot going for it. Lovely beaches, hobbits, active volcanoes, Rhys Darby and deep-fried Mars Bars are just some of the wonderful experiences you can have in the land of the long white cloud. That and having your ribs stove in by a 120kg rugby player in a black jersey.

As we all know (except those living under a rock for the past four years), the Rugby World Cup is being hosted across the North and South islands this year – in fact right now, 9 Sept to 23 Oct. It promises to be a killer series with all 20 competing nations capable of big things, vying for the chance to get their muddy, masking-tape bound fingers on the Web Ellis trophy. As you’d imagine, this makes for some seriously entertaining live sport…except if you’re on the other side of the world and have to deal with a ten hour time difference and the fact that all the good games are being played while you’re at work!

While watching some of the local games this weekend, I noticed that our local SA cable broadcaster SuperSport had brought out its new iPad app for RWC 2011, so I quickly checked my updates for its iPhone app (which desperately needs a complete overhaul) only to find that the broadcaster had completely ignored the iPhone platform. After a few minutes casting around for a decent RWC app, I hit the official RWC 2011 app, sponsored by one of the key partners, Land Rover. To be honest, I wasn’t really expecting much, some news articles here, a video or two that I wouldn’t watch over there, and some outdated stats thrown into the mix. But I was wrong, very wrong.

All the info, in the way you want it
Upon launching the app, you’re greeted with a fast-loading news feed that is continuously updated with fresh content from all over, and filterable by your chosen team, so that you can keep on top of every little bit of important news from the other side of the planet. They key here is to not look like an uneducated chop when there’s a bit of rugby talk going on around the fire. The articles are well written, relevant and you’re able to share via Facebook or Twitter with the tap of the screen. The tournament tab of the app is where I was really impressed though. Beautifully designed retina-display quality icons, neatly arranged on the screen that, when tapped, take you to a team’s page where you can see their IRB world ranking, who their head coach is, their team shirts and accurate, up-to-date match stats. Tapping on the matches option for your selected team displays their upcoming matches and, get this, the app detects and uses your location to determine what time each match kicks off for you! Genius.

The team page also has a players listing that lists the entire squad and each player’s own stats. What I like about this is that the performance stats are split into RWC 2011 (currently all at 0, of course), past World Cups and all other test matches.

Within the tournament tab, you can also see all the pools as well as the all-important knockout round structure of the tournament (again, to keep you informed and to stop you from embarrassing yourself when making your picks in the office Superbru pool).

The match centre part of the app will be the hub once Dan Carter kicks off against Tonga in Auckland on Friday. Here you will be able to see every single RWC fixture, stats and results on past matches between teams, live text commentary while the game is being played and the final teams for the match ups. There is a results tab as well as a ‘today’ tab, which will no doubt have fixtures and results for the day. Also included in the app is an awesomely designed and well-populated video page for interviews, highlights packages and classic rugby moments from past World Cup tournaments. The developers have also included a clever little guide to what’s on in NZ for those lucky enough to be in the country at the time and want to experience their surroundings in between attending some of the games.

For those of us who will be deskbound and using every ounce of our good nature to not call in sick or sneak our Driftas into the office, the Official Rugby World Cup 2011 app is a must-have. Looking at the quality of design and responsiveness of the app, I’m pretty sure the live commentary is going to be great, and that this already feature-packed app is going to be talked about by sport loving geeks all over the world. Get it now, and get ready for kick-off.