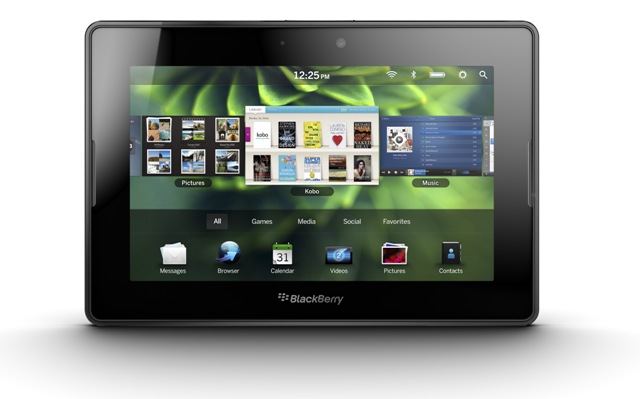 The rumours spread after analyst John Vhin stated that production on the tablets had halted.

Vhin said, “We believe (RIM) has stopped production of its PlayBook and is actively considering exiting the tablet market. Additionally, our due diligence indicates that RIM has cancelled development of additional tablet projects.”

RIM said, “Any suggestion that the BlackBerry PlayBook is being discontinued is pure fiction, RIM remains highly committed to the tablet market.”

Following the release of the Amazon Fire, many retailers across the US have now slashed the price of the PlayBook to US$200 to rival the budget-priced tablet. Sales of the PlayBook have been slow; the cheapest model is priced at US$499, the most expensive at US$699. The PlayBook has been regarded as a successful test for its QNX platform.

RIM has promised an upgrade to the PlayBook which will include updates to major sections of the software. New features will include a native email client, which many analysts say would have assisted the PlayBook during its initial sales run. The last quarterly analysis from RIM indicated that 200 000 PlayBooks shipped in the last quarter. Overall, RIM predicts sales of close to 700 000.

iOS and Android devices have dominated the tablet and smartphone markets, which has been a factor in RIM shares plummeting 3.37%, closing at US$21.16. RIM CEO Mike Lazaridis acknowledges that the past year has been challenging, but feels that “RIM is on track to return to growth in the third quarter and beyond.”

“We have promotional plans in place for the fall intended to drive both enterprise and consumer adoption of PlayBook, including special incentive programs for enterprise, a loyalty program for existing BlackBerry customers and rebates in consumer channels,” he said.