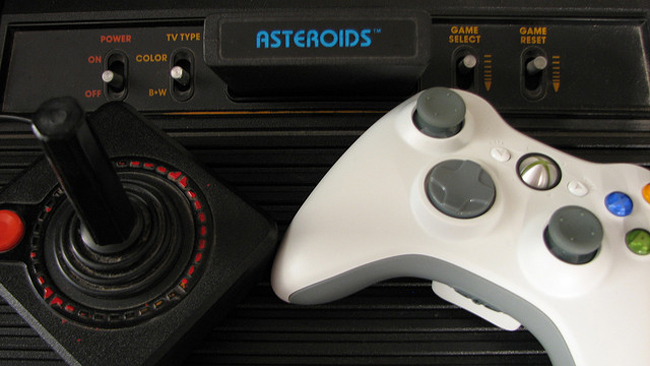 The first game I can remember playing was Pong on a console of some description, whose name escapes me, that my favourite Aunt bought in Saudi Arabia, of all places. It was a fun distraction, but I wouldn’t say it was the tipping point that led me into a life of pixels and midi audio.

The hook that got me gaming regularly was the Atari_2600 that my parents bought me and my brother — oddly enough again bought in Saudi Arabia — and that consumed large portions of the summer of 1985. I still wouldn’t consciously identify my self as a gamer yet.

It was two maybe three years after that, when finding new games for the Atari became difficult, that the Commodore_64 entered our lives and that my brother developed his longstanding interest in the world of computers. It was this brilliant piece of kit that truly made a gamer out of me.

It was thanks to the C64 that I actively started seeking out news and information about games by way of classic mags like Zzap!64, making friends with people who also had a C64 and even entering into fanboy rivalries with Spectrum owners. And for the record, the C64 totally kicks Spectrum ass.

Anyway. When the C64 entered its twilight, I naturally graduated to the PC, which I’m sure was true for most C64 lovers. By that point, my brother and I were already known within our circle of friends and family as “the computer guys”.

It was a label we were both content with and that we embraced because, yeah, it was true. Computers weren’t as ubiquitous back then, but then as now, when a relative needed help that involved computers, one of us would be called.

We were computer guys and we were cool with that. For my brother, the computer has remained a constant; he makes his living working in the IT industry. For me, my passion for DOS evaporated when I met this guy: Once I got my hands on the Sega Megadrive, to all intents and purposes, I turned my back on PC gaming. In retrospect, I realise now I was never really a “computer guy”. Everything I knew about PCs, I had learned to enable me to play more games.

That was all it was really about. And once I had my hands on the Megadrive, gaming became incredibly convenient pastime. The long, seemingly endless waits for C64 tape decks and IBM floppy drives to load up games were not an issue anymore.

I put in the cartridge, switched on my Megadrive, switched on the TV and it was game on. From that point on I was a devout console gamer. (With occasional lapses in faith for Half-life, System Shock 2 and a few others Sonic doesn’t need to know about.)

It’s pretty much remained that way ever since. I chose to play on consoles, not because I think it was superior or because it has better games or any other number of superfluous reasons. No. I became a console gamer because I’m lazy and starting a game on a console was just simpler and easier and I never had to deal with installations, hardware issues, software conflicts, driver updates, patches, viruses et al. Basically, I didn’t feel like I needed a pre-flight check for my leisure time to begin.

A lot of what attracted me to console gaming is still true, but it seems like, with the start of the seventh generation of consoles, that pre-flight check has some how creeped into the console experience.

Recently I reviewed Resistance 3 for the PS3 here on Gearburn, a game I enjoyed, but found a bit lacking in the story department. Anyway, one of the things that I neglected to mention in the review was the arduous process it took to actually get started playing the game.

Because I planned on playing the game online, I needed to download and install a 600mb update, a process that lasted 45 minutes, perhaps an hour. With that done, I had to perform the mandatory install of the game proper, a process which added another 25 or so minutes to the ordeal, but with that done I finally went about killing me some Chimeran scum.

After messing about with the campaign for a while, I decided to give the multiplayer a shot — which is excellent, by the way — which meant I had to input the online pass.It seems a simple enough thing, but somehow inputting a series of numbers and letter meant another 25-30 minute wait. Entering that online pass meant having to quit the game and going into the Playstation Store, which required its own firmware update.

All of these installs and firmware updates and whathaveyou, left me with 2 hours or so of not playing Resistance.

I had a similar experience recently with Batman: Arkham City, having to input codes and waiting for the Catwoman and Robin DLC segments to download. My internet connection was a bit on the slow side that night, and so I only played the game the following day. Nearly a full 12 hours after putting the disc in my Xbox.

This is the new reality of the console gamer: we wait and wait and wait. And after that, we get to put in codes and then wait some more. And all this waiting is exactly the reason I stopped being a PC gamer to begin with.

But what are a few hours here and there you may ask. To that I say: I’m not a kid anymore. In my youth, while waiting for Bomb Jack or Turrican to load on my C64, I just played soccer outside. I’d run back in later and if the game was done loading I’d play it and if it wasn’t, I’d just go play with my GI Joes. These are not options for me any more. With work and family responsibility, I have maybe 5-6 hours a week to actually game. Losing two hours of that is a significant chunk of that leisure time.

The sad part about this, is that lot of this waiting is just really unnecessary. On the PC, when there were driver issues or hardware conflicts, a lot of time, these were things that developers couldn’t reasonably foresee. We accepted that it was the nature of the beast. With consoles, a lot of these time-eating barriers are premeditated and artificial. And I find it just a bit hard to swallow that my console — gaming a device I specifically bought for its convenience — is being deliberately turned into a PC.