Our predictions for the Motorola Droid RAZR were spot on it seems. Yesterday, Motorola teased a brand new RAZR, a smartphone will hopefully take on the likes of the Samsung Galaxy S II and iPhone 4S’ of the world.

The Droid RAZR is a beast of a phone, but we already spoke about the internals, so let’s highlight the features which Motorola officially released.

Not quite bulletproof
When we mentioned that the RAZR is Kevlar-coated, dreams of utilising the phone as a makeshift nightstick swam around in our heads. In truth, the threaded Kevlar coating is on the backing plate of the phone and will be used to maintain the overall integrity, keeping it slim and appealing at the same time. The RAZR is supermodel thin 7.1mm thin.

The screen is Gorilla Glass, so it won’t break or scratch. It’s not indestructible but it will survive the daily knocks phones endure. Motorola even adds in waterproofing, describing it as “a force field of water-repellent nanoparticles which shields the phone against water attack”.

A combination of shock-absorption and a stainless steel interior delivers one of the sturdiest smartphones ever made.

Smart Actions
The Smart Action app is practical and fantastically implemented. With Smart Actions, you can automate every action of the Droid RARZ, such as lowering the brightness on the screen, turning off various connectivity features and generally keeping the phone from powering down during heavy use. The decision to go with a 4.3″ Super AMOLED screen was a wise one as it actually saves on battery life. The phone will reportedly last for 12.5 hours during general 3G use.
Motocast, the iCloud-like service for the Droid RAZR is also included.

Peripheral pleasures
The Droid RAZR will launch with laptop and webtop docking stations, which will work much like the Bionic and Atrix handsets did. Plug the Droid into its docking station, connect an HD monitor and behold, a glorious secondary display is yours.  The Droid then practically becomes a laptop. This may possibly beat AirPlay mirroring at its own game despite the docking station being a wired option.

Overall, the Droid RAZR looks insane. A large screen, excellent battery saving options, a finely tuned OS and LTE support may push Motorola back into the spotlight once more. All the official specifications can be viewed here. 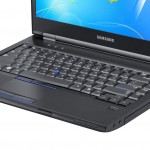