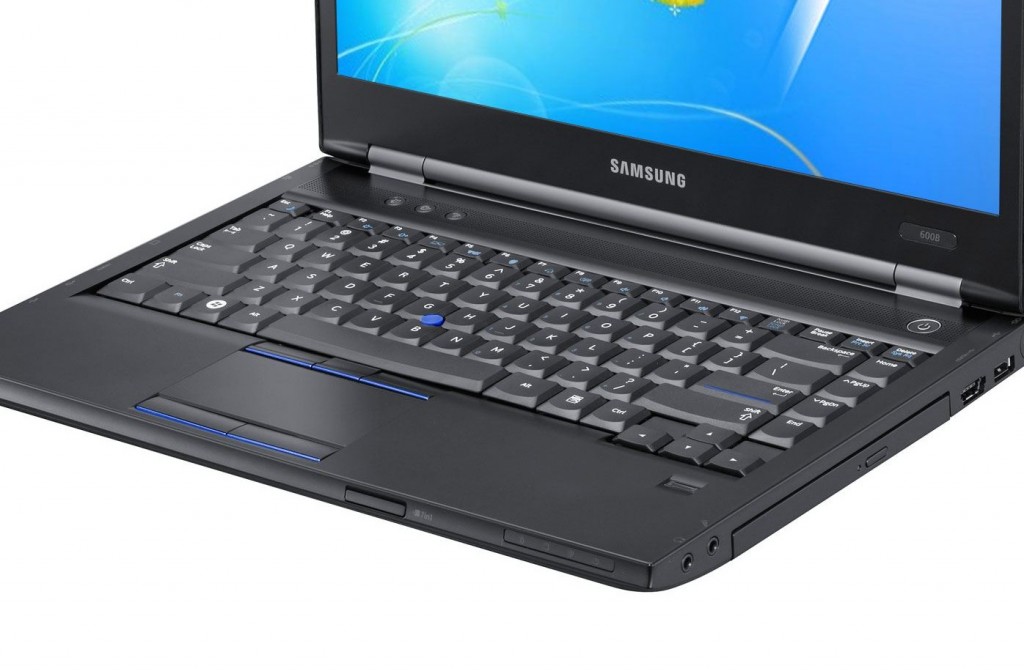 The Samsung NP600 is an entirely excellent notebook PC, which is to say about as special as a fried eggs on toast dinner. There’s nothing wrong with it, plenty right, and even pretty tasty and filling. This guy is mostly anything you could want in a US$1000 midrange machine, plus top-notch build quality and a magnesium casing to protect the screen, supposedly able to take a small truck driving over it. Great gobs of horsepower, nice bright screen, looks damn snazzy in a matt black way.

A massive rant is coming up about the dead end of current PC notebook design, so let’s get the meat and potatoes down the hatch before the hot sticky pudding of editorial invective. What does this notebook do well? Everything you’d expect — the NP600B5B model tested is no slouch in the specs department — it has a Core i7 processor, 6GB RAM, Nvidia Optimus (NVS 4200M if you care), healthy 650GB hard drive, two SuperSpeed USB ports and the normal Wi-Fi, etc etc. The big selling point of this range is the magnesium frame and back panel to protect the machine — particularly the display.

Staying alive, staying alive
This is not to be sneezed at — as they say in the world of motor racing: To finish first, first you have to finish. Having a blindingly fast notebook doesn’t help you if it died from a fatal dose of being knocked off the table. For students and working stiffs, ruggedness is vital if you’re schlepping your computer around with you everywhere. If you’re into business features, it even has a fingerprint reader. FWIW.

The other big selling point is the LED display, which to be fair to the tik-crazed copywriters at Samsung marketing central, is very bright. What it is not, is very smart.

Great — you can use your computer in a dazzlingly bright coffee shop — but how about a brightness sensor to automatically dial it back when you’re working at night?

Less watching over the shoulder This is where the rant starts — why are PC manufacturers so brilliant at watching each other and matching feature-for-feature, and so staggeringly bad at innovating, or developing features for…oh, I don’t know… actual users?

It’s not like there’s no-one doing this stuff (*cough Apple cough*) — looking at the computer and going, “You know what? If we changed this, people would be able to do stuff quicker!”

Let’s start with numeric keypads. All the PC manufacturers fixate on having them — who cares? How many people actually use them? Accountants? Statisticians? Not really the majority of the laptop demographic. The numeric keypad is an anachronistic waste of space that makes the rest of the keyboard (the bits you actually use all the time) cramped and cluttered. Most “knowledge workers” are writing and editing documents and emails, managing pictures and music, browsing the Web. The most important keys for them are editing and text navigation. Page up, page down, End, Home, cursor keys, backspace, delete — all of which are now stuffed into the crannies around the edges.

Having a numeric keypad also forces the designers to push the mouse track pad awkwardly over to the left of the body. What a lose.

Off key
Function keys. Completely. Useless. Well — they do have one use, acting as the place to put the alt keys for the shortcuts we do need all the time — screen brighter/dimmer, volume up/down/mute. Why have a Fn-key for the functions you use, and a natural key for the ones we don’t? When was the last time you pressed F1 (apart from by accident. No, I don’t need help writing a letter! Piss off, you stupid animated paper clip)?

Caps lock. Get rid of it. It’s abused by idiots, and needless. The stupid ‘Windows’ key that was never needed, and never used. You click on Start… then select what you want. Or press the Windows key, then move the mouse over to the Start list anyway to select what you want. Get rid of it! The same applies to the pointless ‘Right Click’ key. I can right-click, you know. It’s right there on the mouse. On the right.

The power plug — not wanting to sound all Mac-fanboi, but the Magsafe plug just works. It clicks in the socket and you’re charging; if you trip over your power cable, it pops out, nice and safe. Why do PC manufacturers not see the real-world advantage of this kind of connector? But no, they must stick to the same plugs they’ve been using for thirty years. And finally – PC track pads. Why so awful? Almost every recent machine I’ve looked at has a track pad that’s at best servicable — at best. Usually a little glitchy, and unreliable and jerky on the multi-touch to scroll. Imprecise. Inconsistent between applications. I’m constantly writing sentence fragements halfway through the wrong paragraph because the cursor jumped to the mouse pointer due to some perceived brush on the trackpad. Apple got multi-touch right back in 2002-ish. And it has came on in leaps and bounds to be genuinely fantastic UI device. PC trackpads are still pre-2002. What’s the problem?

Push back and be better
OK, so rant over. Sorry, Samsung. It’s not all your fault, a lot of the blame for these design stupidities lies with Microsoft and Intel and their nit-picky and regressive platform standardisation rules, but it’s time for hardware manufacturers to push back and make PCs better. It’s a very nice machine. Fairly pretty, definitely classy, with a solid, flex-free chassis you can count on. It’s not the speediest machine — it does fairly well on CPU- and disk-intensive stuff, so it opens and switches between apps really fast (compared using PerformanceTest against similar i7 machines from Lenovo and HP), which is good for business and student applications. It’s very decent for video watching and even some light gaming, but 3D graphics give it a bit of heartburn, so no GoW for you.

It weighs in at a moderate 2.7kg, but the sleek styling makes this 15″ machine look slinkier. It’s everything you could want in a mid-range PC notebook, which is to say, nothing that gets the heart beating faster.