Stirring controversy is nothing new to the world of Call of Duty: Modern Warfare. Echoing the horrors of the infamous “No Russian” level from Modern Warfare 2, the highly anticipated Modern Warfare 3 features a scene which will most likely stir emotion, fill forums and incite Fox News style exclamations across the world.

A leaked video (which has now been pulled “due to a copyright claim by Activision Games”) depicts a brutal act of violence which hopes to top the airport massacre of Modern Warfare 2. Please note that the following description below might safely be described as a “spoiler” for gaming fans.

The cut scene begins with a father filming his family during a vacation in London and as the scene starts, “Davis Family Vacation, London, Day 3” flashes on the screen. While the father is recording the scene, the player remains in full control of the camera.

A mother and daughter play for the camera as Modern Warfare 3 attempts to tug at the heartstrings. The daughter shouts “We’re going to Big Ben!” before a truck pulls up alongside them and promptly explodes, showering debris and fire in front of the camera.

When the player resumes focus of the scene, only rubble and devastation remains. The mother and daughter can no longer be seen but it is taken that they have been killed in the shocking terrorist attack.

There is, as of yet, no context to the scene within the frame of the gameplay, but it will most likely fit the sombre tone of the game, which aims to take players across the globe as a monumental battle plays out. Developers of Modern Warfare 3, Infinity Ward are willing to bet the farm on its mature approach to storytelling and with controversy such as this, it had best be able to back up its extreme gameplay decisions. 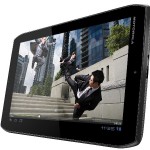