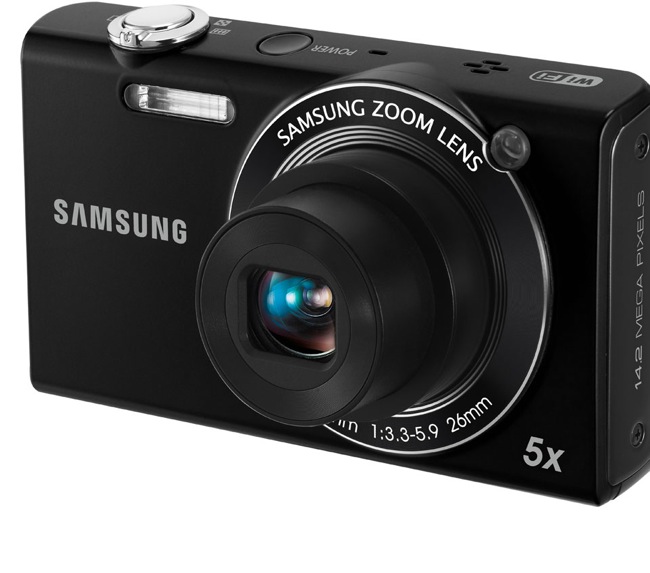 It’s everything you want in a cheap point and shoot, and more. Remember every time you took a pic, and went, “Jeez, how awesome would it be to just beam it up to the Web or Facebook!” The Samsung SH100 does this via Wi-Fi – and there’s more! It also lets you use your smartphone as a remote viewer. How awesome is that? Not very, unfortunately. Only suckers and those who don’t read Gearburn reviews buy first generation technology.

The SH100 is explicitly designed for the smartphone generation – the menus, the touchscreen, even the memory card uses smartphone-like cues. Most of the control is done via the touch-screen, with only a shutter button with zoom toggle, power button, image play button and home button on the back.

What’s inside the box
It has a 26mm Samsung lens with a 5x optical zoom, giving an effective 26-130mm in 35mm terms, which is a nice range for a pocket camera. Lens quality is entirely acceptable for an entry-level camera – the joys of a tiny (approx 7mm) CCD is distortion is seldom a problem, and there is little observable fringing. Together with the AF-assist light, it has a built in flash (with a guide number of about five medium-sized birthday candles).

It’ll shoot 14MP images, and 720p video with sound. Sensitivity goes up to ISO 3200, although like most entry level point and shoots going past 800 is a bit dicey in terms of noise.

Connectivity and charging is via a single port with a proprietary connector (serious negative burns here, Samsung). An accessory cable lets you plug into a TV via a composite video and mono audio RCA connector.

It’s very handy at taking pictures (always a good thing in a compact camera), with very competent auto-focus and auto exposure meeting. It has scads of clever little modes. Clever, that is, if you’re seven. OK, that’s a bit harsh. Some of them are great – a “Programme” mode that gives you quite a lot of control over shooting parameters, a “Macro” mode and more. Then there’s a whole bunch of filter and effects modes, including ones that create auto-frames and special effects. Most of these are novelty at best.

The touch screen also needs a stylus – you can use your finger at a pinch, but only just. Rushed much?
And this throws into painful relief the mishmash of the design – the various modes are all over the place. You have a set of icons (like on a smartphone), and you swipe between pages of them (like on a smartphone), and tap to select (like on…you get the point). There is no organisation: kids stuff and serious stuff is all mixed up, which makes selecting what you want slow – and handling is everything when it comes to getting that picture.

The Wi-Fi connectivity works really well – clearly Samsung has learned a thing or two in the last couple of years about getting wireless connections into consumer gear – you click on the wireless setting, scan for your network, type in your WPA key and voila!

I suppose it’s necessary to save battery life, but every time you want to transmit something, the camera has to re-connect to the Wi-Fi AP, which takes a good couple of seconds each time. And this is the real bugbear with this camera. It’s really, really slow. It has a processor largely made from molasses and dried snails.

The interface zaps by pretty snappily, but large images take forever to preview. The limitations are not just speed – it also applies to the Wi-Fi stuff that you most want it for – it’ll only upload images of 2MB or less.

Get yer gotchas
There’s a number of these kinda gotchas – the “use your smartphone as a remote control/remote viewer” feature should be awesome, but it only works with Samsung Galaxy S2 and Galaxy Tab. This is mentioned nowhere, least of all on the Andoid market where you get the app from. It installs, and then says “sorry for you, Galaxy-less user”. And judging by comments on the market and forums even on Galaxy the app seems hit or miss for many users.

Samsung is onto a really good product here – it is very compact, easy to use, takes great pics, is flexible, and does that awesome Wi-Fi stuff. But the ‘rushed to market’ feel is just too evident. Get the Samsung SH100 – but not yet. Wait one generation. Then you’re sorted.

Who it’s for:
Someone wanting a very compact (54x93x19mm), lightweight point and shoot that does all the auto, with a bit of manual control – and really wants to upload stuff wirelessly and automagically.

Gear it or Burn it?
Burn. By the next generation it should be a definite Gear. And because this device will largely be used to take pictures of cats, here’s some: