When the iPhone 4S landed and Siri started yammering away on millions of phones across the country, those with iPhone 4’s and 3GS’ bemoaned the lack of the powerful digital assistant. The real reason for Siri being an iPhone 4S exclusive is overwhelmingly simple: it’s all about the hardware.

As reported by CNet, the issue revolves around “special noise-reduction circuitry”:

Apple’s A5 processor includes noise-reduction circuitry licensed from a start-up called Audience, and a chip analyst believes that fact solves an iPhone 4S mystery and explains why the iPhone 4 lacks the Siri voice-control system.

Audience revealed details of its Apple partnership in January, when it filed paperwork for an initial public offering (IPO) of stock. Teardown work from iFixit and Chipworks revealed a dedicated Audience chip in the iPhone 4, but the iPhone 4S integrates Audience’s “EarSmart” technology directly into the A5 processor, the company’s S-1 filing said.

Puzzlingly, the iPhone 4 is fitted with noise-reduction circuitry, but only works when the phone is pressed up against an ear. The A5 CPU however uses built-in EarSmart technology which can filter noise from a short distance away. EarSmart dubs this “fair-field speech”.

Technically, the iPhone 4 can run Siri (those with iPhone 3GS’, less so). Those with Jailbroken phones however, can snatch a port of Siri, care of Spire from the hacking repository, Cydia. Setting it up poses an issue for users uninitiated in the ways of Jailbreaking.

Spire downloads the Siri repository from the lustrous cloud servers in Cupertino, but the complex entanglement of software fiddling begins with setting up a proxy to access an iPhone 4S. This is easier said than done. Thankfully, an application called SiriProxy will help you in setting up the iPhone 4S authentication token.

Ultimately, Spire can deliver Siri to your non-iPhone 4S, but at what cost? The battery will quickly drain, your phone may run slower and your data will be chewed up faster than a Big Mac in the hands of Michael Moore. Be happy with what you have, especially if it’s an iPhone 4S. 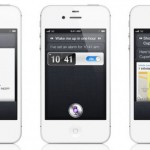