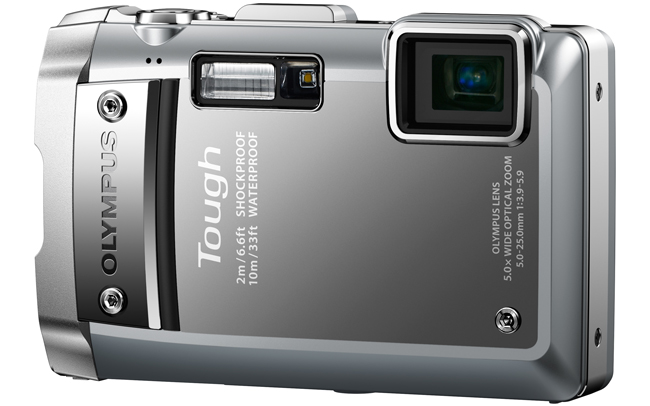 I walked into the editorial office a few days ago, just after a fresh gadget delivery. “Here,” said one of my colleagues, “We’ve got something for you to review”. His gym-calloused hands tossed it my way, just missing the bearded man mountain of a writer who sits between us. It was a camera. With the word “tough” in its name.

Now let’s just get one thing clear, I cry at the end of Gladiator, and Lord of the Rings: Return of the King. Every time. I use moisturiser. Oil free. With built in sunscreen. I’ve even been known to write the odd bit of romance poetry. Knowing all this, my erstwhile colleagues decided this would be the best gadget for me to review. I suppose that’s what you get for having “unafraid of the sun” in your author bio.

Anyhoo, onto the camera itself. Olympus bills the Tough TG-810 as a kind of all round, awesomely rugged can-do-anything camera all in a package about the size of a generic happy snapper. It’s supposed to be shockproof, freezeproof, waterproof and, crushproof. Naturally the first thing we all did was drop it repeatedly. Just to make sure.

Overall Design
The Tough is well suited to its name. Not in an over the top Jason Statham kind of way though. It’s more like Daniel Craig — conventionally good looking but with subtle hints of ruggedness around the edges. There are few circular rivets to strengthen the body work and you have to turn a dial and push a latch to get to the internals. None of this, however, is irritating. It’s a little like drilling a hole into a wall. You know you’re doing something useful but the act itself gives you more pleasure than anything else.

The Tough may not be the first and last word in ergonomics, but why would you care? You’re rugged. You consider a day without scrapes and bruises wasted. Performance
In order to gauge whether or not the Tough does what it says on the box, I decided to put it through a series of rigorous tests.

Full marks on the tough part of its name then, but does it live up to its maker’s mark? Olympus is, after all, a camera brand with long and prestigious history. It’s no good having a tough camera if it doesn’t take great pictures of all the adventurous places you’re taking it to.

Well I’ve got good news for you on that front. The Tough performed brilliantly under every condition I tested it in. Even when I was fooling around underwater in low light, picture quality wasn’t compromised. The only slight glitch I noticed was the screen tended to get a little noisy in some indoor conditions. Then again, why the hell are you using this thing indoors?

Battery
The Tough comes standard with a Lithium ion battery that Olympus claims is good for around 220 photos. Not bad, just don’t go thinking you can dump it for a week after photo 110 and expect to pick it up and take another 110 photos. This is a real-world battery, not one torn out of the pages of a Sci-Fi novel.

Features
What, being able to take photos and survive your hardcore, adventurous lifestyle isn’t enough for you? Okay, fair game. The TG 810 comes with nine modes, including a “magic filter one” that makes you feel like you’ve got Photoshop on the camera itself.

It also comes with 36 scene modes that cover everything from landscapes, to underwater macro shots, to cat portraits. If there’s any specific mode that Olympus left out, please, don’t tell me.

Peripherals
As well as the usual straps and cords that come standard with a camera, the Tough features a bright orange arm strap, that doubles up as a sort of life jacket for the camera. You’d think swimming with it would be a little like having a water wing around one arm. It really isn’t though. Most of the time it fits perfectly into your natural stroke and, at worst, it’s a minor inconvenience.

Impressions
A good gadget fits into your lifestyle. A great gadget makes you want to change your lifestyle. This bad boy wants to make you climb mountains, zipline through forests and jump off cliffs into the sea. I love it.

Gear it or Burn it
Gear it like the adrenalin junkie you are.