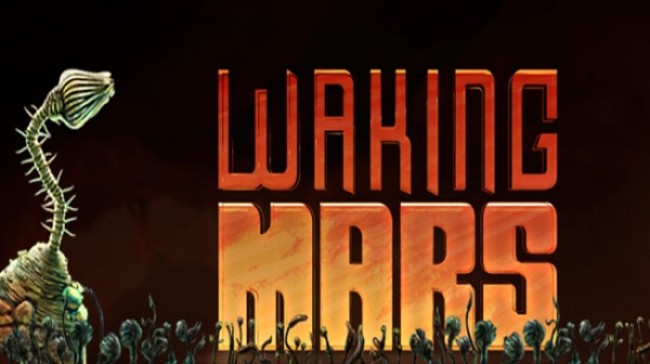 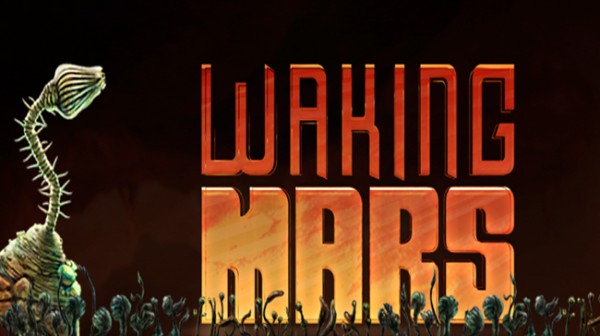 Puzzle-based exploration flourishes in this unique game for iOS. Impressive interface, controls and ambience make this a must play despite its awkward length and uninspiring plot. Waking Mars is a flawed treat.

Waking Mars comes out for iOS amidst a sea of casual games in the mobile gaming world. It is that rare thing: a long-form game. Clocking in at 6-10 hours, depending on your ecological proficiency, game developer Tiger Style’s latest offering is unique in every way, for its sins.

It is 2097, and humans have discovered life on Mars. Contrary to many Mars-based movies, a small team of scientists is sent out, not to destroy or exploit that life, but to study it.

An untimely accident sees the team trapped by a cave-in and now, with time running out, they must achieve what they set out to do — travel deeper into the underground ecosystems of the Red Planet to learn and, ultimately, master those very same ecosystems.

You play as Dr. Liang — astrobiologist and star gardener. No you won’t be planting carrots and beans, but rather ‘Zoa’ seeds that can be used to breed ‘Phyta’s’ who feed ‘Larians’. “Say what?” you ask — indeed.

The learning curve of the game is noticeable, but never daunting. A trusty A.I. companion named ART logs research of everything you encounter on the foreign planet. You can easily access this information and take your time to familiarise yourself the planet’s intricacies. Liang’s goal is to find out every life form’s diet, reproduction, predation, vulnerabilities and defence mechanisms. There are a few extra traits unique to certain plants and creatures that add a bit of spice to this ecological dish.

The game is basically a series of chambers that you travel through from one to the next planting and developing life along the way. Each chamber consists of a set number of soil patches. Liang must collect seeds and plant them appropriately on these patches, doing so results in the world coming alive before your very eyes. 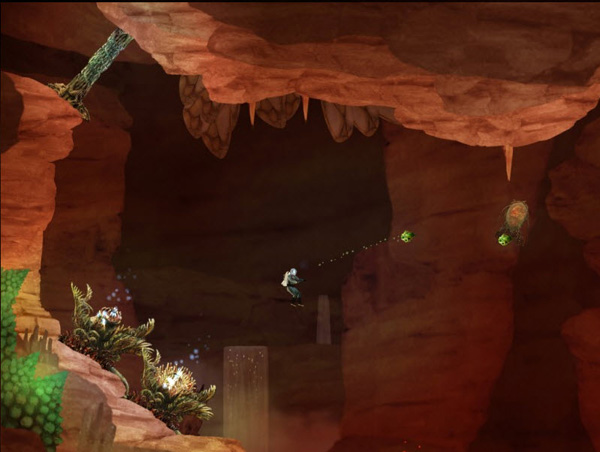 Liang has a trusty jetpack that guides him through the caverns, and with no visible control mechanism you simply touch in the direction you want to move. If that direction is off the ground Liang will automatically take off in his jetpack. This is an exploration game at heart, and how Tiger Style has made exploring a blast. Liang is extremely responsive, and moving around is only hampered every now and then by a pesky rock edge. For the most part it’s a pleasure guiding him around.

The caverns themselves are screaming to be filled with life. Beautifully drawn levels really give a sense of depth to the caves. As Liang moves from tight to open spaces the camera angle adjusts automatically from close to zoomed out. This is achieved with great skill from the design team, and the claustrophobic nature of tunnels and small areas is amplified, as is the scale of the larger caverns.

Blocking your progress from one chamber to the next are ‘cerebranes’. These are, in essence, a door waiting for a key to unlock it. The key is ‘biomass’, or the number of life forms you have in that chamber. Get the right amount of biomass, and the cerebrane merely dissolves, allowing Liang to progress deeper. 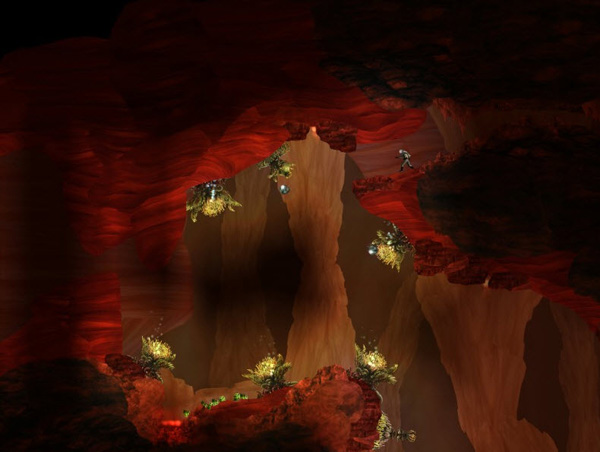 The gameplay is ironically the weakest part of Waking Mars. It is a beautifully paced game as you are introduced to new life forms for the first two to four hours of play time. These are the best parts: learning and exploring while unlocking new tools to help grow your ecological Xanadu’s.

However, after those first two to four hours, the game falls into a bad tedium: fill the bar to progress. With no new plants, creatures or life forms coming your way the game begins to drag as your goal simply becomes to get enough life forms (to create biomass) to open the next area.

This is the conundrum of a long-form game on iOS. With a platform dominated by casual games, it seems Tiger Style has attempted to please everyone. Having a sophisticated story and gameplay mechanics while remaining casual in its controls and depth would have worked, had the game been shorter, or the storyline been fantastic.

And unfortunately it isn’t. The story starts off with a bang, and keeps up the atmosphere of an interesting Mars tale for the most part. It also has three different endings, which adds a bit of incentive to keep playing, but whether these endings deliver is not that convincing. For its ambitions though, the story is still one of the most impressive on iOS, just not when compared to certain PC or console titles.

Waking Mars should be praised for its presentation though. From its menu to its graphics and its wonderfully minimalistic controls, the game is polish personified. The menu operates on a tablet device so intuitively, and reading about the lifeforms is as much a pleasure as is guiding Liang on his journey.

The in game sound and music is also a highlight. It has one of the best soundtracks around (available separately), and great beeps, bops and alien noises help get across the incredible atmosphere of a science fiction tale.

Waking Mars is worth playing through for its high quality presentation, solid, if not breathtaking, storyline and really fun controls and exploration. It’s a fantastic game for four hours and had it stayed that length, or upped its gameplay depth to sustain it for the full game, Waking Mars would literally be the best game available for iOS.

As it stands it is a unique, beautiful, but flawed game. One that focuses on learning and exploring rather than fighting and killing, and for that alone deserves recognition. It’s a new benchmark – one that game designers can learn from, and take even further.