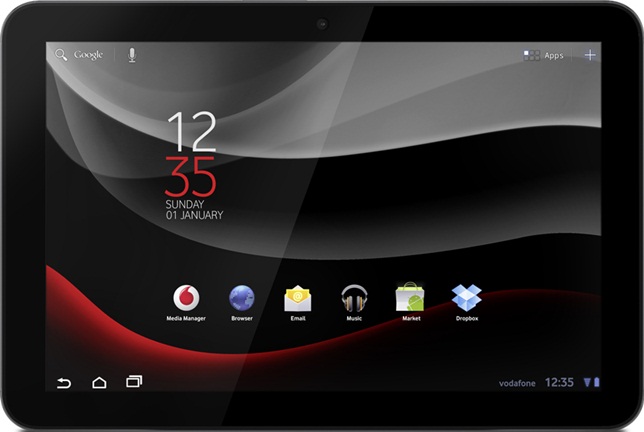 Ah man, the sense the excitement in the Vodafone boardroom when its latest product was unveiled must have been palpable. A tablet! And a 10-inch one at that! At least one person, caught up in a state of self-congratulatory revelry, must have dared to think: “Look out Apple, here we come”.

Good news, Tim Cook and co. The Vodafone Smart Tab isn’t the device that’ll knock your company back to the nightmare days of the late 90s. It’s a decent tablet, but iPad killer it most certainly ain’t. Let me explain:

Look, there’s only so much creativity you can fit into a 10-inch rectangle, but Vodafone (okay, the tablet’s actually made by Chinese manufacturer ZTE) does seem to have gone for a bare bones approach in the design department — uniform thickness, some metallic trim and a rubbery back. Most of the buttons and holes lie flush with the trim, barring the volume buttons (which kind of makes sense) and the recharger socket (which makes a lot less sense).

The kind of people who consider a room with pristine white walls, two or three barstools and a low glass coffee table to be fully furnished would probably consider it quite stylish. Personally, I prefer things to be a little more dramatic. I want swept curves, and innovative materials. The Smart Tab has none of these elements.

This is actually a bit of gripe I have with the tablet market as a whole. We’ve had netbooks in the racing colours of MotoGP champions, and ones with casings done by famous fashion designers. For the most part, the choice you get with tablets seems to be black or white.

The market’s pretty crowded now and loads of manufacturers are getting similar specs out of their devices. For the love of God, give me something that’s going to make me wander over to your display in the store. Set yourself apart. Make us feel at least of some level of childish delight about your device.

The Smart Tab 10 rocks a Snapdragon Dual Core 1.2 GHz processor, 1GB of RAM and 16GB internal storage, so it should be able to handle pretty much anything you can throw it with aplomb. It doesn’t.

Perhaps the most vivid illustration of this is the two to three second lag you experience every time you switch between landscape and portrait mode. In the grand scheme of things, two seconds isn’t much, but in a world where most people will give up on a website that takes longer than the blink of an eye to upload, it’s a lot.

The touch meanwhile is like being in a bad relationship. Just as you think things are going really well, it decides to completely ignore you, despite the fact that you’ve been using exactly the same motion that was working so well just a few moments before.

I also feel like that processor is capable of better than the 43 seconds it takes the Smart Tab to go from off to running.

Interestingly, I haven’t been able to find any claims from Vodafone about the battery life that go beyond calling it “long life”. I could be equally vague, and call it “great”. In the interests of reliability, however, I downloaded a top-rated benchmarking app and set on its merry way. Nearly 12 hours later and the battery was still on 30%.

The Smart Tab boasts a 5MP rear camera and a 2MP front camera. The marketing bumpf also claims that it’s capable of recording in 720p.

The pictures from the rear camera are okay most of the time, but the moment you take it out of a really well lit area, the images start getting a little noisy. No flash means this a problem you’d just have to deal with. You’ll have exactly the same issues with video recording. Then again, if you’re the type of person looking to set up moody low-light shots, I doubt you’ll be using any kind of tablet to do so.

It’s unlikely you’ll use the front camera for anything other than video calls and it’s more than up to that task.

The 1200X800 display is right up there with some of the best on the market and I was happy to note that some of my favourite games from the iPad 2 (including gladiatorial combat fest Blood and Glory) looked just as good on the Smart Tab.

The Smart Tab sports a refreshingly vanilla flavour of Android Honeycomb 3.2 It’s nice to see an OS that hasn’t been tweaked to the point of completely ruining the tablet experience. Whether or not it’s set to get the long-awaited Ice Cream Sandwich or even the recently confirmed Jelly Bean is another issue entirely.

Looking back now, it’s easy to see how instrumental the iPad was in heralding the tablet revolution. A few had tested their feet in the water before but none had taken the full plunge. In a post-iPad world, it seems everyone wants a piece of the pie. The thing is, far too many manufacturers are just trying to copy Apple’s success by pushing out a tablet and slapping on an Android OS.

Don’t get me wrong, the Smart Tab is competent, but that doesn’t stop from being just another almost-clone. It’s a symbol of what’s wrong with the tablet industry, big and booming as it might be. Someone needs to start thinking outside the seven to 10 inch box. Racing stripes might be nice. 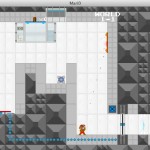