The new BlackBerry Curve 9320 leaves nothing to the imagination. It runs BlackBerry OS 7.1, has the same look of previous Curves but with a “better keyboard” according to a Vietnamese site which has been lucky (can we say lucky when it comes to a BlackBerry?) enough to preview it.

The specs are underwhelming at best, so we can guess that this will be a budget phone that slots in at the US$150 mark. The 9320 has a single-core CPU (retch), 512MB RAM, a 3.2-Megapixel camera and a sizable battery. What interests us is the improved keyboard which is said to be thinner than the options offered on Curve devices. In reality, BlackBerry only has one ace-in-the-hole, namely its messaging services which compresses wireless data to alleviate network strain. If the 9320 rocks an easier keyboard, user interest may pick up once more. But we won’t hedge our bets on this horse pulling RIM back into the limelight.

In short, the 9320 is another budget phone from the company who’s starting to wake up to the what it’s customers want. Let’s see how it plays out. 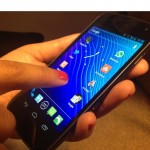