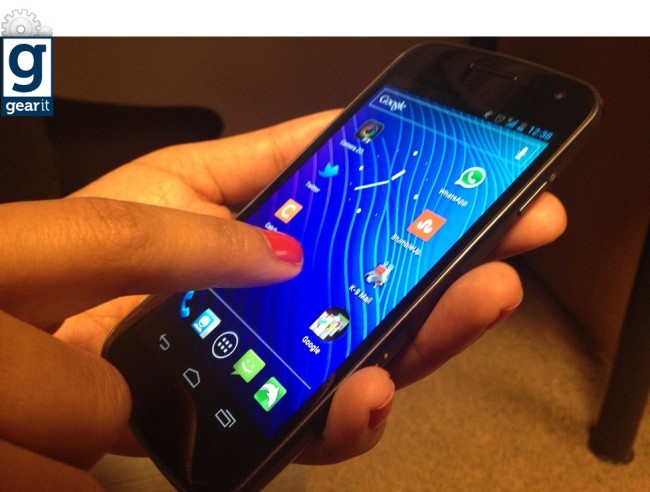 If brilliance is a crime, Samsung’s Galaxy Nexus is a mass-murderer.

From tip to toe, the Nexus exudes class. It doesn’t have the glass and metal knockout combo of the iPhone 4S, rather a plastic shell with a screen which seems to melt into the sides of the phone. At 135g, the Nexus is a heavyweight which is baffling considering the all-plastic exterior. We can chalk this up to the massive battery which lurks inside.

Run your finger along the rear of the Nexus and you’ll feel the richly dimpled back which curves ever so slightly on the bottom of the phone. The sides are matte black but again, it’s the screen, which is intimately curved and allows for better viewing, which steals the show. And this is Android 4.0, lovingly referred to as Ice Cream Sandwich so physical buttons now become relics of the past. In place of “Home”, “Menu” and “Back buttons are virtual keys which lay the smack down on physical hardware. Apple’s “Home” button seems like a cruel joke now, software keys are clearly the way to go and free up a sizeable portion of screen landscape.

The only physical buttons are the “Power” and “Volume” buttons, both located on the sides of the device. The buttons are thin and unobtrusive, but even these will have their time. One day we’ll be faced with a phone devoid of buttons of any sort, and the Nexus is one step closer to that dream.

With the Dual-core 1.2 GHz Cortex-A9 CPU and PowerVR SGX540 GPU, the Nexus is a speed-freak’s dream. Everything flies on the Nexus, from the browser, to 3D games, to camera apps and everything in-between.

While benchmarking apps may feel arbitrary, I did it regardless. I used CaffeineMark and the Nexus scored a very healthy  9033, which according to the top ten list on the app, makes the Nexus one of the fastest phones on the market. Hard to argue with stats like that, but I’m sure there will be arguments in the comments despite my thoroughness. Just to clear things up, the fastest mobile device on the market is the Texas Instrument Blaze, but this is a developers only tablet, so hands off. It’s still one of the fastest phones in the world, so you get what you pay for, which is plenty.

Real-world tests were far more promising. Everything just loads in a snap on the Nexus. I ran Google Earth and it flew, like, off the wall man. The map spun smoothly and zooming into different areas was a breeze for the phone. I zoomed in so much, I almost expected to see myself sitting there at my desk, typing away as the Nexus burnt a hole into my desk from pure, blazing speed. But that would never happen owing to Google Maps being grounded in reality, and not a Will Smith action film.

Overall, super-fast, buttery-smooth and future-proof are all words I’d use for the Nexus and look, so I have.

Here’s the selling point itself. The 4.65-inch, full 720p, 316PPI screen is one of the best displays on the market. While it can’t beat the iPhone 4S 326PPI, it comes pretty close, but still loses out on a few pixels. But screw that, you’ll hardly notice the loss.

Colours are pin-sharp, vibrant and LED style sexy. Images are never washed out and seem almost, excited? No, that’s not it. Images are alive again. The massive, close to the size of the Galaxy Note screen doesn’t defy belief, but it makes most phones seem tiny in comparison.

Gaming and HD video in particular looks extremely vibrant on the Nexus. First person shooters shine, 1080P content practically leaps off the screen and the buttery refresh rate updates the display at a rate of knots. Well done to you, Samsung.

I haven’t had much time with Android 4.0 or Ice Cream Sandwhich, but suffice it to say anyone could jump right in and start enjoying this slick OS. It’s nothing sort of a total redesign, with new fonts, the software dock and happily, you can create custom folders by dragging apps onto each other. Thanks, Apple.

Near the bottom of the screen is the recent apps button. With a flick and a gesture, active apps appear on the screen and can be selected or closed with ease. It’s an excellent OS addition and last seen in the Honeycomb OS, which was made specifically for Android tablets. The keyboard is fantastic. It appears quickly, the feedback is spot on and typing recognition is best-of-class. Another positive notch in Ice Cream Sandwich’s belt.

My Android OS experience began with Froyo, Android 2.2. It was by far and worst, the plainest OS I’d ever used, outside of whatever that abomination on the N9 is (Meego, of course). Android 4.0 is therefore, the cream of the crop. Face unlock, Google apps a-plenty such as Google Chrome, a workable text-to-speech function, a smashing Contacts app, NFC compatibly and data managment rounds off a very impressive package, if you know what I mean. And I think you do.

The 5-megapixel camera is unremarkable, save for the large, crisp screen which functions as the viewfinder. Sure there is better cameraphone hardware on the market (the 8-megapixel iPhone 4S), but it ultimately boils down to picture speed and this is where the Nexus excels. Picture taking is practically instant and the almost invisible UI goes a long way in establishing the Nexus camera software as a top-end contender.

Specs-wise, the 5-megapixel camera shoots in 1080P (full-HD), has an LED flash and a front facing 1.3-megapixel camera. In terms of software, the camera begins to steadily improve as the interface effortlessly embraces zen-like functionality. I’m especially impressed with the panorama mode, which lets you sweep your phone across the room or an outside area to create a fairly decent panoramic shot. It’s the ease of the panorama interface which sold it for me.

Is the camera too fast though? Pictures taken in rapid succession can be blurry, thanks to auto-focus being unable to catch-up. This is a minor niggle though.

The Nexus supports every data connection known to humankind, plus the burgeoning wireless technology called LTE. And hell’s teeth, it’s fast. I managed a solid 7Mbps outside in an area with decent signal, and 2-3Mbps indoors. This is by far and away the fastest data connection I’ve ever experienced.

As for its performance as a phone, it helps that the Nexus is so damn light. Calls were crisp and rarely dropped. Can’t beat that can you?

Battery life seemed to extend to two days with average usage. Watching content cut this in half, and using the phone as a Bluetooth 3G modem cut the battery life even further. Overall, it beats most phones and for a screen of this size, two days of usage is fairly incredible.

It’s hard not to be impressed with Samsung’s Galaxy Nexus. The screen is big, bright and bursting with bravado. It’s faster than a greased up weasel skating down a hill of butter and Android 4.0 is one of the best OS’ to ever grace a phone. Combine this into a smartphone, and you have a future-proof, must have device or what I like to call, my next phone.