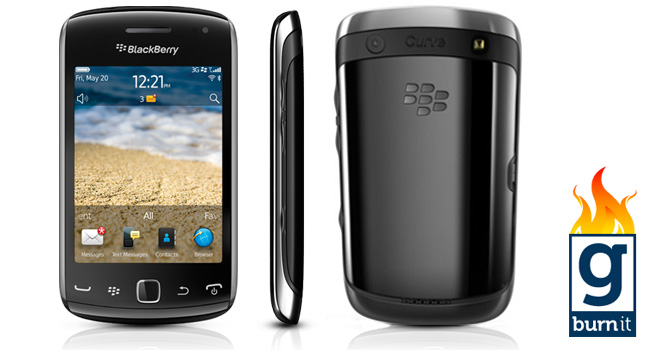 When the BlackBerry Curve 9380 arrived, it sat quietly on my desk for about five minutes, just looking beautiful. The soft light from the nearby window hit its silver edging and the screen in a way that made it look like it was gently glowing. I think this, along with its sleek curves and menus that transitioned seamlessly as I happily swished around on the touch screen, induced a stupor that convinced me to say something along the lines of “I’m never giving this phone back”. An hour later, I was contemplating what a satisfying sound it would make if I threw it at the wall.

Death. By. That. Touch screen. Ok fine, my current phone (a BlackBerry Curve 9300. Don’t laugh) has physical buttons, so I expected a bit of a learning curve as I adapted to navigating the phone with just my fingers and the screen. But I almost blocked my SIM card because I entered my PIN code incorrectly twice on that monstrosity, even after typing as carefully as I could. I don’t think my hands are abnormally large, but the phone made me feel like a cumbersome giant. Every message I typed came out as a potential submission for Damn You Auto Correct.

A while later, I had calmed down (seriously, I had to take a walk around the building I was so frustrated) and decided to give the 9380 another chance. After I’d downloaded a suitably bright theme and transferred all my files across from my real phone using BlackBerry’s (pretty epic) Desktop Manager, the 9380 and I were getting on much better and I began to realise it wasn’t all bad.

The 9380 is BlackBerry’s first full touchscreen Curve model, and it is very pretty. At 109 mm tall and 60 mm wide, it is the same BlackBerry size that fits perfectly in your hand, but is just a bit skinnier than most at just over a centimetre thick. It’s light too — at 98 grams, it would have flown gracefully through the air if I’d chucked it at the wall…

Anyway, it has five (non-touch) buttons on the front at the base of the touch screen — thank goodness BlackBerry decided to keep the little optical trackpad, which is great for precision work (like scrolling through menus, fixing spelling mistakes and moving the mouse pointer around finicky webpages).

Previous BlackBerry users will find the standard set up familiar: volume control keys are on the right hand side and the convenience key is programmed to start the camera, but the buttons are just the merest of protrusions and the lock/unlock button is hidden inside the curve of the touch screen at the top of the phone. Told you it was pretty.

This phone has an 806 MHz CPU and runs BlackBerry’s latest — OS 7. It switches from landscape to portrait mode without hesitation and loads menus and apps quickly. It has customisable home screen panels, which makes navigating to your favourite apps a breeze as you can group them according to your preferences, and collapse or expand the menus completely if you’d rather just see your wallpaper and not rows of icons. It never froze or even hesitated as I switched between the panels, or when I opened, closed or suspended apps.

The only time the phone ever paused and presented me with that dreaded ticking clock icon was when I was installing updates from BlackBerry App World — so no multitasking while installing the latest version of Facebook (which I suppose was wishful thinking on my part in the first place). Unfortunately, BlackBerry App World is still only really stocked with a limited mix of the main apps you’d expect (Facebook, Twitter, Windows Live Messenger, YouTube, Wikitude and Gtalk are preinstalled) and a bunch of strange things I wouldn’t download if you paid me. Some of the apps that I used on my 9300 weren’t available for the 9380. Boo.

The universal voice search was super-fast and successfully blew my mind — it picked up nine out of the 10 things I asked it to search for, first time. The only one it missed was when I called out a contact’s name — it used the alternative spelling, so it couldn’t find him in my address book. That’s how good it is.

Well, I’m sure you know how I feel about this already. The 9380’s capacitive touch screen isn’t the greatest — I think it’s because the letters on the keyboard are too close together, even in landscape mode. The screen is just too small for the entire alphabet. The phone does compensate for this with a brilliant predicative text option, which picked up and corrected even my most horrendous spelling mistakes. By the second day I’d given up on spelling and grammar all together and left it all up to the phone to suggest what I was actually trying to say. Although the input system crashed about once a day, it restarted immediately without losing the draft, so I forgave it.

The screen is very responsive — I never had to click multiple times to open an app or type a letter — but it doesn’t distinguish between swiping and clicking very well. Trying to scroll through a menu or Twitter or Facebook feed was annoying, as I accidentally opened links and apps when I was just trying to scroll. It may sound minor, but when it happens five times a day, it gets to you.

After a week, I could type with only one or two mistakes in a sentence — still not perfect, but an improvement — but I still wasn’t tweeting or messaging as much as I did previously because it was simply too much of a hassle, especially to type longer messages. The swiping problem remained, which meant I had to resort to using the trackpad for scrolling and for navigating menus that were too small for my fingers. Switching between the touch screen and the buttons for simple tasks isn’t the most efficient way to live.

The phone has 512 MB of RAM and 512 MB of internal memory — but it comes standard with a 2GB microSD card, which should be fine for most users — and it is expandable to 32GB, if you’re not one of them. The 9380 comes with a relatively decent 5MP camera (2592 х 1944 pixel photos) and a killer LED flash that is so bright you can see it from the next room. The camera has a bunch of cool features like face detection, geo tagging and scene modes — so you can switch between portrait, landscape, party, sports, close-up, beach, night and text modes, depending on what you’re photographing.

Although I can’t say I found the text or close up modes very impressive – objects close to the lens were still blurry and text was fuzzy around the edges, and the camera doesn’t have an autofocus function. There are full size test shots taken in the close up, landscape and auto modes if you don’t believe me. It can only record 640 x 480 VGA videos (no HD video for you) and the phone doesn’t have a front-facing camera, so no video calls either.

The browser wasn’t life-changing — it doesn’t support Flash, there was a lot of checkerboarding if you pinched and scrolled too fast and the webpages resized and stuttered strangely when I zoomed in and out. The pages loaded relatively quickly and videos played continuously after a short initial buffering period. The browser allows you to open multiple tabs, which was probably the coolest feature. The phone also has Near Field Communication technology, plus the usual round up of Bluetooth, GPS and Wi-Fi 802.11. The call quality is great, the loudspeaker fared well and the phone picked up my mutterings from a metre away.

The battery is a cryptographic Lithium construction called the JM-1 and doesn’t last much more than a day, depending on how much you use it. I have three email accounts synced with my phone, and I run Whatsapp, Twitter and Facebook throughout the day, so I wasn’t expecting much. But it lasted around 14 hours on most days.

The Curve 9380 has a lot of features for a budget BlackBerry smartphone, but I feel as though all of those are secondary to what you need to use your phone for the most – to type.  I really wish there was some sort of middle ground between ‘burn it’ and ‘gear it’ in this case… It’s a good little BlackBerry with only a few minor issues, besides its fiddly touchscreen. If you have childlike fingers, gear it.

But, let’s be honest, I don’t, and I can’t wait to hand in the review model and return to speed and efficiency. I feel as though all that touchy-feely-ness is unnecessary and is detrimental to all the general awesomeness packed inside. I think that I would like its sister, the Curve 9360, more — it has practically identical specs but has that lovely BlackBerry QWERTY keypad we know and love (plus, it’s cheaper).

Do you own a feature phone, or one of the older BlackBerry Curve models? Do you love BIS and BBM too much to get an Android handset for a similar price? Do you not want to spend a fortune on a touch screen phone? You’ll like this. Do you like typing while you’re walking and answering messages rapidly with minimum fuss? Ya, find something else.