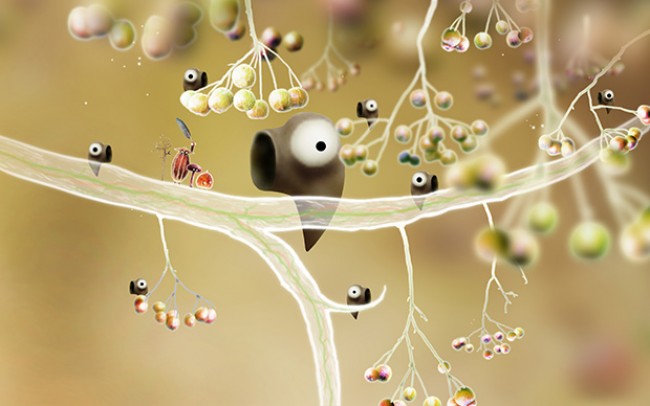 What do Mr. Lantern, Mr. Feather, Mr. Poppy Head, Mr. Twig and Mrs. Mushroom all have in common? Well a quest to save the last seed of their home tree of course. Confused? You should be.

One thing you shouldn’t be though is surprised. Coming from the hive mind of Czech company Amanita Design, Botanicula is a product of love. The company is known for its games brimming with imagination, bursting at the seams with gorgeous visuals, clever puzzles and colourful characters. Botanicula seems right at home.

We first saw it in Samarost, and then in the quite fantastic Machinarium. That game: an ode to all things scrap metal and inorganic is perfectly contrasted to Botanicula (say that fast three times) with its world of bioluminescent tree branches, tree critters galore and a quest to save micro-organisms. It is quite fitting that if you buy Botanicula today, your purchase will contribute towards the World Land Trust, a charity whose funds go towards saving rainforests and their inhabitants. The game’s tagline should read: Save the seed save the world, buy the game save an acre of rainforest.

Just as in its previous outings, to succeed at an Amanita Design game you must explore. And to explore this lovely world you must click, click, and click away. The micro-tree world is cunningly divided into self-enclosed, but all the while linked, screens or zones that are all screaming to be interacted with.

Little details wait in hiding for you to find them. Wave over leaves to see them blow in a proverbial breeze created by your mouse (or finger when touch versions come out), or click on a box to have it opened a plethora of times, each one emitting a new present full of surprise and wonder. If the game doesn’t challenge you as much as Machinarium, it sure as hell will entertain you.

Your five main protagonists each come with a ‘power’ of sorts. Mr. Lantern glows, Mr. Feather flies, Mr. Poppy Head can take a fall and float, Mr. Twig can find a way into those hard to reach places (perhaps related to Mr. Mildew) and Mrs. Mushroom has a more than handy bouncy head.

Fortunately there is no punishment if you choose the wrong ‘power’ in a situation. In fact there is no way to die in Botanicula at all, you’ll merely be greeted by a quirky animation and sound effect, laugh it off and move on. It is this humour that shines time and again as you progress through the all too short three-five hours of gameplay.

The puzzles are, for the most part, well thought out. They won’t be revolutionising point-and-clicks as we know it, but they work well within the context of the game. Most solutions are in the same screen or one or two away from their original puzzle. You’ll never have more than a couple of items on your person, and these can only be used in the areas that they are needed. It is this streamlined gameplay that leaves nothing to do but explore, and that’s what it’s really about.

The only complaint is that the puzzles lack a touch of variety, and for a game full of unusual characters and a truly original world, the puzzles seem all too straight forward: collect this, match this, remember this, quick-time this. However, perhaps it is the use of familiar puzzles that keep the game from becoming completely foreign and unappealing — something the designers might have feared after being so out there with everything else.

Words cannot do justice to the simply gorgeous world of Botanicula. From the cleverly presented ‘zones’ full of biodiversity to the ambient and charming soundtrack… masterpiece comes to mind. The cast of characters is without limitations: propeller propelled light bulbs buzz around your head while a giant tortoise lazily strides towards food in what can only be an equally giant hermit crab’s shell. Each character you encounter will unlock a card (with enough clicks of course), a catalogue of creatures, that is the closest thing to achievements or trophies in this game. The soundtrack is just as bizarre: eclectic sound effects all done with the human voice are layered with jazz, ambient and folk aspects. It’s as if Radiohead recorded with a full brass band, but everyone had a stroke at the same time. 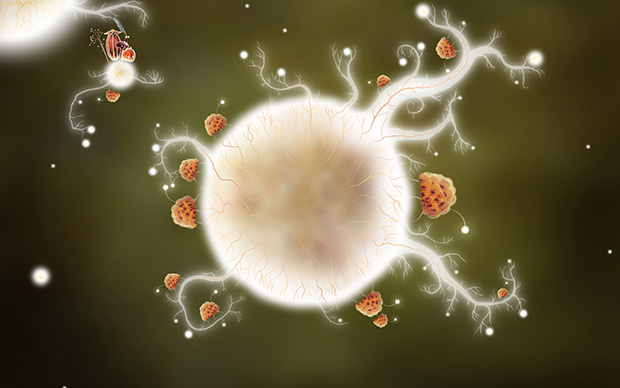 Given its peculiar narrative, presentation and sound, the manner in which you purchase Botanicula is also somewhat unusual. In the form of the ‘Humblebundle’, Amanita Design has put the ‘pay-what-you-want’ model into creative use. If you purchase the bundle before 3 May 2012 you’ll not only get Botanicula but also their previous games Samarost 2 and Machinarium as well as the soundtracks for Botanicula and Machinarium respectively.

If you pay US$5 or more, you’ll unlock the games on Steam. If you pay over US$8.81 (the average), you’ll receive a bonus Czech film called Kooky about a small boy who has to throw his favourite teddy bear away and a small game called Windowsill.

The pay-what-you-want model is taken even further as you choose where you money goes: how much for the developers, how much to World Land Trust, and how much to their bandwidth host. It’s the most empowering purchase you’ll ever make.

Botanicula is less a game and more an exercise in exploration and interaction. With dozens of screens all filled to the brim with life and secrets waiting to be found, yes it may only require clicks, but these will be the most rewarding clicks of your gaming life. Some truly original visuals accompanied with a contender for soundtrack of the year make up this design-feat: one so out there it might you off. Don’t let it. Pay-what-you-want and go down the rabbit hole. It’s well worth it.