By Steven Norris: grumpy curmudgeon
Read nextSpotify is cool, but jamming to it with your friends is cooler 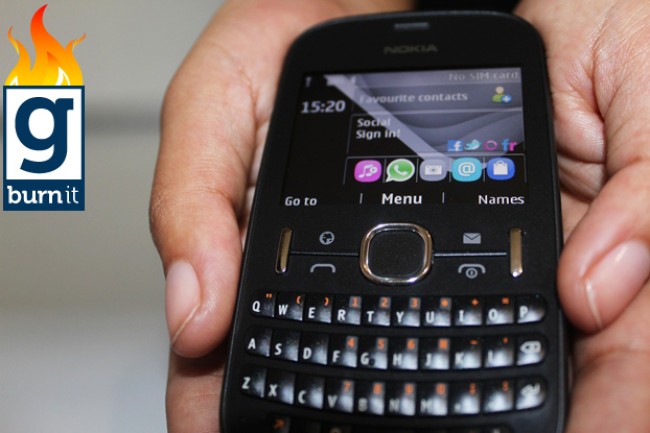 First impressions last the longest and if the Nokia Asha 201 was a person, I’d have slapped the taste out of its mouth the second it started speaking.

Straight off the bat I can see that the Asha wasn’t made for me. It’s for the teens/tweens you know? The young at heart, the carefree who don’t give a damn about responsive touchscreens, a decent camera, a fast display, a modern look or anything of that ilk. Onto the review.

“Not terrible” is the phrase I’d associate with the design of the Asha. “A total clone of the BlackBerry Curve” is another. It weighs about as much as a cheese sandwich (without tomato please) and has that nice, cheap plastic feel of the best bargain-bin feature-phones. The keyboard holds a special place in my heart, as it’s one of the worst keyboards I’ve ever used. The keys are frigging tiny and people with normal sized fingers or “adults” will struggle to type even the most rudimentary of sentences. The directional pad is not bad though, pity about the interface lag in almost every area of the phone. More on that later. Join the QWERTY revolution says Nokia. Not a chance in hell, says I.

So we’ve established that it’s a cheap phone. But is that a bad thing considering the ultra-low price? At well under US$100, the Asha is easily placed in the pocket of practically anyone. But screw that. I’m a discerning buyer and I don’t want any phone. I need something that does everything, not some inexpensive Nokia phone vomited into my hand. Sure, it can do a few things which the big boys can do, but it does so slowly it hardly seems worth the purchase.

And why, oh why does it use the old Nokia plug instead of a MicroUSB charger? Do you know how fiddly those things are? And if (when) it breaks, you’re going to have to purchase another damn charger instead of simply popping in a random microUSB charger — which technosexuals have millions of.

Poor. This isn’t a phone for watching HD videos, playing the latest games or using as a portable hard drive. It’s for constantly messaging your buddies. And for that, I’ll give the Asha props. It’s too slow to do anything else, so keep the messages going, reset it every now and then enjoy the constant stream of chatter which is sure to pour in.

Here’s the biggest joke of all: the phone only runs EDGE. No 3G or WiFi access is included. So for a device which is all about Twitter, Facebook, WhatsApp and whatever else, online speeds are a joke. It reaches heights of utter uselessness at times. How is it supposed to function as the heart of the users social life then? Simply put, it can’t. It practically refuses to. SMS and MMS works well enough, but haven’t we evolved past this?

At 320×240 pixels and with a bright, healthy screen, the Asha has a fairly decent display. It won’t win any awards for looks (thanks Symbian) but it’s fairly clear, the text is large enough to read and that’s really all that matters for a phone of this ilk. Gaming even looks fine on the device. It’s a pass.

The 2-Megapixel camera is below adequate. In anything but the best light, pictures are dire. It’s a camera made for quick, dirty pictures. You can mess around with the images, add special effects and what have you. Then, email, MMS or upload to the social networks. It’s all pretty functional, unspectacular stuff. Have a gander at the sample shots below, I’ve also included a video. As a phone, there’s a bit of noise attached to most phone calls. Whether this because of the design of the phones internal radio or the lack of power is anyone’s guess. Phone calls are the past, texting is where its at and that’s the one aspect that the Asha kind of does right.

Here’s the pot of gold at the end of the rainbow. Four days! Four long days passed without the need for a charge. It boggles the mind really. But not quite. Phones of this ilk have always been superior in the battery department. Use it for phone calls, play a game or two and text your heart out. It don’t matter to the Asha, it brushes off power issues like a god would a gnat from its shoulders.

It’s Symbian series 40 folks. That’s the oldest mobile OS I’ve played with in a long time. I mean, damn girl, this thing is old. It’s age shows, and with each button press, the OS seems to get slower and slower. The best word to describe it is clunky.

From reading the review, it’s easy to tell that I was as objective as possible. As such, I hate, hate, hate Nokia’s Asha 201. It’s too clunky, too slow and utterly useless for my requirements. It’s simply another nail in Nokia’s coffin, hammered in by shitty phones like these. Avoid!

Read More
Spotify is cool, but jamming to it with your friends is cooler
Gadget News • 11 May 2012
Read More
More