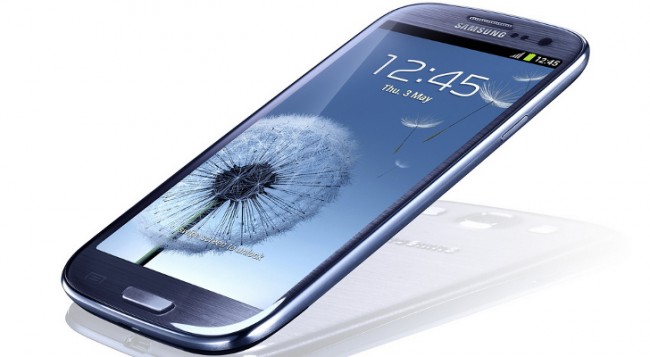 And here we are. Roughly a week after its international launch, we got our hands on the Samsung Galaxy S III. It’s not the phone we expected to see, but it’s still a damn fine piece of tech. Let’s dig right into Samsung’s iPhone eater.

You can’t feel the 1.4 GHz quad-core Cortex-A9 CPU when you flip this glorious piece of plastic in your hands, but you can feel the love Samsung has poured into the design. And holy hell, it really looks like a mega-sized Galaxy S I. It’s gloriously large, but supernaturally thin.

The layout is very sparse and pretty much keeps up with current, minimal designs in modern smartphones. There is a central home key which is rather nice and firm to press. The menu and back keys light up when in use, but remain hidden the reminder of the time spent with the phone. Look, these Android phones work best with a dedicated button, so the Galaxy S III embraces this, and runs with it.

But it’s plastic. Again with the plastic. Sure, it’s 133g compared to the iPhone 4S’ 140g but most crucially it’s bigger and lighter. #Winning for Samsung. We can bet that after a few scratches, this pretty egg-shell white exterior is going to look like crap. We’ll never fear that the glass or shell will break though. It’s a sturdy phone, but will it pass our patented “stamp on it” test? Sadly we can’t test that in the crowded media room.

Eff our lives. We never believed that power could be contained in a device this compact. The Exynos 4 Quad is nothing short of nuclear. The phone is beyond our comprehension of speed. Apps load instantly, there’s nil lag, content is copied across the device and computer in what seems like half the time of normal phones and overall the speed just makes us gooey inside. Here’s the rub: there are no apps that take advantage of the quad-core CPU. So we’re left to enjoy the fastest Android OS in existence, which sadly lacks the apps to truly push it. We have a feeling that console-level games will make their way to the S III, it’s only a matter of time before a savvy developer unlocks this beasts true potential.

We’ve been playing around with the HTC One X for a few weeks now and come to this conclusion: Android’s UI is never going to get any better, so mod the hell out of it. Also, if you’re gonna have an Android phone, make sure it’s the fastest one in the world. Hello Galaxy S III. The UI is responsive and butter smooth. It’s almost as if the phone knows what you’re going to do, and does it. Scrolling is lightening fast, there is no lag and nil screen tear.

We love the quick toggles Samsung has added to the S III. What was once an add-on, is now standard and turning off the 3G, WiFi, Bluetooth and other hardware functions is plain and simple, a breeze. There’s also four-quick launch icons on the lock screen, but we’ll be damned if we could figure out how to customise these suckers.

The S III’s version of TouchWiz is acceptable, but it’s an Android phone so customization should come standard with every users intentions. And lo, there is no dedicated task switch button, as seen on the Galaxy Nexus. For multitasking, long-press the Home button. Less keys, less issues we say.

As for added extras, users get 50GB Dropbox storage for two years of the phones life, as well as Flipboard preloaded. It’s not much, but at least Samsung’s trying.

An issue: sometimes, but not often the S III would pause while an app or setting loaded. For a phone of this caliber, it’s a weird bug but will hopefully be ironed out in software updates. And why for the love of god can’t we create folders like in iOS? Who thought it was a good idea to have to move folders to a “create folder” shortcut? Someone in the UI department effed up but good.

We liked “Smart Stay” though. The S III tracks your eyes and turns the screen off if you’re not looking at it. Nice and gimmicky, but not a deal-breaker.

There was plenty more to test, but nothing we could fiddle with in the short time we had with the phone. S-Beam and S-Voice are present, and we’re sure that S-Voice is just as useless as it always was. We’re team Siri at the Gear.

The 4.3-inch display is captivating and crisp. It’s not the traditional Super-AMOLED screen we’ve come to know and love. It’s a 720p “Pentile” display which holds up surprisingly well in direct light. We did notice the dreaded blue-layer pushing through at certain viewing angles. It’s a small issue which newer Android displays have been experiencing, with the exception of the HTC One X. The screen is nothing if not super-responsive though. It registers touch almost psychically. Spooky,  we know.

The 720×1280 screen is a treat. With Gorilla Glass 2, scratches are pretty much going to have to force their way onto the screen. HD content we managed to test looked like an HTC One X effort (in other words effing gorgeous). Colours were bright, and Angry Birds Space ran like a dream.

The 8MP camera takes crystal-clear shots, and is pretty much on-par with what the iPhone 4S can produce. The camera software is pretty convoluted though, but shots can be taken in an instant, so there’s very little downtime between pictures.

We love the picture-in-picture mode. There was very little time to test this, but one video was loaded and played on the massive screen while we browsed the phone. When we first heard about this mode, we laughed it off. Now it seems like a nifty trick we’d pull out more than once. Also, it seems more like what a laptop would do. It really pushes hardware boundaries.

It’s one of the best phones we’ve ever played around with. Its speed is unmatched, its screen is devilishly charming and this is undoubtedly the best version of Android 4.0 we’ve ever slapped our peepers on. While we can one day wish for a non-plastic phone from Samsung, this is as good as it gets for Galaxy lovers and for mobile phone users in general, it’s a phone which others will scramble to beat. Look for a heavily detailed review once Samsung gifts us with this quad-core treasure. 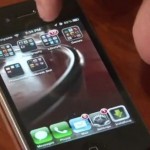