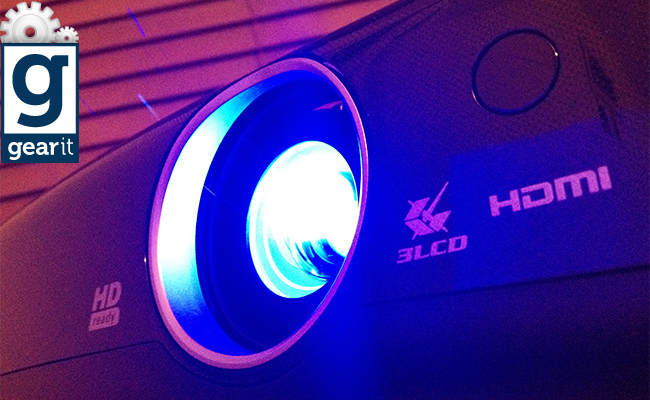 First thoughts: this thing’s a goddamn monster. It’s the size of two Xboxes squashed together, makes a hell of a noise when it’s on and blinds you with its 3LCD display. But then I plug in my laptop via the HDMI port, run a copy 1080p copy of Tron: Legacy and everything’s as right as rain. It’s big, it’s black, it’s Epson’s MegaPlex projector.

To quote its full name, it’s the Epson MegaPlex MG850HD Home Projector. I like to call it “my little cinema”. If you’re a smart shopper, you can grab it for roughly US$650 online and my fellow Droogs, it’s the best present you can give to your eyeballs, outside of a brand new nano-eye. Being a smart shopper is key, as this bastard costs US$700 on Epson’s online store.

Chunky is the best word for the MegaPlex. Fat is another. ‘Heaving like an asthmatic pug’ is maybe taking it too far but it’s my review so I’ll use these descriptions in the way I choose. The MegaPlex is nothing if not carefully designed, despite its exceptionally bulky frame. Carrying it around is made easier thanks to a handle which folds out of the side. The handle is firm, plastic and remarkably stable. Beads of sweat usually pour down my furrowed brow when I cart around a device of this price, but the handle eased me as gently as the Night Mother.

It’s the Mr T. of projectors. A big, bad mother-effer which gives no apologies in weight or bulk. It weighs 4kg, and is 14-inches in width. It’s very easy to setup and thankfully, the cord is a power-supply free affair. I hate, hate cords with power supply boxes. The Xbox 360 power supply is the worst offender. It’s almost as big as the console and could be tied to a snitch if you were in the mob and needed to drown him in the cool, black ocean.

Where was I? The MegaPlex is noisy, but in the drone of the office or during a nice loud film, you shouldn’t really notice. It even balances out nicely, and by that I mean the legs of the projector can be screwed up or down to adjust the height on a bumpy surface. But for a pricey hooker like this, I’d mount its ass on the wall. Over and out!

There’s a skinny, PS3-like remote, but the on-board controls nicely suffice in its stead. The remote is so anorexic that it would slip between the cracks of my couch and I’m scared to stick my hands down there again. Last time something bit back.

Overall, it’s excessively big but a fast, powerful projector was never going to be as slim as paper and silent as the night.

Here’s the thing. It’s not full-HD. It’s not 1080p. Why, but why would a projector for this price not be full-HD? When you go 1080, it’s hard turning back. Your eyes pick out flaws in the image. “Why does it look so compressed? I can’t count the wrinkles on Julia Roberts’ ass anymore damnit!” Frankly, you need to lower your expectations. In the right setting, the picture can go as wide as 60-inches. That’s 60 goddamn mother-effing inches. Do you know how much a 60-inch full-HD LCD TV would set you back? A fortune.

Sure, it ain’t full-HD. But it’s a 60-inch display which for most of us (for me especially) is as close to viewing perfection as we’ll ever get. I don’t want to talk about its boardroom applications. That’s as boring as hell. Sure, you can slip in an iPhone, loaded with content, music and slideshows for a hipster-friendly presentation, but the MegaPlex’s file support is shocking. Jpeg is supported, so is MP3, but try to get 99% of the known video codecs to play and you’ll be in for a bad time.

So the display is reliant on the console or computer plugged into one of the billions of available ports. Here’s the list of inputs, ripped straight from Epson:

Yeah, I know right? If Mr. MegaPlex can’t dock with it, nothing can.

The 3LCD display is refreshingly crisp and as bright as a dying sun. At 2800 lumens, it’s fairly mid-range for a home-theater system and pretty piss poor for the boardroom setting. The MegaPlex digs cold, dark places. Like sex dungeons.

Here’s a winning feature for you, integrated stereo speakers which nicely match the cool aesthetic of Epson’s monster projector. With an HDMI cable (easiest option really), sound and video streams with nary a hitch. It’s an excellent gaming display. Really excellent. Sure, you’ll miss out on Dolby Surround Sound, but you won’t miss out on the trillions of tiny cables associated with a multi-speaker setup. Plug in one cord, enjoy audio and video. It’s so simple it hurts. Again though, daylight is not its friend. Close them shutters!

Before the end comes, the mind-blowing keystone setting should be discussed. If the projector is at an awkward angle, the projectors lens can be tilted around corners practically. A slider on top of the MegaPlex lets you bend light and make you feel like a Vegas magician. It’s fantastic, applause for you Epson. Applause.

So what we have here is an excellent, HD ready (eye roll) projector which projects a 1280×800 display at a goddamn bargain. I couldn’t recommend it anymore if I tried.