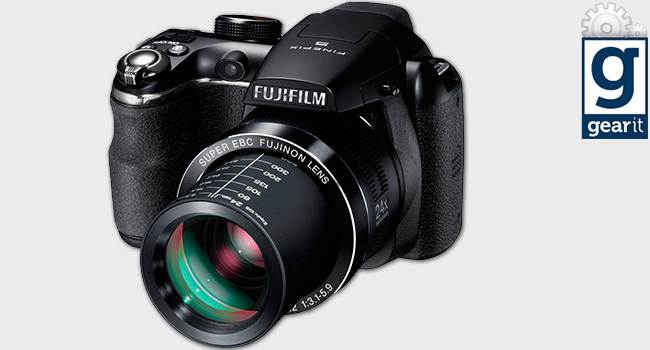 It was just earlier this year that Fujifilm launched its new S-series high-end bridge cameras, but it didn’t seem to have hit many stores in SA yet. What is quite refreshing is that the retail stores selling the Fujifilm cameras was quite in the know about the new range, so at least Fuji is doing a good job marketing its cameras. The S-series (the S most likely an abbreviation for “super”) consists of 4 cameras of which the S4200 landed at the Gearburn office to be reviewed. It is replacing the S4000 which sold for around R2700 so my guess is that the price will most likely remain in that region.

What’s it all about

Out of the box

The camera is a pleasure to pick up and hold. The design is pretty close to that of a DSLR (therefore a bridge camera) and as a result the ergonomics are great. It is quite surprising to find that it’s actually not as heavy as it appears (only 543g), even with batteries. In spite of the light weight it has a good solid feel.

The controls are all well placed and easy to use and give a soft click when the buttons are pressed or the dials turned. The shutter button operates in the same way as that of a DSLR and has a definite first stage for focussing and a second stage to release the shutter. Around the shutter button is the zoom control making it easy to zoom in, focus and shoot.

To the right of the program dial is a Function button which gives you very handy and quick access to changing the ISO, image size and colour.

Also on top is the power button, a button for turning face detection on and off and a button that gives access to continuous shooting options.

Next to the LCD screen is a set of buttons that gives access to the menu options. The functionality of some buttons change depending on the program settings that are accessed. There is also a button for manual adjusting of the exposure 1/3 stops.

To the right of the body, in the grip, is a cover that gives access to HDMI and USB ports.

Below the grip is the battery cover giving access to the 4 AA type batteries and memory card. According to Fuji its choice of AA type batteries is for convenience when on the road, eliminating the need to carry a bulky charger around. It is estimated that 4 AA sized alkaline batteries will provide enough power for shooting 300 frames. I would rather opt for rechargeable batteries and a charger, Lithium batteries will give you double the number of frames between charges.

Although many people would probably stick to the standard auto settings, the camera offers most of the same settings as a DSLR. For the more artistic among us there is ample to play around with.

The menu system comprises two tabs once the menu button is pressed.  The first is the “Shooting menu” where the camera functions can be set and the second is the system settings.  Function settings available depends on the program that is accessed, but includes image size and quality, white balance, sharpness, face recognition and customised flash settings for under or over exposure.

The Program, Aperture priority, Shutter priority and Manual programs are hassle-free and someone used to shooting with a DSLR will adapt to them effortlessly. The Custom program gives some additional functionality that is not directly available in the Manual program.

There are several options for the focus setup and which means that almost every possible situation is catered for.  Focusing is automatic when the shutter button is pressed half-way and pretty fast at it, so there is no reason to miss the perfect shot.

The metering system provides three options, those being the usual spot metering, average and multi metering.

Although I suspect the “S” in the model name refers to “super” as in “Super-zoom”, the camera also boasts a “super” close-up setting allowing one to focus at a distance as close as 2cm. This is quite a nice function and those that love nature photography will find it very useful.

Focussing is fast and appears accurate even when tracking moving objects, thanks to a continuous focussing setting.  Adjusting settings is easy and if time allows, there is much to play around with.

The face recognition works well and even recognised my pet’s faces. And forget about shooting someone with closed eyes ever again thanks to blink detection technology! It’s handy as all hell.

The zoom is powerful and smooth, but once you pass the 300mm mark it makes sense to use a tripod or some sort of decent support. The camera also boasts a digital zoom that further increases the zoom capabilities. I found the optical zoom quite adequate and did not use the digital zoom. An image stabiliser is standard.

The camera is fitted with a pop-up flash. However, not all the programs allow for the use of the flash. The flash is released by pressing a button to the left of the flash.

Although the camera shoots video in HD, it is only at a max of 720 according to the manual and to Fuji. However, the camera provided to us gave three options, these being HD, 1280, 640 and 320. Image samples below.

The camera fits nicely into the hand and controls are easy to reach which makes operating a pleasure.

As I said, focus is fast and appears accurate. However, I was rather disappointed once the pics were downloaded to my computer as most of my shots seemed not 100% in focus and as sharp as I would have liked.

Colours are bright, but the detail is just not there, irrespective of the shooting mode and the settings. Perhaps the Cape Town winter weather was just not very helpful and contributed, but the few shots I got in sunlight was not that much better.

Unfortunately I shot mostly either on ISO 400 or ISO 800 due to the overcast weather thus giving me rather grainy pics.

I also found that at 24mm the picture is somewhat distorted at the edges in much the same way as one would find a fish-eye lens do (15-18mm on a SLR). This distortion only disappeared when zoomed in to approximately 50mm. Although this can give some interesting results when required, it can ruin an otherwise perfect pic. As the zoom won’t function with some programs, one would have to live with the distortion, for instance in the 2cm super macro shots as well as panorama.

On the upside it is an easy camera to get to grips with if you’re not really into photography. You can start by shooting using the auto programs and experiment with the other programs as you get accustomed to the camera.

The use of alkaline batteries just does not appeal to me and I had to replace the batteries not long after I started playing around with the camera. It must be said that some of the Gearburn staff already played around with it, so that possibly contributed to the short battery life. If I ever consider buying this camera, I will invest in two sets of Lithium batteries and a charger, there is just nothing that can ruin a nice outing with loads of perfect pic opportunities, like running out of battery power. However, the use of AA sized alkaline batteries is probably a smart move from Fuji to enter the market with a very competitive price.

If you’ve used a DSLR before then this is not the camera for you. You will just not be happy with the results even though you have pretty much have the same spread of settings to play with. This is a camera for non-photographers who want to create memories of a special outing, family gathering or party and who will be more interested in the people on the pics rather than taking photographs for a portfolio. And as such, I highly recommend it.