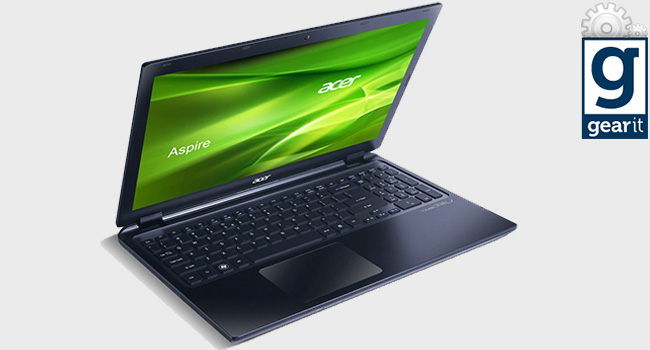 A little over a week ago I was given the Acer Aspire Timeline U M3 (581T) to put through its paces. The good-looking, 15-inch “ultrabook” is Acer’s first proper foray into the ‘ultra’ arena and, unlike many of its competitors, it’s not a straight clone of the MacBook Air. It boasts stylish design, a compact body, great start-up times, good battery life and a few more specs that set it apart from the pack. Read on for the full breakdown.

Laid bare, for the world to see, the M3 Ultra is a great looking machine. The unassuming matt black casing is stylish without being obnoxious and the minimal design slots in nicely with contemporary trends. Open it up, and it’s much of the same with a nice practical edge, it packs a full keyboard with a numpad and a nice big touchpad. It’s constructed primarily of plastic, polycarbonate to be exact, the only exception is the lid which is aluminium, a nice touch that alludes to what could’ve been.

That being said though, the finishing is superb and apart from the cold touch of the metal lid you can hardly tell the difference between components. There is minimal, and I mean minimal, flex here and there but on the whole it feels pretty solid. The plastic chassis also has some added advantages, the machine tips the scales at just over 2kg, is only a little over 2cm thick and Acer managed to squeeze an optical drive into that somehow.

Speaking of which, the tray-loading DVD drive sits on the left side of the machine which also houses a full-size SD card reader, but that’s it. The right side is completely bare as a result of the internal positioning of the cooling unit. So, where are all ports, I hear you say, they’re at the back. All of them. It’s pretty annoying. Back there, you’ll find three USB ports, one of which is USB 3, a HDMI port, an Ethernet connection, the power jack and even the headphone jack.

What that all means is that every time you want to plug anything in you’ll have to get around/behind the screen first, and it’s a nuisance, but more on that later. As mentioned above, the cooling unit sits on the right-hand side and accordingly there’s a relatively small cooling vent on the right back. The front of the body is equally bare, leave for two speaker grills and the power button.

My first issue with the M3 Ultra was with the power button, or more accurately, finding it. It sounds stupid to say it but it took me a good 30 seconds, possibly even a minute to find it. In most contemporary machines it’s positioned near or at the top of the keyboard, or at the very least somewhere logical. Not the M3. The power button is a small silver sliver that sits in the middle of the left side on the front panel. I wasn’t the only one who struggled with this either, I challenged a few friends to “find” it and not a single one found it immediately, then again, maybe we’re just not as tech-savvy as we’d like to believe.

The button itself is awkward to push and offers very little tactile response which can be quite frustrating. Mercifully, the blue power light comes on instantaneously, indicating that you have managed to successfully switch it on. Moving on, I wasn’t overly fond of the touchpad. It’s coated in the same matt finish as the rest of the casing and while it looks great, it sacrifices usability. Often I had to consciously push harder before it properly registered my finger and I found the physical button frustrating shallow, particularly when trying to click anywhere but dead-center.

Like most new(ish) notebooks, the right-hand side of the touchpad can be used for scrolling but I found it more hassle than it was worth, as it often didn’t respond at all, and usually I just switched to two-finger scrolling. Infrequently, drop and drag was also a small issue and I sometimes unintentionally began dragging items, most notably dragging tabs out of my browser instead of just switching to them.

The keyboard, on the other hand, I quite enjoyed. The keys are well spaced and you’ll rarely, if ever, find yourself mistyping. There is more than enough depth when typing and the keys feel solid under your finger despite being made from the same polycarbonate as the rest of the body.

The arrow keys are half-size which can be annoying, but I don’t generally spend too much using them so it didn’t really bother me. The numpad on the right is nice touch and definitely a plus if you’re a number-cruncher. My only real complaint is the lack of back-lighting, however it’s not a necessity and definitely not a deal-breaker.

Using the notebook on daily basis, the biggest issue I had with practicality was the placement of the ports. If this were a desktop replacement, the type of notebook you don’t intend to move around a lot, then it would be fine, but it’s not. It’s supposed an ultrabook, and one of the reasons they’re called that is because they’re ultra-portable. Having the headphone jack is by far the most frustrating of the lot. When plugged in, your headphone cable feeds around the side, and because your head sits in the middle the cables inevitably get pulled on the keyboard.

I tended to feed my headphone cable underneath the keyboard which worked well enough, but there’s not an awful lot of clearance and anything thicker than your average could create a very frustrating wobble. Having the other ports at the back is more of an inconvenience than a frustration and it’s only something that’ll you’ll deal with once, like plugging in a mouse or an external harddrive when you boot up, unless you’re constantly swapping between flash drives or something similar.

The M3 Ultra comes standard with “Professionally Tuned Dolby Home Theater” and it gets the job done for the most part. I did find it a little bit silly though, that the speakers are pretty much on the underside of the notebook. When you’re working on a desk, or a similarly hard, flat surface it’s great because the sound reverberates.

However, when you use the laptop on your lap it’s a different story and often the sound is muffled. I found this especially true when typing in bed, as I am now, with the notebook sitting on top of my duvet. The actual quality sound is pretty good for a laptop though, but the bass is not as deep and full as I’d like it to be, often the case with notebooks.

Then there’s the screen. Although it’s by no means bad, it’s just not up to scratch with its competitors. The glossy, 15-inch 1366 x 768 LCD panel simply doesn’t measure up. The resolution is subpar at best and you’ll often notice hard edges where there should be nothing but silky smoothness. The viewing angles also aren’t great, but they’re only really an issue when more than one person is trying to view something.

Our test machine was the entry-level of the bunch which ships with an Intel Core 1.4GHz i3-2367M processor, 4GB RAM and a 320GB HDD, and while it’s no gaming machine it performed admirably in all other aspects. Programs and applications loaded quickly and ran smoothly. HD content runs without a hitch and it comfortably handled in excess of 10 open tabs while browsing, when the wireless connection was good enough.

The built-in webcam put in a satisfactory performance and is more than adequate for everyday use. Start-up from cold boot took just more than 10 seconds and to wake from sleep was just shy of 2 seconds. The battery life is also pretty decent and I never got less than 5 hours’ worth of use. The notebook runs nice and quietly and heat was only ever mild, if that.

The M3 Ultra is decent notebook, but it’s not a true ultrabook. Sure it’s thin and quick, but it’s not quite as thin or as quick as its ultra-counterparts. That’s not necessarily a bad thing though, it’s a nice 15-inch notebook that comes at a very reasonable price.

It might not appeal to the gaming or graphic design crowd, but for everyday users it’s a capable machine that won’t let you down. It’s ideal for light content consumption and will easily meet the needs of the average consumer who doesn’t need a fully-specced machine.