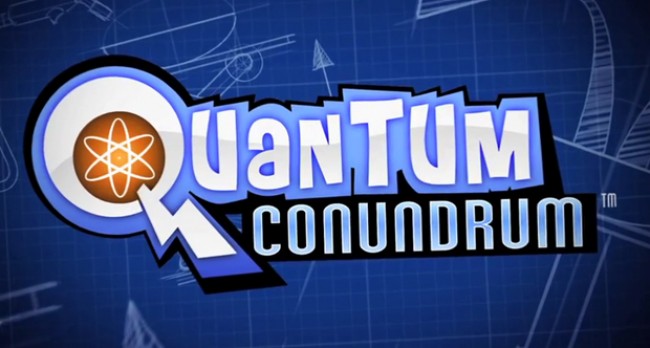 It’s been a frustrating week. Kate and Tom are getting divorced, Prometheus was only so-so, and my car broke down. But none of those experiences even came close to the frustration of playing Quantum Conundrum (QC), and I love Kate and Tom.

It’s not that QC is a bad game, quite the contrary: it’s a good game — ‘good’: that pesky word that wishes it was ‘great’or ‘brilliant’ but lacks punch and syllables. Hell, perhaps QC would even settle for ‘bad’ — surely it’s better to be remembered as terrible rather than just plain old boring ‘good’?

What is most puzzling about this first-person puzzler is that there are some great ideas in it, even brilliant ones. It never pulls them off though because it asks its players time and again to have cat-like reflexes and patience that would rival Ghandi.

Imagine you just bought a 500 piece puzzle from your favourite hobbyist store. Now you love puzzles, there was even that wonderful puzzle made a couple of years ago that was universally loved. This new puzzle is made by one of the same creators, it’s got a playful, quirky charm to its aesthetic and it’s even half the price of regular puzzles — Charlie Sheen, that’s “bi-winning”.

And so you get home, slap the box down onto your table, rip off the plastic, marvel at the ‘map’ — the picture that the puzzle promises to eventually make — and you get to work. It starts off slow, almost a tad boring. Most of the first few pieces you handle look quite similar, with small differences between them. You check the ‘map’ again just to make sure… yes this is right box.

You stick it out though, after all every other puzzle on the market these days is violent, relying on grandeur and glossy puzzle pieces to mask boring experiences. As you make progress there are a couple of nice touches here and there and figuring out how to put this puzzle together is actually quite clever — parts of it require some lateral thinking, and you start to feel like it was all worth it. But then something happens. You’re sure you have the right solution, but two puzzle pieces just won’t fit together, are you wrong? No it must be right, and yet the only way to get the pieces together is to throw one up in the air, jump on your chair, spin three times and catch the piece midair with its counterpart. You shout to the heavens, ‘why does a puzzle need reflex action!?’

Extended metaphors aside, that is the Quantum Conundrum experience. Designed by Kim Swift of Portal fame, and developed by Airtight Games, QC lets the player shift dimensions within a room at the press of a button, changing the properties of objects inside that room.

This is the ‘portal’ of the game: making objects light as a feather in fluffy dimension, or as weighty as lead in heavy dimension. The game really shines with slow-motion and anti-gravity dimensions respectively as objects slow to a crawl or fly up towards the ceiling.

Oftentimes the solution to a room is in the order in which you activate the dimensions. That ‘aha’ moment when you figure out a solution is wonderful, but it’s only half the battle. The other half is pulling off the solution, unfortunately obtuse controls; bizarre physics and awkward platforming stand in your way at every turn. You’ll often reach a point questioning whether you have the right solution — nine times out of ten you do but annoying trial and error is the only way forward.

It’s such a pity that the design team decided to incorporate platforming elements. At its best QC asks you to think laterally, at its worst it asks you to perform reflex and jumping elements that have never been suited to the first-person perspective. If some first-person perspective games cry out for a third-person camera then QC screams for one. The story is a bit of a letdown but can be forgiven; masking complex physics-based puzzles within a cohesive world has always been a bit of a challenge. You play as a small child who has come to visit his Uncle Quadwrangle in his wacky manor. Upon arrival your uncle is nowhere to be seen, yet his voice echoes through the halls in glorious stereo. With his guidance you must navigate room after room of weird experiments — lasers, robots, conveyor belts, boxes and all — to save your uncle from the perilous dimension in which he is stuck.

Visually, the game’s charm wears off after about five minutes. The manor’s corridors and rooms look similar in layout and colour-scheme and the limited lighting effects do little to spice them up. Scattered throughout the mansion are your uncle’s books, with some hilarious titles, but you’ll quickly realise these repeat throughout the entire game. For a downloadable title we can forgive sub par visual quality, but visual repetition is a sin whatever your price bracket.

Lastly there is the omnipotent Uncle Quadwrangle himself, voiced by the masterful John De Lancie who famously played Q on Star Trek. With voice-acting royalty in the house, you would expect, well, something great. And yet your uncle’s quips are rarely laugh-out-loud affairs proving the standard of writing quite poor overall. The lines are delivered with great enunciation and poise, yet even John De Lancie can’t bring more than a distinct voice to mundane dialogue.

And so Quantum Conundrum is that annoying thing, a ‘good’ game, but never a ‘great’ or ‘brilliant’ one, despite having some really great and brilliant ideas. The dimensions are fun, and the puzzles are consistently well thought-out, yet the execution of solving these puzzles will one day become the dictionary definition of frustration.

By all means, for US$15 the game is well worth it, and if Gearburn did ratings this would be a solid 7/10 game. But with talented people like Kim Swift and Q from Star Trek on board it’s puzzling that the end result is merely ‘good’.

Available on PC through Steam