We’re not going to debate the legality of jailbreaking. All we’re going to say is that Team Gear approves the freedom a jailbroken device provides. The jailbreaking app store Cydia is where the magic happens and to further push the “legitimacy” of this content, most of the best apps cost money. You know, like the actual app store. So here are the 10 best and essential Cydia apps as of July 2012. Also, all the apps listed below will work on a jailbroken iPod, iPhone and iPad running iOS 5 or later.

Installous — free, but filled with piracy 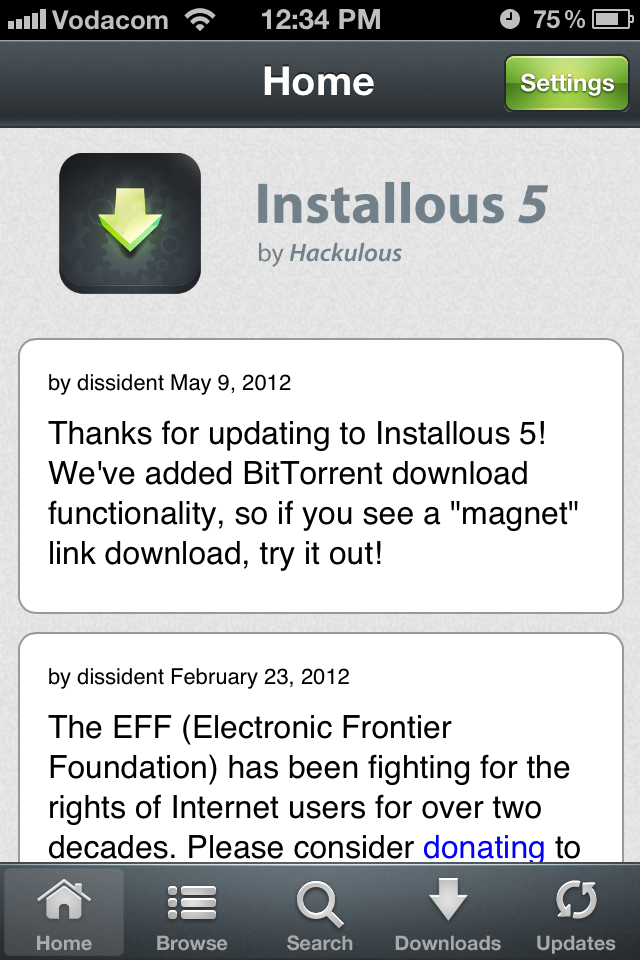 This is a contentious app. Installous, which is the most downloaded app on Cydia is pure piracy. It’s also ironically, a better app store than the official one with the ability to download directly from torrents (Magnet links) and resume, as well as queue, downloads. Apps can be legally purchased, but Installous does not mess around. For those who’ve installed it, we know which side of the piracy fence you fall on. We prefer it clean and legal. 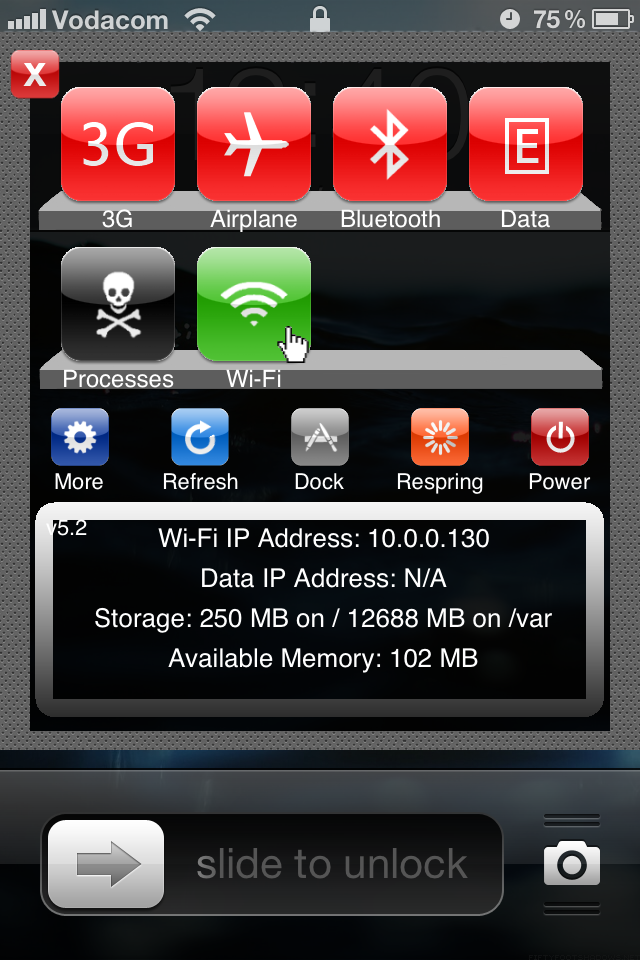 Cool, back to legal apps. SBSettings creates the software and hardware hub the iDevice always wanted, but Apple would never create. Every function of the iDevice can be toggled on or off. Location, brightness, 3G, Bluetooth and Airplane mode are a few toggles the users can access from the lockscreen or homescreen. This is care of double tapping the home button, sliding from the top of the screen or shaking the device, whatever takes your fancy (you’ll need to install Activator first). It’s just so damn useful that without it, the iDevice feels like half of what it could be. SBSettings is accessibility come to life.

There is no access to the iDevice’s file system built natively into iOS. End of story. Not so, says iFile. For US$4.00, iFile seems pricey but is worth every penny. The freedom to explore a device which you bloody purchased is a boon of note. Besides being able to copy and delete files, iFile supports zipped files, IPA installs and more. It’s a must.

For everyone who’s ever tried to download from the native Safari app, we feel your pain. Enter the Safari Download manager. Download as many files as you like, with support for resuming downloads. It’s quick and pain-free to grab files like this, so never suffer again.

Want to create a folder filled with 320 apps? Want to go full Inception and create a folder inside a folder? Go ahead and take a bow, FolderEnhancer. iDevices eventually fill to the brim with apps and FolderEnhancer is the best solution for managed app satisfaction. We love the option for hiding the folder name and customising the folders background colour. Customisation, it’s the hallmark of any great Jailbreak app.

iAP Cracker — more piracy, for free (all it costs is your soul)

More controversy-sparking apps for the price of nothing. iAP Cracker hacks in-app purchases. So if you need more guns, more cars and more levels but aren’t keen on paying a dollar, then iAP cracker will scratch that piracy itch. It’s a cheeky app, but one that goes hand in hand with Installous. It wont work with every app, but it works with most of the bigger titles. Try your luck, save a few bucks. Or pay the price and feel an ounce of satisfaction knowing that you’re supporting a game developer with a tiny cash injection.

This needs to be installed to get the most out of SBSettings. With it, the gesture controls take over the iDevice. Shake to open calculator, swipe to write a message, you get the idea. Activator cuts down on time, which is worth the asking price of nothing in our books. 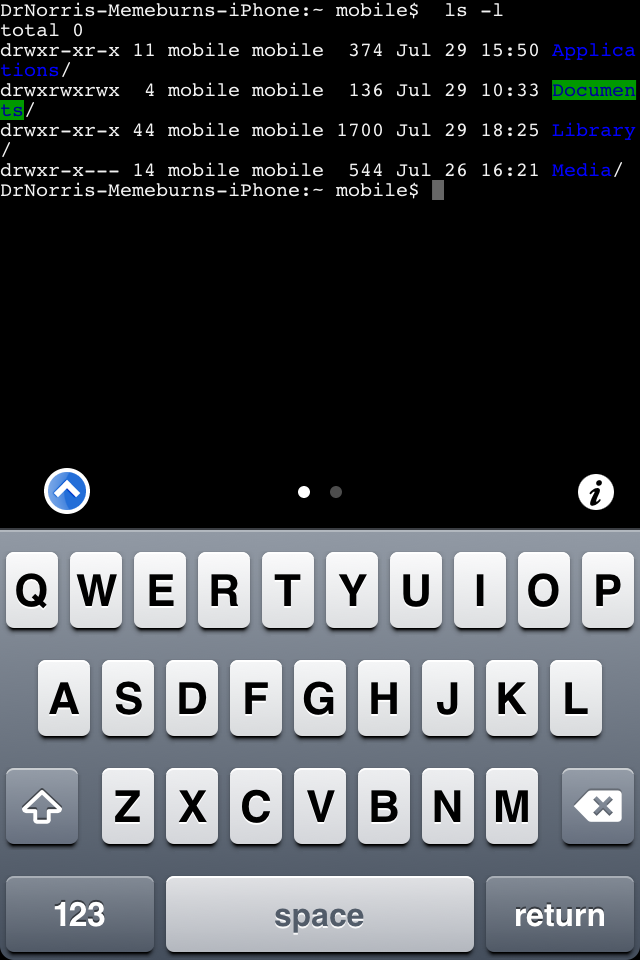 Power is the sweetest of all drugs. MobileTerminal then, is the iDevice’s heroin. From what the Gearburn developers have had to say, MobileTerminal is a 1:1 terminal. Hell, we were two steps away from restarting the hosting server. 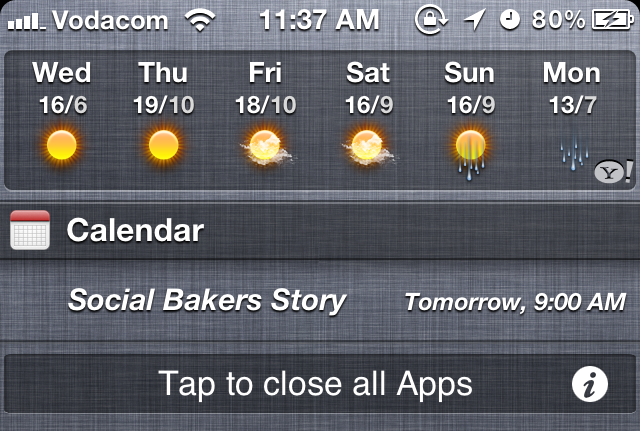 Quick and simple. Once installed, this app, which lives in the notification center, will close all open apps with a single tap.

We’re unsure of why this is the final app on the list. With Infinidock, apps can be added to the dock until your brain or scrolling fingers melts. Drag the app in and its added to an infinitely scrolling dock. Time-saving apps have no equal to this. 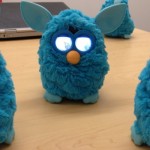