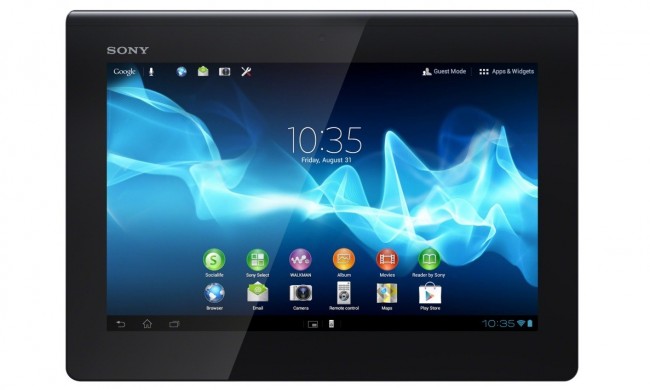 The Sony Xperia Tablet S was announced in Berlin at IFA 2012 and gives the well received Tablet S a welcome refresh, while retaining its iconic folded-book design.

You’ll immediately notice that the new Tablet S is considerably thinner than its predecessor – almost 10mm less at its thickest point – and this goes hand in hand with a 30 gram drop in weight, making the 570g slate very easy to hold, even in one hand.

The aluminium body provides the Xperia Tablet S with a solid build quality, which feels more premium in the hand than a lot of other Android tablets, and makes it a smart looking device.

Before we get right down to it, check out its smart looks in our hands on video demo with the Sony Xperia Tablet S:

With the new iPad oozing five star quality, Sony looks to be trying to emulate that high-end appeal with its latest tablet.

We found that the Xperia Tablet S is still a little top heavy when held in landscape, thanks to that rear bump, but hold the slate in portrait with your hand grasping the fold and it feels very natural in the hand.

There’s not many buttons to choose from on the Xperia Tablet S exterior, in fact there’s just two – a power/lock key and volume rocker switch both located on the right side, in an easy to reach position and we had no trouble when it came to finding and using them.

Round the back you’ll see two speaker grills at the bottom of the Xperia Tablet S, plus two small dots above them, which raise the tablet off a flat surface, giving a better angle for typing on the stock Android keyboard, and allowing the sound to flow out of the speakers.

Inside the Sony Xperia Tablet S packs the impressive Tegra 3 quad-core processor, clocked at 1.4GHz and backed up by 1GB of RAM. There will also be 16GB, 32GB and 64GB varients of the tablets, with availability differing depending on which region you’re in.

That means the Xperia Tablet S has more than enough grunt to run Android 4.0.3 Ice Cream Sandwich, allowing you to slide through the homescreens and app list with ease – resulting in a pleasing user experience.

TechRadar was told by a Sony spokesperson that the Japanese firm is currently exploring the possibility of bringing Android 4.1 Jelly Bean to the Xperia Tablet S – so you’ll need to watch this space to see if it gets the latest flavour from Google, but we reckon it’s a pretty much nailed on certainty.

Sony has added its Xperia user interface design to a tablet for the first time, bringing it in line with its wide range of Xperia smartphones – creating a clear and attractive brand style across all its mobile devices.

Although Sony has tweaked the visual appearance of Android, it’s still pretty much the same, intuitive Ice Cream Sandwich system we all know, with some handy added extras.

One of these extras is Sony’s mini apps, where you can bring up in a small window over the top of any homescreen or application you happen to be running at the time.

You get the choice of a mini web browser, calculator, note pad, music player, voice recorder and timer, with the ability to move them around the screen, launch the full-blown verison of the app or simply close them – all very easy to use and it’s a nice touch which sets Sony’s Android tablet apart from the competition.

Even though the Xperia Tablet S flies through Android’s main screens, the same speed isn’t translated when it comes to other activities.

Firing up the stock Android browser, we found page load times disappointing, with TechRadar taking over 10 seconds to fully load, with the slate struggling to cope with ad banners and moving images.

Sadly the experience doesn’t get a great deal better once the page has loaded, which scrolling, zooming and panning a stuttery affair, making web browsing a bit of a pain and we can see ourselves reaching for a smartphones instead after a while.

Flash support is a slight saving grace, although it won’t feature if the Xperia Tablet S receives a Jelly Bean upgrade, and although it’s also pre-loaded with Google Chrome, the browsing experience is not any better here.

Entertainment is at the heart of most tablets and the Sony Xperia Tablet S offers crisp, clear video playback on its 9.4-inch, 1280 x 800 IPS display, with the pre-installed Movies app offering up a basic, yet easy to use video player, which loads HD videos in a flash, and allows you to “throw” (read: stream) them, along with music and photos, to other DLNA connected devices.

We could easily watch a feature length, HD movie on the Xperia Tablet S without having to worry about picture quality and our arms getting tired, thanks to the reduction in weight.

If you prefer watching media on your home system, Sony has also included an infrared universal remote control application, allowing you to control your TV, cable/satellite box and home entertainment system from the Xperia Tablet S.

The app offers up large, clear buttons on screen which were very easy to use, although it’s unclear how easy it will be to pair with various devices, especially those not carrying the Sony name.

Sony’s Walkman application crops up on the Xperia Tablet S, letting you play all your favourite tunes in an attractive and simple audio player, with album art display and visualiser giving you a great visual experience on top of the decent sound coming out the back – which is further enhanced by Sony’s ClearAudio+ technology.

A graphic equaliser is also present if you wish to fine tune your tracks, plus you can control your music from the notification bar as well as a mini app which you can pop up on top of any screen.

Sony has also included its Music Unlimited and Video Unlimited services on the Xperia Tablet S, giving you access to a wealth of tunes and movies, a service which is offered free for the first 60 days after purchase.

Even though no one buys a tablet for its camera and video recording capabilities Sony has stuck a rear facing, 8MP snapper and front facing 1MP camera on the Xperia Tablet S.

The app isn’t the quickest to load, with a couple of seconds wait before it springs to life on screen – offering up big buttons and simple menu options, of which there are just a few including scene modes, white balance and exposure.

Snap a photo and the shutter takes another couple of seconds to process, meaning you’ll be unable to capture images in quick succession, but the 8x digital zoom is a welcome feature, as is auto- and tap-focus.

Connectivity fans may be a little disappointed to learn that Sony has only garnished the Xperia Tablet S with a full size SD card slot – hidden behind a slightly tricky to remove plastic cover – and a 30-pin dock connector on the base for charging and popping the tablet onto peripherals such as speaker docks.

Bluetooth 3.0 and Wi-FI b/g/n are both present however, and there will be 3G variants of the tablet released, but at the moment they don’t look destined for the UK or US.

If you fear leaving your tablet out in the rain, or near running water, then your mind can be put slightly at ease as the Xperia Tablet S is splashproof, however this won’t save it from a journey into the bath, so we’d advise keeping it away from water just to be safe.

If you fancy getting your hands on Sony’s latest slate, the Xperia Tablet S will be hitting shelves in September this year, although the price is still unknown.

We really like the Sony Xperia Tablet S, and it is certainly going to give the likes of the Samsung Galaxy Tab 2 10.1 a run of its money, although the Retina display on the new iPad may well tempt some away.

As long as Sony manage to keep the price competitive, we can see the Xperia Tablet S being a decent tablet to plump for, we just hope it can sort out the sluggish web browsing before launch and fingers crossed we’ll see the 3G version a some point. 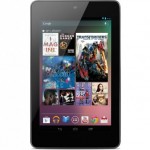