By Steven Norris: grumpy curmudgeon
Read nextHuman powered helicopter: is this a new era in flight? 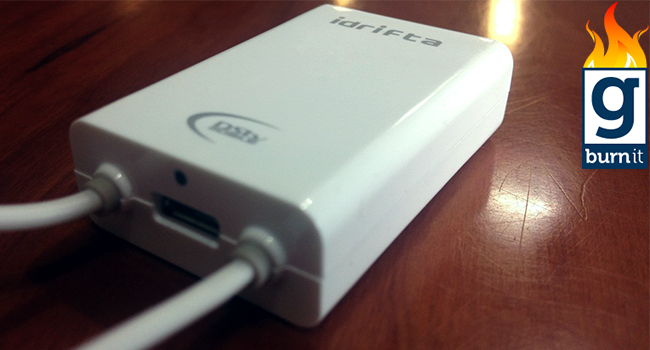 Here’s what I love about technology. Sometimes it’s just too smart for its own damn good. Case in point, the DStv iDrifta. It’s a tiny little mobile satellite decoder streaming DVB-H TV for the fair price of R500 and R50 monthly for 14 channels of DStv goodness. Nice idea in concept, but the blurry DVB-H signal holds it back from greatness. Onto the review.

Good news about the iDrifta. It’s minuscule, no bigger than a box of matches coated in the dreamy shine of an Apple product. Smooth to the touch and reeking of class, the iDrifta causes little to no interference to form factor when plugged into an iPad, but on an iPhone it’s more like a cancerous mole grown out of control. The aerial, or little loop of plastic hanging off the ass of the iDrifta is an irritating but necessary feature. Without an aerial, it’s not going to pickup any signal but with it, the iDrifta looks as cheap as chips. It’s an easy target to ridicule, so let’s keep going. I’ve pulled out the iDrifta way too many times now based on the aerial alone. It hooks into everything, especially fingers and I dread the day it rips in half.

If mobile phones have built-in aerials, how goddamn difficult would it have been to internalise a piece of wire? Come on people. Avoid geek rage. Almost all the Drifta products share the same wrinkle in design, so at least the iDrifta doesn’t walk alone. Still, aerials suck harder than the fan on my aging laptop. This is how crappy it looks in an iPhone. Swag factor is drastically reduced. A little better when docked with the iPad

Battery life is another concern. The iDrifta delivers three and a half hours of TV, takes two hours to charge when empty and for the life of me, won’t charge when connected to an iDevice. Utterly lame. To charge the iDrifta, plug in a micro-USB cable between the aerial and into a computer. It’s not heavy though, and at 20g it’s lighter than a block of chocolate. What does the iDrifta do? Simple, it displays TV on an iDevice. What doesn’t it do though? Display a quality signal. DVB-H, or Digital Video Broadcasting — Handheld is an atrocious streaming technology which compresses any HD or SD signal to hell and back. The resolution is a pitiful 320×240, which is half of a VGA signal. On the iPhone 4S, it’s barely passable. On the new iPad, it’s a total mess. Scenes blur, text is unreadable and sound is muddy. Here’s the rub. On a non-HD iDevice, it looks fine, almost like a TV signal from the nineties. Bump that shit up to Retina Display standards and it all falls apart. DVB-H is a standard invented in 2007, which was coincidentally the launch year of the first iPhone, and that was the last time that crap like this was deemed acceptable.

So no, I’m not going to bend over and take this. There’s no excuse for hanging onto outdated tech. DStv is a huge corporation, spanning Africa and Sub-Saharan Africa. Where’s the advancement of mobile HD signals? I understand that for R50 a month, 1080p content isn’t going to work out. Plus, DVB-H is an advanced radio signal, which is the only way that Satellite TV is going to reach the rural areas. But, and this is a but the size of Adele’s old ass, the iDrifta is made for a very specific market.

The Apple crowd doesn’t mess around. Personally, I’ve upgraded from iPhone 3GS to iPhone 4S and never looked back. The upgrade in visual acuity is exponential. Gadgets such as the iDrifta seem like a relic suited to a time before reason or rhyme. I find it guilty of packaging crappy TV quality into a newish product.

One word: interface. DStv has created a streamlined approach to channel surfing. Channels are listed with previews of upcoming shows, you click, you watch TV. It’s a one-two punch approach to TV and I love it. No more endless, meaningless channel hopping. It’s as clear as day and an interface the iDrifta should be proud of, if it had emotions. The volume, battery life and decoder status run flush on the bottom of the interface. It’s great effort, streamlined into an obscenely honed experience.

Ultimately, the iDrifta is for viewing TV and the quality is shocking. It has one job, and that’s to relay satellite to my handheld device. Sadly, I’ve moved on from sub-VGA signals and because of this, I burn the iDrifta. Call me when DVB-H evolves into something watchable.