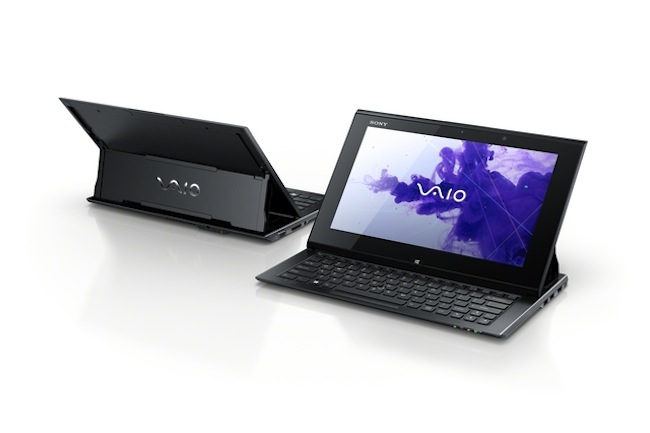 In Berlin today during its IFA 2012 press conference, Sony unveiled a new tablet-cross-laptop device that will go head-to-head with Microsoft’s Surface. It obviously didn’t take Microsoft’s news of the Surface lightly.

It is a tablet device that slides to reveal a keyboard beneath, with a stand to keep it upright. It is slick-looking, like most of Sony’s products, and build quality should be top-notch too. It has an 11.6-inch 1080p screen, which should be enough, though it might still be trailing the new iPad for clarity.

It doesn’t hold back on the internals, either. It will come with a few options of processors from Intel, from the i3 to the i7-3517U topping the range. The RAM will be either 4GB or 8GB, while the internal memory storage comes in the form of a 128GB or a 256GB SSD, while Windows 8 or Windows 8 Pro will be available.

These specifications all sound very UltraBooky, and Sony will no doubt be looking at stealing some customers that would otherwise be buying a skinny laptop. Like a typical Ultrabook, the keyboard doesn’t detach, unlike the Surface, and this will certainly be the determining factor to decide between the two.

As you expect, it comes with an array of ports necessary for all kinds of connectivity. Namely, two USB 3.0’s, an HDMI, VGA out, ethernet, and memory card slot, as well as Bluetooth 4.0. Two cameras top off the package, both being able to record in HD. It weighs in 1.3kg, making it quite the heavyweight. And on top of that, if you go for the extended battery pack, it will really be a hefty fella, especially for its 11.6-inches.

Pricing has yet to be announced, as Sony is most likely waiting on Microsoft to make the first move with the Surface. It will be released alongside Windows 8 in October.