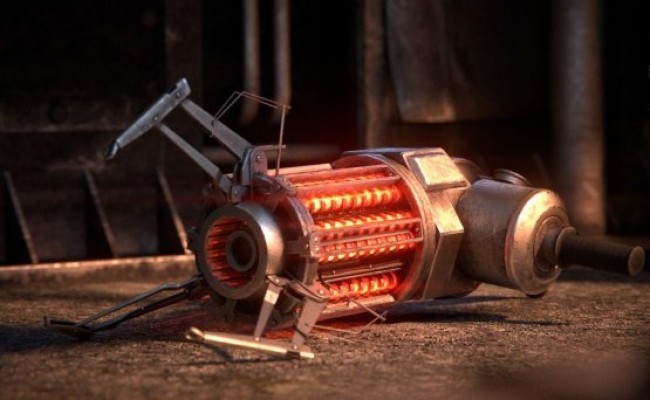 Videogames have long been about shooting dudes in the face. It’s a game mechanic we take for granted. And we all appreciate a good, realistic gun that recoils appropriately — a firearm straight from the pages of Guns and Ammo magazine. Yet sometimes we harbour an itch for something more; a gun both bombastic and outlandish, that forgoes realism for a little fun. Blood: it’s all in the name. Yes, this is a gory first-person shooter, but its best weapon isn’t a gun at all. Like every game of the 90s, Blood’s best weapons come last — and the Voodoo doll is worth the wait. Stab the ragtag toy occupying your right hand and cackle as enemies begin to writhe. Just make sure there are enemies on screen or you’ll inflict damage upon yourself. Priceless. Ironically, unlike Blood, Halo’s best weapon comes first. Behold its pistol, a far cry from the standard pea-shooter that litters lesser games. Right from the offset, Masterchief wields a veritable firearm that sears alien flesh. Quite why the first weapon in the game is so powerful is a mystery. But whether a product of overenthusiastic design or not, we should embrace this wonderful pistol. Or the M6D Personal Defense Weapon as it’s known to the initiated. Nothing in Dark Souls comes without a struggle, but the Furysword is worth the trouble. It looks truly wonderful and emits fire when sliced through the air. Best of all, it’s a lasting testament to the fact you’ve beating one of the game’s hardest bosses. It might not be the best weapon on this list, but such is my love for Dark Souls, I’ve shoehorned it in anyway. Every shooter needs a good shotgun, and few are as meaty as Bulletstorm’s Boneduster. Send foes arcing through the air from the force of this quad-barelled beast. In a game ostensibly centred on killing enemies as skilfully as possible, the Boneduster is wonderful compliment to Bulletstorm’s eccentricities.

Kingpin was a brutal if unspectacular shooter that paled in light to Half-Life. It did, however, have one fantastic weapon to call its own. Boasting realistic flame effects and the ability to turn grizzled punks into screaming children, the flamethrower was a delight to behold — a sadistic joy that, despite the ageing engine, still looks fantastic today.

In Dead Rising 2, you’re plunged into the middle of a mall, its gleaming linoleum floors the entranceway to innumerable shops and gambling spots. Like its forebear, the mall is populated with thousands of zombies. Dead Rising 2 introduces the idea that you can combine weapons — with hilarious effect. And when you decide to bolt a wheelchair to a battery, then affix machine guns to the arm wrests, you’re left with one of the most bombastic methods of exterminating said zombies ever.

The MDK series is criminally unappreciated. Boasting some of the best 3rd person action of the previous decade, it centres on an unwitting janitor thrust into all out intergalactic warfare. Kurt Hectic might spend his days scrubbing floors, but he’s a punisher of alien foes at night. The suit he wears is part Batman, part shark. He can glide through the air using his “ribbon chute” (read: Batman’s cape) while firing a minigun mounted to his forearm. There’s even a sniper rifle somewhere in there. The game is an all-round celebration of slick extermination, and neatly houses it within one very cool spandex suit.

Quake III: Arena is still the daddy of online shooters. Its tight, balanced combat succeeds lagely because of an intelligent arsenal of weapons. The rocket launcher is the best of the lot: not too slow, not too unwieldy and never overpowered. Watching another player reduced to itty bitty chunks of flesh at the hands of the gun is a hoot.

We all know what BFG stands for… and it’s a suitable acronym — big, loud and brash, it’s capable of vaporizing a legion of enemies in a single stroke. While the 3D effects are comically dated today, the idea behind the BFG stands tall: a weapon that, with one shot, kills all before it. The gravity gun is a master stroke. It focuses Half-Life 2’s physics engine into one tight package that turns Gordon Freeman’s environs into playgrounds of death. That concrete block nestling against your feet? It can be picked up and thrown at a combine guard picking you off from afar. Or you might spot a serrated blade embedded in a wall nearby. And then, suddenly, a zombie shambles into view. The results need to be experienced first-hand.

[All images are respective of the various official websites]