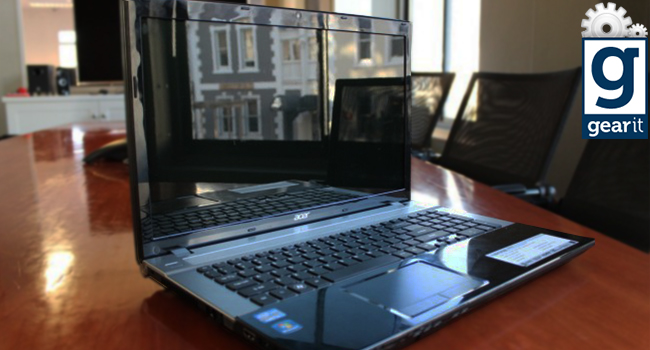 Acer’s V3 is a well-priced, decent-performing desktop replacement goes against the current trend towards smaller, thinner more mobile laptops. What it sacrifices in portability though, it makes up for in screen real estate, an expansive keyboard and computing power.

The Acer Aspire V3 is as much a laptop as a boerboel is a lap-dog, however that should come as no surprise as it’s a fully fledged desktop replacement, not an ultrabook. Unfortunately, it also shares the boerboel’s aesthetic charms, unless of course you consider that particular breed to be the Mona Lisa of canines.

It’s not that the V3 is outright ugly — it just seems outdated, by about a generation. The gloss black casing, which is a powerful fingerprint magnet, would be more at home on a desk from about a decade ago. The machine is made primarily of plastic and is entirely clad in the aforementioned gloss black casing, leave for the metallic silver, top two-thirds of the laptop which comprise the keyboard, which is slightly sunk, and the main speaker grill. It has a fairly solid build, however that is compromised by the lid which has more flex than I’d like. Even just opening the lid, which is a relatively gentle process, I felt it flex under my hands. Once it’s open and the machine’s running, it’s soon forgotten. The lightweight materials do have some benefits, the V3 weighs in at just 3.2kg, which for a 17.3” laptop (41.4cm x 27.4cm x 3.5cm) is very manageable. Unfortunately, the gloss finish lets it down in this department too — holding it in your hands, with the lid closed, it soon starts to feel as if it’s slowly slipping from your grip. Still, the relatively light weight means it’s about as portable as a desktop replacement can be, but we wouldn’t recommend lugging it around for an entire day as the trip from home to the office should provide more than enough of a workout. One area that the V3 excels in is its abundance of well-positioned ports. The left side houses, from the back to the front respectively, an Ethernet connect, a VGA input, an HDMI input and two USB 3.0 ports. The front of the machine is almost completely free of inputs and ports, except for the five-in-one card reader, which sits on the left side. The right side features DVD reader/burner, two USB 2.0 ports and a mic and a headphone jack. The ports are well-placed and we were never left wanting additional inputs. The only real issue I faced was the proximity of the USB ports to one another, particularly when using chunky devices, like most standard USB modems — when inserted it doesn’t really leave much space for any other USB devices on that particular side. Also, Blu-Ray support would’ve been a nice touch, but its absence helps to keep the price low.

The V3 is very user-friendly and I had very few problems with its hardware. The on/off button, which sits in the top-left corner, has a satisfactory click when pushed down and its blue light glows brightly when the power’s on.

The expansive keyboard, which includes a num pad, was comfortable to use and the keys have good depth and travel making for a pleasant typing experience. Occasionally I found the second-bottom row of keys to be slightly unresponsive, but that might just have been a problem with the review unit, or the position of my hands while working. The trackpad is nice and big and is slightly matte, which improves scrolling. I particularly enjoyed the dedicated, physical buttons that so many new laptops lack, often at the cost of usability. Their addition might not be as attractive as their smooth, button-free counterparts, but there’s something to be said for the comfort and familiarity of physical buttons. There’s also a thin, slightly raised strip on the right side for dedicated scrolling.

Multi-touch gestures weren’t great though — multi-finger scrolling and pinch-and-zoom was average, but flicking between and rotating images was frustrating more than anything else. However, considering it’s a desktop replacement it’s a safe bet that users will use it with a mouse.

The palm rest provides plenty of space and working on the V3 was always comfortable, regardless of how long I was busy. Again, I had a slight issue with the gloss finish which also covers the palm rest and almost always caused my palms and wrists to get slightly sweaty.

The V3 is a desktop replacement, and its features are optimised to that end. You probably won’t be using it on your lap very often and the screen has noticeable glare in bright light (like sunlight), but in terms of its intended use, replacing your desktop PC, it’s a pleasure to use.

On paper the V3 looks rather impressive, and it didn’t disappoint in real-world tests. Here’s a quick peak at the spec list of the V3-771, which sits more or less in the middle of the series:

Probably its most immediately noticeable feature, the 17.3”, screen is a beaut. The native resolution is 1600 x 900 and colours and contrast are crisp and clear. The reflective coating serves its purpose well, but in bright lighting it actually works too well and ends up reflecting more of the surrounding environment than what’s actually on the screen. Again though, for a laptop that you’ll primarily be using indoors it won’t really be an issue, unless you’re sitting directly in front of a window. All things considered, it’s a pretty nice screen which makes watching video content a pleasure.

Storage space is ample, however with most contemporary user’s seemingly insatiable lust for data most people will probably employ an external device as well. The i5 processor and 4GB of memory performed admirably and handled day-to-day tasks without a hitch, quickly launching and opening most applications and programs. I also managed to do some light photoshopping without any problems and watching HD footage was a treat. In terms of performance the only real let down, if it can be called that, was the lack of a discrete graphics card (which is present in the higher end models). Even so though, light gaming ran smoothly and graphics intensive games and programs did alright at lower settings. It’s no gaming machine though and serious gamers should look elsewhere.

The 1.3M HD webcam goes up to a maximum resolution of 1280 x 1024, which is less impressive than it might sound. It does well as far as webcams go, and I doubt it’ll disappoint when comes to most, everyday functions and the same goes for the built-in microphone.

The speakers also held their own and only really suffered when turned up to the max. The sound reproduction is as good as can be expected from laptop speakers, it’s quite crisp and clear but, as is the case with most laptop’s speakers, slightly tinny and lacking decent bass.

Battery life is stated to be four hours, however I seldom found it last that long. During heavy content consumption — watching videos, listening to music and gaming — battery life was very poor, and I usually got a warning that capacity was at less 10% after about an hour and fifteen minutes. Start-up time isn’t bad for desktop replacement, coming in just shy of 20 seconds and wake from sleep never took more than three seconds.

The Aspire V3 is a very capable desktop replacement and has an attractive price tag to boot (under R10k). Resource intensive users might be slightly disappointed, but that’s only really when you’re working, or gaming, at the higher end of the spectrum which this particular model was not necessarily intended for.

It’s a great laptop for standard business or home users, ideal for both content creation and consumption, as long as you’re never too far from a power outlet for an extended period of time.