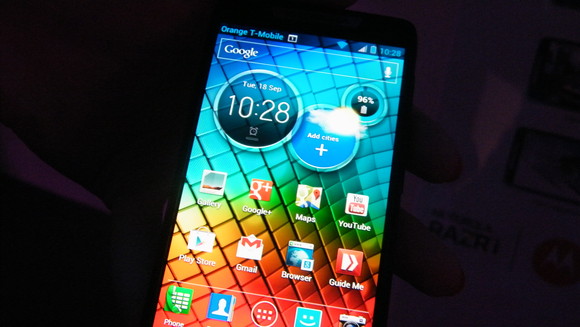 The Motorola Razr i is the latest smartphone from the now Google-owned firm, and this mid-range handset promises edge-to-edge action in the palm of your hand.

While things have been pretty quite on the Motorola front since the launch of the Razr last year – with just a smattering of mediocre handsets since – the Razr i is the most important European phone of the year for the company, so expect to see it filling TV ad space and adorning the side of buses soon.

The Motorola Razr i release date is currently pegged for October, but prices are yet to be confirmed, although as this is a mid-range handset we’d expect it to arrive at around the £300 mark SIM-free, comparable with the likes of the HTC One S and Sony Xperia S.

As with the Droid Razr M which was announced earlier this month, the Razr i shares the same industrial design as its American twin, with the sturdy, wedge-shaped aluminium frame and Kevlar back providing a solid handset which feels like it can withstand multiple knocks and bumps.

There are three rivets down each side of the Razr i, adding to that industrial feel, and while it may not be to everyone’s taste, it isn’t a bad looking phone and it sat nicely in our hand, with an even weight distribution welcome after the rather top-heavy Razr.

The 4.3-inch Super AMOLED Advance display is crisp and clear, although it’s not a pin-sharp as the iPhone 4S or Xperia S, thanks to the 540×960 resolution – but the trump card for the Razr i is the lack of bezel, as Motorola has offered up an edge-to-edge screen, with only minimal padding above and below.

Thanks to the sleek and slender 122.5 x 60.9 x 8.3 mm dimensions of the Motorola Razr i, it feels like you’re holding a huge screen, and one that’s, as Motorola happily pointed out in its press conference, 15 percent larger than the iPhone 5.

It’s the first Motorola handset to sport Intel inside, with the Razr i packing a 2GHz single-core processor – the first time a phone has packed such a powerful single-core chip.

This is backed up by 1GB of RAM, which power Android 4.0.4 Ice Cream Sandwich. We’re informed that Motorola will be upgrading the Razr i toJelly Bean soon, although no date has been confirmed.

Motorola and Intel made a big deal about the quality of the processor inside the Razr i and to be fair, they’re certainly entitled to, as the handset takes the Android operating system in its stride, allowing you to zip through homescreens and the app tray without any hint of slow down.

Head over to the internet and the Motorola Razr i really starts to show off, allowing you to load up mobile web pages in just a couple of seconds. TechRadar.com, for instance, took just four seconds to load in a usable form, and then just another couple of seconds to finish off the moving banners.

Pinch to zoom is pretty smooth and while perhaps not quite a slick as theGalaxy S3 – but remember that’s a quad-core handset – it’s an impressive showing with the Razr i able to keep up with rendering text and images.

Unfortunately there’s no text-reflow, which is frustrating when you zoom in to read text, as you need to scroll sideways as well as down, something which the majority of handsets offer so we wonder why it’s not on the Razr i.

Another impressive feature is the 8MP rear camera, and thanks to the Intel chip the app opens up in under a second. Seriously, press the icon or click the physical shutter button on the right of the Razr i and pow, you’re into the camera and ready to shoot.

Auto and tap-to-focus are both present, and the Razr i takes just a second or two to snap an image and return you to shooting mode, ready for the next.

If that’s not quick enough for you, Motorola has also included a burst mode which takes 10 images in under a second, allowing you to capture the perfect star jump.

There’s a few options to play with in the camera app, but it’s not as well tooled as some of its rivals, with basic exposure, scenes and effects controls, plus an option to use the LED flash on the back and switch between single, burst and HDR modes.

Interestingly the Razr i seems to lack a panorama mode, something which was built into Ice Cream Sandwich, but Motorola has omitted from the handset.

The rear camera is capable of capturing 1080p, full HD video, while a front facing, 0.3MP VGA quality snapper can record at 720p.

Something else we found pleasing was the relatively pure Ice Cream Sandwich software which had been installed on the phone, with Motorola shunning its previously over-the-top and clunkly skin in favour of a simpler, and in our opinion better, Android experience.

That’s not so say Motorola has delivered the vanilla version of the OS, with it’s own “Circles” widget adorning the homescreen, showing you the clock, weather and battery life in three handy spheres – receive a message or email and a notification will be displayed in the largest circle, allowing you to easily see who’s trying to contact you.

Of course you can easily ditch this widget it if doesn’t take your fancy, but we enjoyed playing with the intuitive system and the way you can flip the circles over with a flick of the finger is a sure-fire time waster in our book.

Drag down the notification bar from the top of the screen and some of you may be disappointed to see that there’s no quick settings for the likes of Wi-Fi and Bluetooth, but fear not as Motorola has addressed this in a slightly different way.

Head back to the homescreen, slide from left to right and instead of cycling to the last homescreen in the run (you can have up to sever on the Razr i), or even not going anywhere, you’re greeted with the aforementioned quick settings.

While all the big hitters such as Wi-Fi, GPS, Bluetooth and Mobile Data all feature, it’s a tad annoying that a NFC toggle hasn’t made the list, especially as the Motorola Razr i sports the wireless technology, including Android Beam – allowing you to touch two Android, NFC-enabled handsets to share content easily.

The Razr i ships with the stock Android keyboard, which while perfectly functional as a day to day input device, for those of you who will be churning out the words it still feels a little cramped, even on the 4.3-inch display.

We may well have been spoiled by phones with bigger screens, and those of you who pick up the Razr i after using an iPhone may find it suitably big, but we’d still opt for a third party option from Google Play.

For those of you who love gorging yourselves with media on your smartphone then you may be a little disappointed to learn the Razr i only comes with 8GB of internal storage, however there is a microSD card port on the left side of the handset, under a flap alongside the microSIM slot, allowing you to expand your options.

Video playback on the Motorola Razr I was impressive in the demo clips we watched at the launch event, and while the screen might not be a bright as some if its rivals, playback is smooth and colours strong making for a pleasant viewing experience.

As well as the touted performance, Intel also claims its processor manages power more efficiently than its dual-cored rivals, meaning the 2,000mAh battery housed inside the Motorola Razr i should easily see you through a day of relatively heavy usage – although we’ll put that to the test during our in-depth review process.

Motorola has confirmed that the Razr i will be stocked by T-Mobile, Orange, Virgin Media, Tesco Mobile and Phones4U in the UK, and it is currently in talks with other carriers – so we wouldn’t be surprised if it showed up at O2, Three and Vodafone too.

The Motorola Razr i is looking like a quality mid-range phone with impressive performance, intuitive user interface, a handful nice additional features and a hardy design – this is a phone we can get excited about.

If Intel’s claim that its processor can provide decent battery life as well as top-notch performance rings true, and networks agree a suitably competitive price with Motorola, the Razr i could well be on to a winner.

We’ve already got a unit in for review, so make sure you keep an eye out for our in-depth Motorola Razr i review, which will be on the site soon. 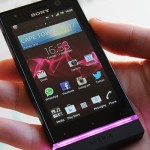