Damn, two events in one day. First Nokia, now Motorola. Today the Google-owned company held its launch at Gotham Hall in New York. Let’s get down to business.

Eric Schmidt, who is a fantastic speaker and had us rapt in his intro, welcomed us to the show. Speakers yammered. Then Rick Osterloh appeared and introduced us to the new line of Razrs, which all come standard with Android Jelly Bean.

It rocks a 4.7-inch display, and it’s edge to edge baby. Moto says 75% more pixels, we’re still unsure of its PPI. But there is a dual core CPU, which when mixed with the US’ Verizon network, delivers a blazing-fast Chrome experience. Moto says this makes the web “super fast”. A Chrome demo was attempted, but it wouldn’t play nice with the phone.

Battery life is a huge draw and Moto has upped the game here. The 2500mAh battery promises 16 hours of talk time, which is pretty goddamn nuts. The screen has 40% more area than an iPhone 4S. It seems immense. This is the compact phone of the Razer family. There’s an 8MP camera, 8GB internal memory and 1GB RAM. A 2000mAh battery powers it. And hell, it’s only US$99 and will be in US stores from today. Best of all, older Moto owners get US$100 credit towards a new device. Party on. One note, Motorola seemed to have major penis envy, caused by the iPhone 4S. It kept comparing its products to Apples. This added a desperate subtext to an otherwise mediocre product launch. Read the full press release here, or spent an evening watching the leagues better Nokia event. 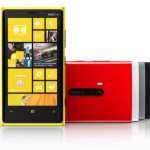