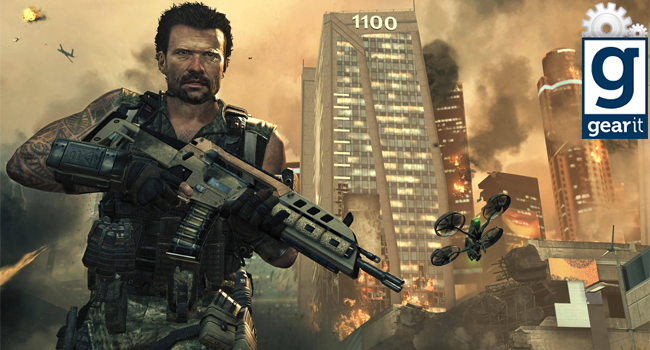 Call of Duty: Black Ops II is not the revelation we’ve been waiting for, but it makes bold new changes to a very stale formula, including mission goals that affect the overall game, real-time strategy levels, customisable loadouts before each mission and the slickest multiplayer of 2012. Lock and load. Alex Mason is dead/missing in action/whatever and his son, David is the new star of the story. Kind of. What the trillions of adverts, pop-ups, McDonalds Happy meals and Black Ops II underwear sets did not let on is that a fair portion of the game is spent in Mason senior’s shoes. From the 80s to 2025, the story crisscrosses between father and son and ends at an extremely satisfying conclusion. There are multiple endings to Black Ops II depending on the choices you make throughout the game, and each one is memorable. Yes, story choices are the same “press A to execute or B to save” method we’ve seen before, but it’s handled with aplomb.

The missions, now with a modicum of choice thanks to the new RTS-lite Strike Force missions (more on this later) are varied and heart-pounding. It must be said though, that Black Ops II has the most quicktime (QTE) events and moments of hand-holding in any Call of Duty title, ever. And I can see why this was done. Black Ops II single-player isn’t a game, it’s a Hollywood spectacle which has already generated more money than an actual big-budget studio film. This tutorial stage is super-frantic and a great set-piece for the “larger” maps
Spectacles must be tightly directed and this is seen in every inch of the single-player missions. Falling down a cliff and rappelling with super-sticky gloves is dandy, but there’s only one path to follow. Watching a helicopter blow up and spin dizzyingly over your convey is intense, but there’s little input from your side. At least it looks incredible.

Strike while the iron is hot

The graphics engine is pushed into unforeseeable territories. There’s not a single lazy texture or poorly animated soldier, just HD textures and natural movement. Black Ops II is all tight corridors and dirty warzones, with a rock-solid 60Fps keeping the action in check. That doesn’t stop the game from directing us towards sweeping vistas that at least provide the illusion of space. Sometimes though, but not often, Black Ops II opens up and gives us a branching map to explore. Near the end of the game, there’s an assault on a private island that caps off with a breathless fight in a non-linear outdoor garden. For the first time in COD‘s history, I actually navigated a level on my own stead. This idea bleeds into Strike Force missions which while innovative and exciting, are far too easy. These drones are simply the worst
Strike Force missions are an excellent, and optional, addition to the COD formula. This is the COD we know and love, but with a pleasant real-time strategy twist. Over the course of ten minutes, as most Strike Force missions are timed, the player must coordinate attacks and take out targets, rescue hostages or setup satellite uplinks. Controls are ideal, with a pull of the left trigger sending off troops to attack and the left analogue stick used in lieu of a mouse. You may wonder, ‘is it at all playable?’ and the answer is yes, yes it is. Strike Force missions can be played top-down like a traditional RTS or if you feel like “cheating”, you can inhabit the body of any solider or machine for direct control. I say cheating because, and perhaps this is the flaw of Strike Missions, taking direct control of a solider turns the missions into a cakewalk. Even on the hardest difficulty setting I would rarely die on these missions. So two flaws: too easy, and too few missions to contend with. Perhaps Activision will release Strike Force map packs addressing these issues? Here’s hoping.

Black Ops II is a decent continuation of the COD multiplayer formula, with little in the way of innovation. It’s a good then, that the multiplayer in COD was already the best of its generation. Instead of lamenting the buttery smooth controls and incredible netcode, let’s highlight the best new updates to Black Ops II multiplayer. Possibly Photoshopped? There’s rarely teamwork in Call of Duty.
Firstly, money has been replaced by the now popular tokens. Instead of earning arbitrary money, we now get one or two tokens per level gained. This lets us easily pick and mix weapon loudouts.

Next, there’s a new set of multiplayer modes which are so engaging and bro-tastic, that it boggles the mind as to its past absence. It’s called Party Mode and it’s a bucket of bloody fun. Modes include Gun Game, One in the Chamber, Sharpshooter, and Sticks and Stones. Of all the modes, Gun Game is the best, and most frustrating of them all. Every kill earns an upgrade to the current weapon. You start with a crappy gun, and work your way up to a sniper rifle or best of all, rail gun. That’s just the beginning of the fun. With well over 50 multiplayer modes, league championships and more, there’s literally months of online killing to accomplish. You can at least call in drones to even the odds
This is all on top of the thousand-plus multiplayer only achievements, leveling up guns and customizing almost everything with the new “pick 10” setup, which lets users choose ten of any gadget/weapon combination. It’s not about being locked into weapons because of class or level anymore, it’s about killing with what you know, and love. While single-player a decent 7-hour thrill-ride, multiplayer is the meat on the bone that will satisfy shooter fans until the inevitable Black Ops III.

What of the humble zombie, overused in both film and video games? Black Ops II brings back the zombies back with Tranzit, a survival game with a story tacked on for good, but mostly bad, measure. Over the course of the missions, players hold back the zombie horde and explore each level for objects needed to advance. Zombie killing is excellent fun, hog-tying an adventure game to it, is not.

Tranzit is a failure then. The game never, not ever tells you what to pickup, or hints at what objects you need to advance. It’s all trial and error, very much like the adventure games of old. At least Monkey Island was funny and entertaining. Why should I be forced to use a walkthrough? This is case of, “People, let’s just copy Left 4 Dead but remove the humour, charm and objectives.” The head, always aim for the head
There is a straight-up survival mode though that can be selected before the start of any level. This then is the best way to play Zombie mode on Black Ops II. Our recommendation: play Tranzit mode once, then never again. And remember, it’s always more fun split-screen with friends than it is online. Zombie is the sort of game that needs swearing, shouting and possibly drinking to really enjoy.

Call of Duty: Black Ops II comes highly recommended. It’s an actual, innovative COD and this alone makes it worthy of purchase. It’s difficult to get on the negative bandwagon and pick apart Black Ops II, so I won’t. If you love shooters, you’ll die for this. If you don’t, Black Ops II will turn you into a fan.

Call of Duty: Black Ops II reviewed on an Xbox 360 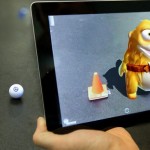