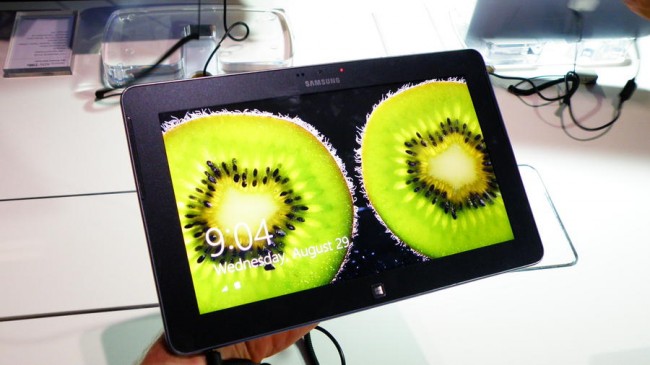 Samsung launched a raft of new tablets at IFA 2012, with the Ativ Tab being the most tablet-esque.

Shorn of the keyboard of its Ativ Smart PC brethren, the Ativ Tab is a pure tablet running Windows RT – and it’s certainly got the design credentials you’d look for in something like this.

The 10.1-inch HD screen is impressive, and certainly adds a level of crispness to proceedings that others might not manage, which really helps when looking at the IE browser installed or scrolling through the reams of apps on the (now not so-called) Metro interface.

The design is impressive – it’s not metallic, which does detract somewhat, but coming in at just over half a kilo in weight and less than 9mm in thickness, we can’t say we’re disappointed too much.

There’s the dedicated Windows button at the bottom of the screen for flicking back and forth between the most recently used app – but it’s very much just standard Windows RT flavouring from there.

For the first time Windows 8 user, this will be a confusing experience, with the navigation proving hard to fathom without the notion of a pervasive back key.

One of the main strengths of the Samsung Ativ Tab is the fact it’s so well-connected… and we don’t mean it can get you to the front of the queue at McDonalds without a fuss.

It’s the ability to hook up printers and the like, connect USB keys, HDMI leads and chuck in microSD cards to expand the onboard storage – plus the onboard NFC to boot.

The dual core chip inside is perfectly good at powering things along, it seems, with very little in the way of slowdown. However, despite being connected to the same WiFi network the speed of internet connection certainly wasn’t in the same league as the Galaxy Note 2.

We’re still not sure on the point of cameras on tablets, especially at the rear. The 5MP effort on here is still a good option, and we especially liked the fact you could take a picture by tapping anywhere on the screen, rather than a shutter button that makes you drop the blasted tablet.

However, in a nod to the old Windows heritage underneath, there was still a moment before we opened the camera where we had to confirm we were cool with the app using the camera sensor and the microphone. Surprisingly, it’s not something we were worried about.

There’s another cool feature that pervades throughout the Samsung Ativ Tab: the search functionality. Simply swipe in from the left-hand side of the tablet and you’ll get access to the Bing Search window. It’s a handy touch and one that should be used frequently when trying to get info from within the tab or the wider world.

There’s also the notion of no physical keyboard, and while the onboard option is good, it’s a little wide for our tastes, meaning we were forced to press the letters with the tablet laid down in front of us.

Beyond that though, the Ativ Tab is a solid little device that’s going to be perfect for students and those that just want a powerful yet portable tablet. With little problems on the UI front, and the likes of inbuilt Microsoft Office coming off the bat, it’s well-stocked.

And that’s before we get to the media and gaming properties; the fact the screen is so crisp works wonders when watching movies, and the size and weight distribution making it a very useful option for checking out the latest flicks.

We do have an issue with the way Microsoft forces you to go through the Videos Store to get to your own files… we don’t generally want to buy anything there. Xbox games wasn’t stocked when we played with the Ativ Tab, so we can’t comment on the gaming prowess, but if it’s anything like that found on Windows Phone then we’ll have no problem with it at all.

Of course, while it all depends on price, the Samsung Ativ Tab is a decent device. It’s got sleek lines, a long-lasting 8200mAh battery and a quality screen.

It’s whether the new line of Windows RT tablets will be seen as real contenders to the iPad when consumers are choosing their slate – while it’s clear these aren’t straight up rivals, nobody’s going to buy two tablets.

But overall, we like the Samsung Ativ Tab… here’s hoping it’s the start of something special between Samsung and Microsoft.