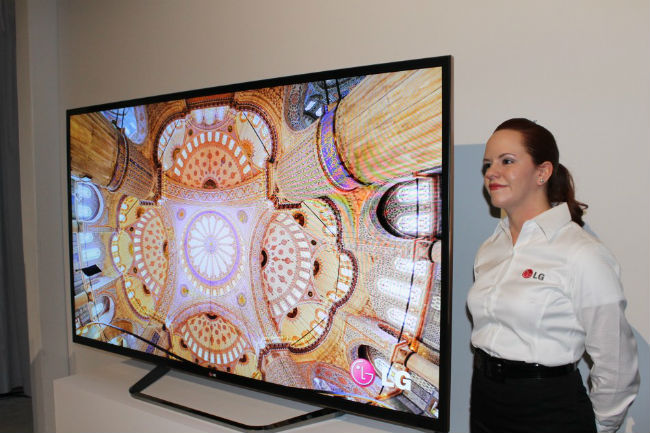 There was one thing predominantly clear at CES 2013. Actually it’s two things: 3D TV is dead/dying, and enormous living-room-dominating Ultra HD and OLED TVs are the next big thing. Ultra HD, also termed 4K, has been on everybody’s lips with the three main competitors Samsung, Sony and LG displaying TV sets that almost defy logic, and making the oft-used phrase “world’s first” into a cliché. And believe it or not, an 8K TV snuck in there too… First up is LG with the stars of its show, a 55-inch curved OLED (Organic Light Emitting Diode) TV, and an 84-inch Ultra HD. What puts LG a step ahead is that both these sets have begun shipping already, with the 84-inch on sale already in 40 countries around the world at a price of around US$20 000. For a cheaper option, two new 55 and 65-inch models are in development. Samsung displayed some OLED TV’s as well, but managed to induce wide-eye glares with its 85-inch Ultra HD TV, and it’s, wait for it… working on 95 and 110-inch versions. Samsung clearly are the kings in the big-bigger-biggest category, and their display area certainly showed this. The immense TV’s are mounted on frames and can be tilted for a better viewing angle with a 120 watt surround sound system built into the frames. It will be some time though before these behemoths are ready for shipment, as Samsung says that it’s still about five years before mainstream Ultra HD is ready. Sony sort of came in through the back door, quietly displaying its selection of Ultra HD offerings to CES with the 84-inch Ultra-HD set it already launched in November 2012. For a mere US$25 000, Sony offered to throw in a tablet and computer server that has 10 movies preloaded. But on the more “affordable” side, the Japanese tech giant unveiled a 55-inch and 65-inch Ultra-HD set that should go on sale later in the year for under US$10 000. Sharp for the most part had a display not much different from the norm. That is if you just walked by and peeked in. But inside it presented something… BIG. The world’s first 8K TV. Or is that Ultra-Ultra HD? With a display 16 times that of a regular HDTV (7680 x 4320 resolution), it is Sharp’s way of showing what it intends for the future. A future that is probably about 50 years away. According to Business Insider, the 85-inch TV “was a beauty” with an “incredible level of incredibly detailed, high-quality images.” But this was just a proof-of-concept display as the technology for producing anything to actually show on a TV like this is still in the distant future.