Hewlett-Packard (HP) has just stifled the rumours by releasing the HP Pavilion 14 Chromebook, its first Chrome OS laptop. Is it big news? Yeah well sort of… it could be… it should be… if it were not for a joke of a battery.

According to the Google Chrome Blog, the only real change from what is already available in the Samsung, Acer, and Lenovo Chromebooks, is the larger screen, sporting a LED-backlit 14-inch 1366 x 768 panel in what most would call a traditional laptop package. With 16GB of built-in flash storage, 2GB of RAM and a 1.1GHz Intel Celeron 847 CPU it should chug along merrily though. Keeping within the laptop form, there is also three USB 2.0 sockets, an SD card slot, HDMI output and even an Ethernet jack that you don’t find on the other Chromebooks. Selling at US$329.99 from today, users also get 100GB of online Google Drive storage space for the first two years.

It does top its other competitors in all honesty, with the larger screen being a welcome sight. Unfortunately there is a downside. Yes the battery. A small four cell that will get you no more than about four and a half hours of unplugged time. Which then does not really make it a laptop anymore does it? As with most other laptops over the years, it generally becomes a very compact desktop. 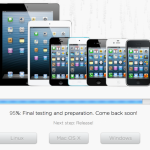