By Steven Norris: grumpy curmudgeon
Read nextSamsung: we’re working on a smartwatch too you guys! 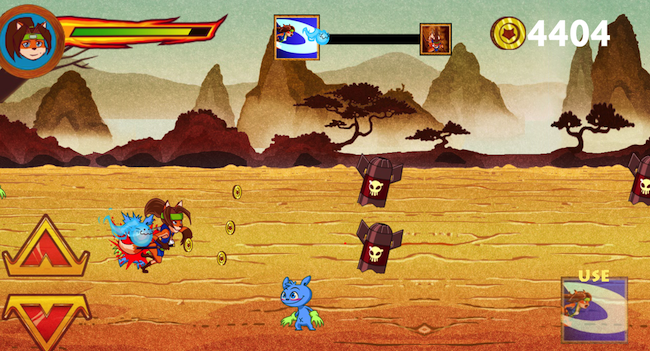 Maybe I should change the title to “7 games worth playing”, as there’s a fortune of rubbish titles on BlackBerry World. The seven games below though are the pick of the crop. Sadly, none of these are Z10 exclusive titles, with most of them being upscaled Android games. Regardless, the Z10 is an excellent gaming machine, with an ultra-responsive screen and a rather powerful CPU capable of smoothly running most titles. On that note, here’s 7 of the best for your Z10.

No one seems to have Asami on Youtube. Spooky.

This run-forever game is enticing and confusing. Enticing in that the graphics and gameplay are solid as a brick, confusing in that the game starts out practically broken. The general theme is to run, slice (automatically) into colorful foes and get enough coins to upgrade speed, luck, money multipliers and so on. So, broken but in a lovable way. There are two controls: up and down to dodge plus a “specials” button that activates a three-tiered power system.  The controls, and the game, only improves as the user upgrades Asami. What is initially slow and frustrating becomes a fast-paced score rush. For an unknown game, it’s a winner.

I’d label this as a “flagship” game. BBB is fun, it’s simply a blast to play. Yeah, it’s a rip-off of Mario Kart but what isn’t? Combined with excellent controls for a touchscreen and we have a tasty racer with last-gen console graphics. Which is still decent for a mobile OS. Select a kart, purchase (with real money) upgrades and race for thrills. It’s the insane level of attention that has been poured into BBB which sets it apart from the rest, as cliched as that sounds. For the price of nothing, it’s worth a few games.

Tetris is yummy, and the very definition of snack-sized gaming. Here is  game that everyone knows and happily plays very well on touchscreen devices. It’s the Tetris we know and love, with a twist. There are a few added gaming modes but nothing to really rock the boat. What really sets this Tetris apart is the new touch-based control method. Swipe to drop the blocks. Tap to rotate. Works like a bloody dream. Tetris for the Z10 is worth every penny.

This is how difficult it can get

There’s a metric ton of real-time strategy and tower defense titles for the Z10 and most of them are awful. Radiant Defense is one of the exceptions, plus it happens to be free. Here’s the deal: you need to add cannons, laser towers, mines, nuclear bombs, walls and various other defenses in an effort to push back iPhone launch-length lines of alien foes. Seriously, on the hardest difficulty levels the alien menace spams your base for up to five minutes as you feebly try to protect your precious home. Strategy is key, and on the higher levels defeat is all but inevitable. But Radiant Defense just looks so lush and is very playable. Overall an excellent title to download and one that takes the 4.2-inch screen of the Z10 into full account.

Every mobile phone owner should have Angry Birds Star Wars on their device. Just, because. It’s hard not to be an Angry Birds fan when Rovio keeps releasing slick games like this. While I pretty much hate Angry Birds, the fusion of this and Star Wars hits me right in my geek heart. There are hundreds of levels, everything is Star Wars-themed and the controls have been untouched. Cute additions like power-ups for each bird and nods to Star Wars across every facet of the game only help to epitomize this as the very best Angry Birds game on any platform.

I should talk about LG2 more, because it’s amazing. Oddly, I despise golf but I adore LG2. It’s got a cool, unique look to it and plays very well. There’s well over 108 holes to play on, and a nifty online mode. I won’t go as far to call LG2 realistic, but it sticks lightly to the rules of golf (from what I understand) without letting realism become a hindrance. And it’s one of “those” games. A game that can be played in short bursts, or for hours at a time. The control, touch to swing, is as good as it gets and the various locations add much-needed variety to a tired genre.

I don’t think Sonic has ever looked as good on any other mobile device. The Z10 excels with Sonic 4, a straight port of the Xbox Live hit. It’s amazing to see an Xbox game shrunk onto the Z10. Not only that, Sonic 4 is fast. There’s little slowdown, just classic Sonic action in high-def. Sonic 4 is also one of the best Sonic’s to hit a device in decades. It’s as if Sega has stripped out the crap only to replace it with sweet, juicy gameplay. Sonic 4 screams “download me”, and you should.