SXSW has skyrocketed from its original 150 attendees in 1987 to the world-class event it is today. This year’s event has featured some impressive speakers: the Foo Fighters’ Dave Grohl gave the music keynote speech, Shaquille O’Neal talked technology and Newark, N.J., mayor-slash-heartthrob Cory Booker discussed Twitter.

But for you gadget-guru types, the highlight remains SXSW Interactive, headquarters for new ideas and creative technologies. See if one of these devices will satisfy your technological appetite in 2013:

You’ve probably already heard about Google Glass, but do you know anything about the customized Web-connected sneakers that were on display? Google believes consumers will want shoes that act as a personal trainer. The sneaker features an accelerometer, a gyroscope and a pressure center linked to a smartphone app and speaker. The shoes also give you some attitude if you aren’t quite cutting it; one of many snarky responses in its arsenal includes, “Are you a statue? Let’s do this already!”

Unfortunately, this shoe isn’t going on sale, but it’s certainly captured a ton of attention. Google was also promoting its more conventional devices, like the Google Nexus 4 with Android Jelly Bean 4.2 baked in. This is one of the new Google-endorsed phones that’s definitely leveling the playing field.

The same technology you find in Nintendo’s Wii and Microsoft’s Xbox Kinect is slowly migrating its way toward mainstream technology. The Leap Motion Controller connects to a computer and checks the movement in your fingers when they are placed over the sensor. However, it’s far more sensitive to fine motor movement than either Wii or the Xbox Kinect, making it potentially the new way people control their laptop or desktop PCs. Interestingly, the platform is remaining open to developers, so many innovative uses for this technology may come about in the future.

3D scanning has officially been invented. The Digitizer scans objects up to six inches wide by eight inches tall. These objects can then be turned into digital blueprints, or you can use a 3D printer to print them. You set the object onto a rotating tray, and then the Digitizer uses two lasers and a webcam to scan the object. If you’re dreaming about getting your hands on this product, you won’t have to wait long. Makerbot anticipates releasing this product for purchase to the general public this fall, and while it hasn’t declared an official price, it’s expected to stay within a relatively affordable range for mass consumer use.

How many times have you’ve wanted to take a picture, but the situation in front of you unfolded faster than you could pull out your smartphone? The Memoto Lifelogger is a minuscule device that straps covertly to your shirt collar or sleeve (or just about anywhere else you want to clip it) and takes pictures constantly, at a rate of about 2 per minute, and stores them to a microUSB flash drive. When you upload the pictures to your PC, they’re automatically synced to Memeto’s cloud. If the device senses too much darkness — say, you place it in your pocket — it automatically stops taking pictures. In case you’re wondering, at a picture rate of two per minute, the device’s battery still lasts several days before requiring a charge.

3D television isn’t even mainstream yet, and it’s already available for your iPhone for US$33.95. This handy accessory displays videos and games in three different layers, creating a stunning visual effect. It also works in coordination with Palm Top Theater, which allows you to browse and purchase short movies and games, and Palm Top Studio, which lets you create content directly on your mobile device. If you use Adobe After Effects, you can also make your own videos for use with Palm Top Theater. Most of the content on Palm Top Theater is free, and the content you pay for is affordable, costing no more than $2.

Work-from-home employees can now feel more like part of the team. Beam is a large robotic device operated by a remote user. With two HD cameras located above the display, Beam gives a full body image of an individual, while also allowing them to explore the physical space accessible to the device. You control Beam much like the PC games of yesteryear — using the arrow keys. Beam allows you to “walk around” a remote office and have virtual conversations face-to-face with coworkers. The idea is to increase the connection remote workers feel with their employer. Suitable Technologies, manufacturer of the device, employs many remote workers, which inspired the creation of Beam.

In terms of the “cool” factor, OpenPool rocks the joint. It’s difficult to explain what this gadget does at a theoretical level, so take a look at an example. At SXSW, the setup used two Xbox Kinect sensors, a projector and a pool table. The Kinect Sensors checked around for motion, while the projector displayed a school of fish on a pool table. The school of fish acted like real schools of fish — swimming about when no motion was present. But, when a pool ball would roll in the direction of the fish, the fish scattered. The technology is being kept totally free. From a practical perspective, imagine what a high-end bar, nightclub, restaurant, or even the private citizen could do to entertain guests. 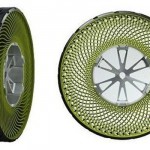