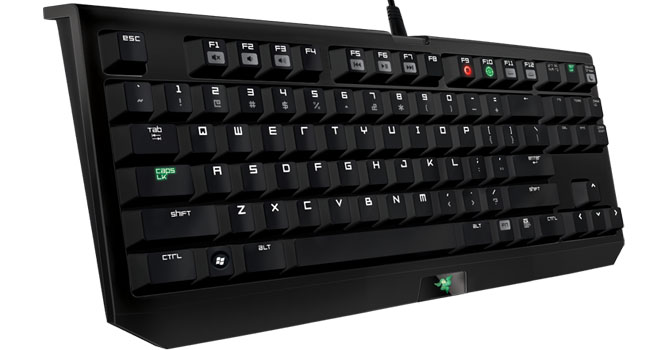 A quick note before we get started: This review is concerned solely with the Tournament Edition, the entry-level offering in the Black Widow range. It retails at US$80.

Aesthetically the Black Widow’s jet black exterior is modern. But start playing around with the keyboard and you’ll be reminded of all things ‘90s. This pleasurably retro sound is likely caused by each key being individually mapped to its own switch: a system called mechanical keys.

The Black Widow: Tournament Edition features a full set of mechanical keys, technology Razer is keen to talk up, and with good reason. The innovation ensures you need only produce the smallest amount of downward pressure for the key to recognise your input.

This makes gaming an instinctive experience and it transforms the art of writing a word document into a pleasurable  task.  As you get used to the keys responding to your fingers at every turn, you might take the responsive keys for granted — but return to an “ordinary” keyboard and the difference is noticeable.

In terms of construction, the Black Widow feels very well made and you get the impression that, even at the mercy of the untidiest owner, the keyboard will survive cool-drink spillage, stray chip dust and all manner of dirt and grime. It’s likely to get dirty too because the Black Widow is designed to be lugged from one dirty LAN party to the next.

It derives its portability from its small frame and lightweight design. The Black Widow is several inches shorter than ordinary keyboards and weighs less than a kilogram. The space and weight gain has not come without a cost: dare I say it Excel user, this keyboard ships without a number pad. Still, gamers are unlikely to perturbed and will discover that it’s easy to use and even easier to move. The mechanical keys mean you’re less likely to miss a keypress in the heat of battle and the keyboard’s lightweight construction lends it a plug-and-play accessibility.

I also sense writers will love the Black Widow because the mechanical keys are tailored to people who want to play with words. The absence of a number pad isn’t a problem here either because writers spend time glued to Word, not Excel, and the Black Widow is so small it’ll fit even the most cluttered desk without a problem.

Elsewhere the Black Widow has the hallmark Razer flourishes. Certain keys illuminate, like the caps lock, which is useful in dim lighting; the keyboard inputs are fully customizable courtesy of Razer’s proprietary software found at its website, www.razerzone.com and even when you’re mashing several keys at once, the Black Widow keeps pace thanks to “anti-ghosting” (meaning the keyboard won’t lose track of your inputs).

Excising the number pad turns out to be a master stroke and gives the Tournament Edition a niche to call its own. As a gaming keyboard it’s more or less faultless and as I’ve stressed above, its mechanical keys are perfect for writers too.

If there is a flaw it’s a purely cosmetic one. The lettering used for each individual key is horrible and looks as if it’s been ripped from a low-budget Sci-Fi flick. But other than this minor aesthetic quibble, I can’t fault it.

The Razer Black Widow: Tournament Edition is the most basic model in the series but it has the advantage of being the smallest and lightest too. It’s tailored to high-precision gaming but the mechanical keys turn it into an excellent keyboard for intensive writing tasks too.

At US$80 it’s an inexpensive peripheral that loses nothing to its more expensive siblings – and the clickety-clack of the keys will scratch the itch of anyone wishing to return to a noise rooted in retro.

Verdict: Small and lightweight – the Tournament Edition is the entry-level model in the Black Widow series, but the only one you need.