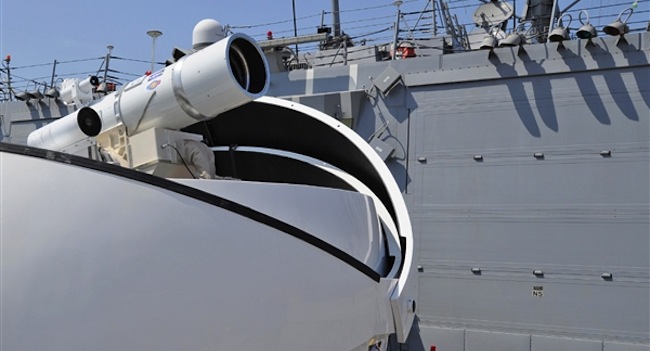 From 2014, the US Navy plans to deploy a ship-mounted (and plane-mounted as seen in the video), US$32-million laser cannon called the “Laser Weapon System” or LaWS for short. The video below demonstrates the frightening, and very real LaWS in action as it burns a freaking drone plane down from the sky. It’s quite something to see.

The video also demos a plane-mounted laser, which is as portable as it is scary. Imagine the military having this much precision and power at it’s fingertips? If you thought nukes were an issue, a portable laser weapon is even worse. But LaWS can only down drones at the moment, it’s not powerful enough for it’s intended use – that is to intercept airborne missiles.

The chief of Naval research Rear Admiral Matthew Klunder said that LaWS will be deployed and outfitted on boats positioned in the Persian Gulf. According to the Klunder, Iran has been “harassing US ships with drones and small, fast boats. This is an intensive maritime region of the world. Lots of commerce, lots of ships.” It’s a fiscally acceptable weapon to boot. It’s US$1 per sustained laser round, and The Register compares this to the US$1.4-million interceptor missiles which mostly perform the same function as LaWS.

LaWS has been tested a dozen times and each time the unmanned target was decimated. For those situations where a laser-induced fiery death is not acceptable, LaWS has a nonfatal mode that blinds the target. LaWS is ready for deployment, with the Navy saying that it wants to incorporate this sci-fi weaponry with it’s ships “right now”. The first ship to get LaWS will be the USS Ponce, described as a “mobile sea fort”. The Navy’s aiming for a 2014 LaWS installation.

The US Congress has high hopes for LaWS as well, say that “[it’s] comparable to the advent of shipboard missiles in the 1950s.” Laser systems like this though include a grocery list of issues, such as weapon effectiveness being nerfed by clouds. Yes, clouds and dire weather affect the line of sight lasers require. Without this clear line of sight, the laser could end up destroying a Hawaii-bound cruise liner off the coast of LA, for instance. 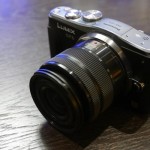