There was the Note. Then the Note 2. But has Samsung finally pushed things too far with the 6.3-inch Galaxy Mega, or is it the ultimate fusion of tablet and smartphone?

The Galaxy Mega might not have a price yet, but it’s certainly not going to be jostling with the Galaxy S4 at her sharp end of the smartphone market. Packing a 1.7GHz dual core processor and 1.5GB of RAM, it’s not slouch in the performance department, but it’s a far cry from the power and force of the S4 or even last year’s S3.

So who is it aimed at, this gargantuan effort at a smartphone? Samsung tells us that it’s the ‘perfect device of students’, which means it dispenses with the need for a phone and a tablet. The subtext there is affordability, and there’s no doubt the Galaxy Mega is going to be closer to the mid-range market. 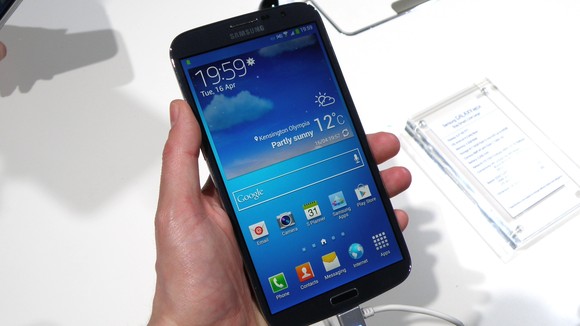 That said, and perhaps it’s an acceptance of the likes of the Galaxy Note 2, but that whopping screen didn’t feel too bad in the hand at all. It’s huge, that’s for certain, and no matter what, you’re going to feel stupid holding it to your ear.

But given we said the same thing about the Note 2 last year (and has since gone on to be one of the world’s top-selling phones) there’s clearly an appetite for a phone that is great for the Internet and video with the ability to make calls too. 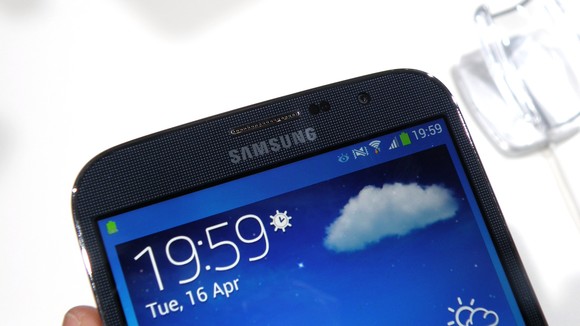 The Samsung Galaxy Mega does have a surprisingly clear and sharp screen for a phone / tablet that isn’t full HD nor uses Samsung’s proprietary Super AMOLED technology either, opting for an HD PLS LCD effort instead.

We were therefore expecting low colour reproduction and a slightly jagged experience, but even at the larger screen size we were really impressed when it came to video and Internet use, with everything appearing clear and sharp.

Holding the phone to do these things was less of a joy, as you can imagine – it wasn’t too heavy in the hand when using with only a single palm, but try to do anything like send a text message and you have to do so using one hand to brace yourself before knocking out a missive.

The messaging system is much more accurate than found on the likes of the Samsung Galaxy S3, which has a simply woeful keyboard. We can still see any user installing a new option ASAP, but what was on offer wasn’t bad.

It’s clear to see that the Galaxy Mega is a phone that’s the first to feed off the design ethos of the Galaxy S4, with the more robust feel to the chassis and a more metallic rim around the edge. 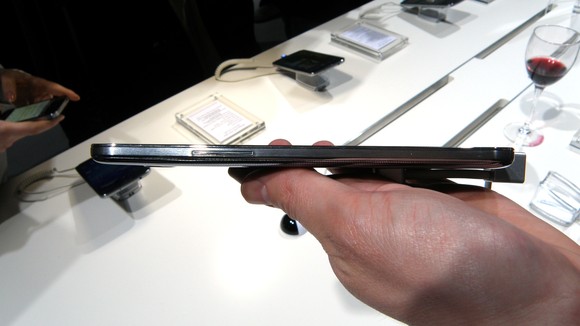 Like so many Galaxy products, the Mega is as light as can be – you’ll struggle to believe that something this large can weigh so little and still actually work. It’s only got up to 16GB of onboard storage, but this can be supplemented using the microSD slot hidden under the flimsy polycarbonate cover.

There’s also an impressive 3200mAh battery, which should power the massive screen for a full day and still leave you a good slug of juice should you forget to charge up during the night. We couldn’t test the battery power due to the fact it was locked to a charger in our hands on time, but we’ve got high hopes for this one.

The Samsung Galaxy Mega comes with a similar feature to the Galaxy S4 in the shape of a high power touchscreen than allows you to use gloves with the device, and also gives you Air View. This function allows you to hover a finger over things like photo albums or calendar entries to see more of what’s hidden beneath without having to actually open it. 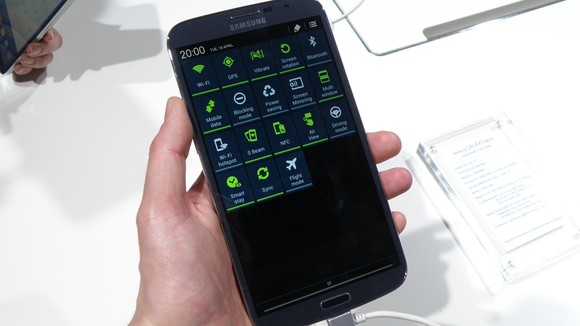 Taking more features from the Samsung Galaxy S4, the camera mode has been upgraded to include drama shot (to let you put loads of frames into one still) and Eraser mode, sponsored by Schwarzenegger (WE JOKE, it’s a film reference). 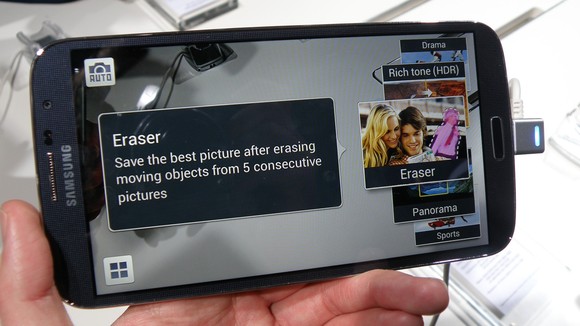 We tried the latter at the event, and we have to say it was really impressive – more so than on our early tests with the S4, which means Samsung is probably managing to perfect the technology. 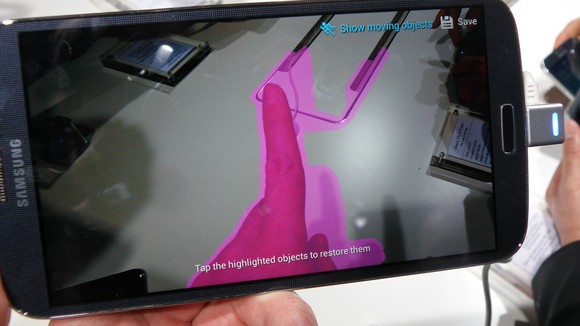 There was one big problem during our experience, and that was with the overall running of the device. You’d have thought that a phone / tablet with a 1.7GHz processor and 1.5GB fo RAM could have handled anything you threw at it, but twice we had a forced reboot situation.

This was when we were trying to use the device for its more taxing purposes, such as multi-screen or Eraser shot, and was a bit of a worry. 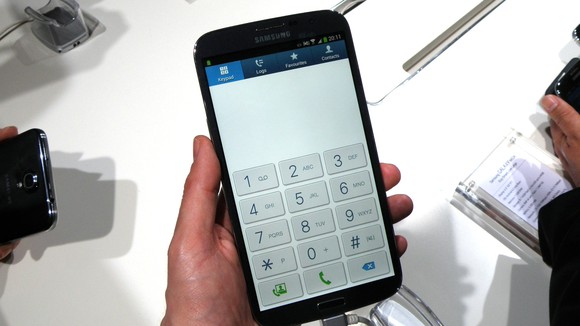 You always allow for elements like this to occur when testing devices on a stand, as the software is never fully ready for proper review. However, perhaps it’s an indication of where we’ve got to these days, but it was still surprising to see it happening on a device from Samsung, which is usually rock solid in this area. 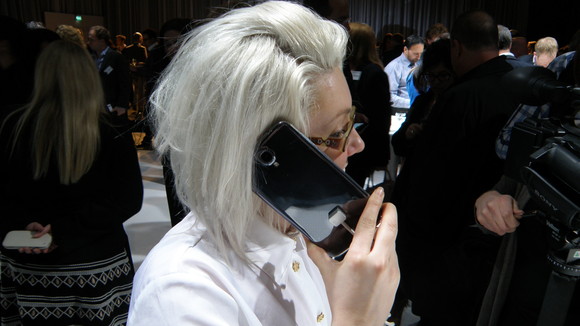 However, like most brands, we’ll give it the benefit of the doubt until the final review sample is made available.

Samsung has done something odd to the world – it’s made the phone and tablet combination acceptable. We should have been almost disgusted at the size of this phone, but unlike the Asus FonePad it doesn’t seem irrational to hold it in your hand.

It brings the sharpness of much higher-res screen and doesn’t feel overly cumbersome in your hand, which is impressive.

We’re a little worried by the lag that was present in our early tests, but given few Samsung phones show this in final software, we’re sure it will be sorted.

The presence of the advanced camera modes is a boon, as is the improved power of the touchscreen to mimic its more powerful brother.

We can’t really understand why Samsung hasn’t made this a more powerful device – but it makes us hanker for what it’s going to do with the Galaxy Note 3. 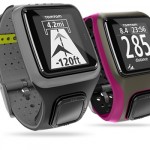