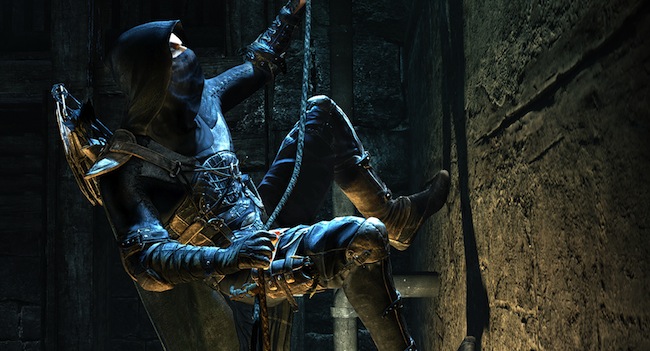 It all begins with Garrett, the beloved protagonist and anti-hero of the original Thief trilogy. In deciding to reboot the franchise, the first question Eidos Montreal tackled was this: would Garrett return or not? How to reinvent a character loved by so many old-timers while simultaneously modernising him for a new generation of players? Was Eidos prepared to enter into a pact with a legion of gamers who still fondly remember the good old days? It seems it was, because Eidos decided Garrett would indeed return, and in doing so, signalled its intention to create the first full-fledged Thief game in nearly ten years.

In a sense, the new-look Garrett speaks for the larger project at hand. With his new hood, gear and strange green eye, he’s a character informed by the lineage of the series, but with a twist — Thief is much the same. While unequivocally a game about sticking to the shadows and sneaking up on unsuspecting victims, Eidos Montreal is not making a direct sequel. Instead, the team is working on a re-imagined world. There’s a new story, a new setting and, most strikingly, a new engine. The company has clearly gained a great deal of confidence from 2011’s Human Revolution, which rustled life back into the Deus Ex franchise. And though the team working on Thief is composed of different members, we have every confidence they will handle a reboot of the Thief series with the same care.

Out with the old, in with the new

Much of the early work has gone into perfecting Garrett’s look. Eidos has settled on something that, in part, is inspired by Brandon Lee in The Crow. Along with a make-over comes a host of abilities that keeps Garrett apace with contemporary gaming icons. Take the “Claw”, Thief’s answer to Dishonored’s “Warp”. Then there’s his “Focus” ability, which sounds awfully similar to Batman Arkham Asylum’s Detective Mode. “Focus” lets Garrett spot useful items within the world, but Eurogamer reports that it can’t be used endlessly. We do know, courtesy of Destructoid, that there will be a “navigation beacon”. Destructoid also mentions a “lockpicking mini-game”, which will prove tense if enemies are roaming about nearby.

Rumour has it that Eidos is spending a great deal of time working out how much of a helping hand to give you during the game. Fans of the old series will remember Thief to be uncompromisingly tough, as all games of the late nineties were. But do the developers risk alienating a new breed of gamer by sticking to this mantra? It appears they’ve looked to pare back the difficulty. Speaking to Game Informer, producer Stephane Roy has said that the new-generation Thief will appeal to the expectations of new-generation gamers by lending them a helping hand in certain situations. If you’re spotted, for instance, Roy doesn’t expect you to reload an earlier save and replay the section to perfection. Instead, he’s overseeing a game where you’ll be given the chance to flee, bide your time, then tackle another route through the level. It sounds good in principle — we only hope the enemy AI isn’t compromised for the sake of a player’s ego.

Elsewhere, the team has decided to keep Thief a first-person game because the viewpoint naturally immerses you within the world. Except, cleverly, they’ve employed a system in which the camera snaps back to third-person when Garrett is using the Claw and performing the proverbial “takedown”. It’s a neat marriage of the two viewpoints – Deus Ex: Human Revolution, in fact, did the same.

An engine to make your eyes bleed

On visual evidence alone, Eidos is doing a fantastic job of bringing a new Thief game to life. Screenshots indicate a world brimming with moody, gothic touches. It runs off a modified version of Epic’s Unreal 3 engine, though it’s clearly heavily modified. Shadows are cast dynamically within the world, which spells a dizzying array of possibilities in a world where… well, you’re tasked with sticking to those shadows.

2012 saw somewhat of a resurgence for the stealth genre, with games like Dishonored and Far Cry 3 as much about moving unseen as going Rambo. It’s perhaps inevitable then that a new Thief is in the works. But the pedigree of Eidos Montreal gives us every reason to believe that, come 2014, this will be a fitting re-imagining of the series.

Set for a 2014 release on the PC and next-gen consoles, Thief’s early screenshots promise a world that captures the tone of the old series, while introducing visual splendour far removed from its ageing forebears. Stay tuned to Gearburn for further coverage as Thief slowly creeps into life. 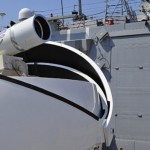