Oculus Rift, the supposed answer to virtual reality is will cost US$300 and make it into the hands of the public next year, says Rift CEO Brendan Iribe in an interview with Edge. Consoles though, are not the primary destination of Oculus Rift, with Iribe saying that next-gen mobile phones and PC’s are “his team’s focus”. Next year is a shaky release date but as Iribe explains “we haven’t set a date yet.”

Consumer release-wise we haven’t set a date yet – it’s not going to be this year but we would love it to be next year – we want it to be right. We don’t want to announce any dates because frankly we just don’t know when it’s going to be really ready for the consumer market where everything is tied together – you have the form factor, HD, motion blur eliminated… so we don’t know how long that will take, but it’s close – we have internal prototypes which have a lot of each thing solved and it’s such a magical experience when you see it all together.

I love consoles but internally we’re a lot more excited about where mobile’s going to go, and being able to plug it right into a next-gen cellphone. It’s the innovation, and how fast cellphones are now improving – where we’ll be with the next Galaxy or the next iPhone compared to where consoles are. Those things are almost doubling every year, compared to a console that’s just stuck it out for eight years – it just makes us very excited. There’s a lot of improvements that can be made on the hardware side for VR that no-one’s doing yet because it’s a new thing. The mobile rate of innovation is going to be able to make a lot of those improvements.

Iribe doesn’t even seem worried about the competition and outright welcomes it, saying that any competing VR products will rapidly speed up the VR medium. There’s even a chance that Oculus Rift will “spark emotions” as according to Iribe, the low-latency of Rift flips a switch in the brain that almost mimics our movements in reality. In 2014, we’ll find out for certain. 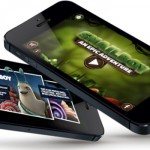