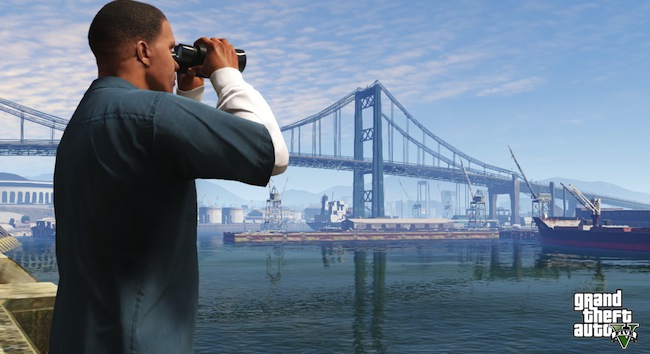 Come 17 September, no one is going to turn up for work. Employees will phone in to complain about strange illnesses. Doctor’s notes will be promised, but never proffered. Offices will entertain only a smattering of employees — the odd doddering secretary and the boss himself too of course — because anyone with a pulse will call in sick that day. Why? It’s the day Grand Theft Auto V arrives, of course.

Released Tuesday, a new gameplay trailer for Rockstar’s magnum opus illustrates, in startlingly clarity, the sheer breadth and scope of this upcoming crime caper. The video reveal is composed of breathtaking aerial shots, snippets of the story and… actual gameplay! Having watched it, and subsequently re-watched it, I’m in no doubt Grand Theft Auto V will be Rockstar’s finest game to date and perhaps the best game to grace the Xbox 360 and Playstation 3. And with that to look forward to, why wouldn’t you call in sick?

The best part happens 1:14 into the trailer

Thanks to the five-minute trailer, we finally have a taste of what it’s like to saunter towards a high-end fashion retailer in the shoes of Michael. We find Trevor at home behind the wheel of the car, fleeing a five-star wanted rating. We get to see Franklin patrolling the ghetto and squaring up to slack-jawed gangsters he can’t help but look down upon. Franklin’s milieu is all grey brick tiling and graffiti-ridden environs and it recalls the early sections of San Andreas — only here it is presented in crisp high-definition.

GTA V falls within the same “high-definition” universe as its predecessor, the Liberty City-bound GTA IV, but that’s largely where the similarities end. Nico Bellic’s adventure was often sombre in tone and relied on a palette of muted colours. GTA V dances with colour and bright lights, and the sights and sounds are as diverse as the city that inspires it. The trailer treats us to its rural mountainous areas, the inky blackness of subaquatic life and the bustling city centre itself. This is a game crammed with things to see and do – teeming with nonessential asides and mini-games to pursue. We get to see a golf game in full swing and later, a brief look at a tennis match. There’s competitive cycling and the chance to customise your cars, outfits and a collection of tattoos. You can even take risks on stock options and buy property. Fittingly in a game all about making money, there are no shortages of ways to spend it.

The crux of the game is, of course, the allure of the almighty dollar. Michael, Franklin and Trevor are in it together to get rich, and they do this by performing heists of increasing risk (and reward). The trailer shows us the trio in a meeting together at a pseudo-base camp where they proceed to plan a heist. As the player you can decide whether to take a stealthy and smart approach or go it brazen and dumb. The choice is yours. Like never before, GTA V gives you the freedom to play the game the way you want to.

Indeed, freedom of choice informs the core game design. Missions can be played a variety of ways depending on the viewpoint you choose. You might opt to take goons out from afar using Franklin’s sniper rifle, or take a hands-on approach with the rugged Michael. Don’t forget Trevor either, who looks like he’ll be the man behind the wheel of the car (or helicopter, or plane) during the heists.

I was initially unhappy about the idea of taking on three separate characters. I didn’t like the fact that these men would go about their lives without you, as if you were a mere spectator and nothing else. But if this trailer demonstrates anything it’s that Grand Theft Auto V is the natural evolution of the series, and soon to be an inevitable benchmark for all sandbox games that follow it. Indeed, even the act of switching between the trio appears to be utterly instantaneous. It’s almost inconceivable that it’s running on archaic console tech. But perhaps it’s the world that excites me most. Rockstar has always been good at building an immersive city, yet it seems intent on broadening and diversifying the landscape, in turn, rewriting what is technically and artistically possible in an open-world adventure. You’re not merely cruising the streets in a souped-up car. You’re also hunting the wildlife and searching for shipwrecked delights.

If there was a criticism leveled at GTA IV it was that it failed to ever give you a meaningful reason to explore the city outside of the main story. Liberty City was tethered to the narrative; it serviced the plot at every turn. Sure you could meet up with girlfriends and get drunk, but once these simple charms wore off, you would always follow the blinking arrow to the next mission.

GTA V stands in stark contrast. Until we play it, we can’t judge just how good it is, but if this new, immaculate trailer is anything to go by, Grand Theft Auto V will rightly inspire a worldwide pandemic of couch-itis come release day.

Just don’t forget to ring your boss up. 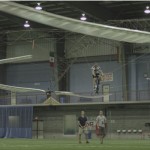