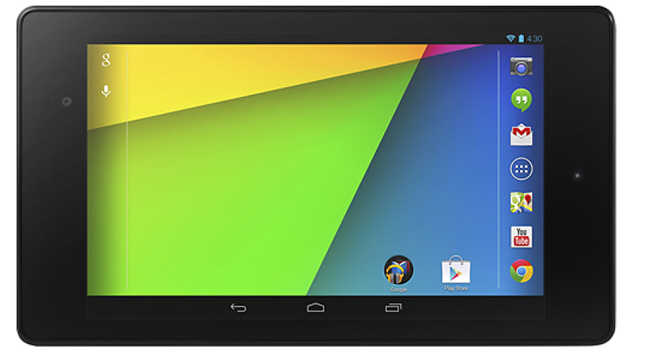 The screen is an absolute corker. At 1920×1020 “true 1080p”, we’re looking at once of the best displays ever packed into a 7-inch tablet. As for the PPI, it’s an insane 321 pixels-per-inch. HD content is going to be as slick as the OS that’s packed into the Nexus 7, namely Android 4.3. The name “Nexus” is scrawled horizontally onto the back of the new Nexus 7, so for all intended purposes, Google wants us to use the device in landscape mode. That’s cool with us, portrait mode are for smartphones, not fancy-ass tablets.

It’s hard not to gush with specs like these, but let’s restrain ourselves for the moment and quietly list off the guts of the new Nexus 7. Inside is a quad-core 1.5Ghz CPU with an Adreno 320 GPU, the same graphics chip as the positively unstoppable LG Optimus G. Paired with this is 2GB RAM and a choice of 16 or 32GB internal memory, depending on how much you’re willing to pay for the thing. Google demonstrated some fantastic graphics during its presentation. Lens-flare, great textures and smooth framerates, it was all there.

As was the case with the last Nexus, there’s no microSD card slot but there is still a front-facing 1.2-megapixel camera, this time paired with a 5-megapixel rear one. A rear camera is brand new to the Nexus 7, so “yay”. For connectivity there’s WiFi and Bluetooth 4.0.

It’s also a mere 317g light. Who wants quality sound? The dual-stereo speakers are Fraunhofer virtual surround sound-enabled. The 4G LTE model will debut in the US first on the AT&T, T-Mobile, and Verizon network. This by the way, is the first LTE-unlocked Google tablet ever. Most gloriously of all, there’s NFC charging capabilities now and a Slim Port video connection.

There’s also now multi-user profiles with “restricted profiles”. In other words, apps can be restricted so that kids don’t get into the Playboy app. We want to be very clear though, Android 4.3 looks exactly like Android 4.2 so far. Google demoed an app that restricted in-app purchases based on age.

Want to pre-order the new Nexus 7? US store Best Buy is waiting for your cash. Get spending, it wants your money! It’s coming to the UK, Canada, Japan, German, France, South Korea, Spain and Australia. We can’t even afford a can of beans, but this Nexus will taste better than food. If Google keeps making tablets as good as these, we’ll need to mortgage Gearburn HQ a third time (the first and second time were for Retina Display MacPros). Our quick review of it: the new Nexus 7 is goddamn amazing.

It’s Chrome on your TV, innit? It’s a tiny, 2-inch dongle that plugs into your TV’s HDMI port and pushes YouTube, Pandora and Netflix directly to your super-slim TV. YouTube, when it recognizes the dongle will load a new “cast” button. Volume can be adjusted directly from your iOS and Android smartphone, thanks to Google for supporting both platforms. Chromecast charges via USB. Didn’t the Nexus Q (one of Google’s hardware failures) do the exact same thing though?

One thing that our TV’s can’t do is project web pages from a device to the big screen, but Chromecast lets us do that as well. Bless. Chromecast will work on Android, iOS, Pixel, Windows, Mac and it’s a super-cheap US$35. We’ll take two please. It’s available in the US today. Chromecast image via The Verge 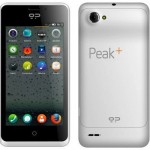