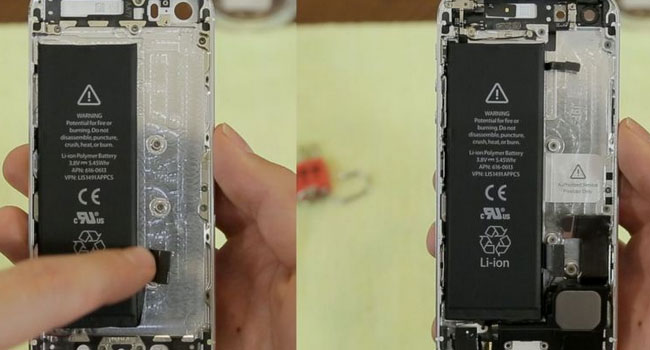 We already rounded-up some of the most favoured rumours of the iPhone 5S earlier this week. Apple seems more and more likely of dipping the iPhone 5S in honey and then roll it around in some updated hardware. There have been rumours floating around about the new coloured iPhone line-up as well as the iPhone 5S ‘Gold’, ‘Champagne’, ‘Chrome’ or even ‘Graphite’.

You can almost already see CEO Tim Cook presenting the new iPhone 5S in a golden graphite light and then — for some dramatic contrast effect — whipping out the neon green and blue plastic iPhones, flinging them into the crowds. The latter, less pricey model, goes by the name of ‘iPhone 5C‘ and will supposedly be available in an array of different colours.

In this latest alleged leak TLDToday presents the iPhone 5S ‘Gold’ while matching it up to the original iPhone 5. In the picture above you can see the iPhone 5S on the left and iPhone 5 on the right. Digging around inside the two iPhones, TLDToday points out some subtle inside design changes that gives us an indication of the spec up and coming spec updates. Can we say “iPhone Gold digger”?

As 9to5Mac points out, “the area reserved for the battery has increased in volume, with the logic board screws being repositioned, reducing the amount of space for the logic board and chipset.” On the outside you can see a beefier LED-flash which adds to existing rumours of an updated camera with dual LED-flash.

DetroitBORG compares the iPhone 5, iPhone 5S and the iPhone 5C. Curiously, the cheaper 5C model seems to have a larger build than the iPhone 5S. There are also some other subtle differences and slight characteristics we can pick up on. In this case, the iPhone 5S has sloping chrome edges, not gold.

Then in the last video we see a supposed graphite edition. The most notable characteristic we manage to pick up here is that the graphite version is lighter in colour than the original iPhone 5.

Whether colour is going to be the name of the game at Apple’s 10 September event or not. We’ll just have to wait and see. Though the iPhone 5S and less pricey iPhone 5C are likely to make their debut.