Oculus Rift is one step closer to a commercial release date for its much talked about virtual reality headset after it has just received a massive US$75-million in Series B funding with the Silicon Valley capital firm Andreessen Horowitz as new lead investor. This also means more games and overall greater opportunities for Oculus.

Developers had the chance to get their hands on Oculus Rift when it was made available to pledgers on Kickstarter in December 2012. For the virtual reality to become a reality to the masses though much more were needed. “Virtual reality has been a long-standing dream in tech and sci-fi. To me it always felt kind of inevitable but it was one of those things, you never knew quite when it would become a reality,” says Chris Dixon who is part of this latest investment firm.

So far Oculus has made more than 40,000 developer Rifts available through Kickstarter. Speaking to The Verge, Oculus CEO Brendan Iribe further says, “The reality is going into the consumer market with a full platform as expansive as this at high volume… really takes a significant investment. You look at the cost of goods at the hardware side, setting up the infrastructure… it’s pretty easy to do the math.”

This recent cash injection is hoped to spell out more games for Oculus Rift. Oculus founder Palmer Luckey suggests that this investment allows for greater confidence for software developers. “They’re not just betting that their game will be successful, they’re also betting that Oculus will sell enough units to make their game profitable, and that’s a really big bet for a developer to make,” he says.

Chief technology officer John Carmack says that this is the future of gaming and all digital experiences:

“The games industry is well past the point where more pixels, texels, flops, and frames displayed on the same fixed screens are really changing the experiences that players get. I could say the same about other digital experiences as well. What will revolutionize gaming, and interactive content in general, is putting people inside the digital world.”

Not only does this brings Oculus Rift closer to a commercial release date, it also allows for more experimentation and more room to branch out. A few months ago word came out that Oculus is experimenting on a mobile version for Oculus Rift. 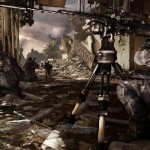