Virtual reality is hilarious. I remember using it as a youth back in 1997 at a gaming trade show and it was awesome. Obviously, it can’t hold a candle to what Valve and Oculus Rift has in store for us, but what could anyone expect from a product called “Cybermaxx“?

So VR is real, it’s made it to 2014 and very soon, we’ll be a little closer to the Matrix than we’d like to be. A lot of us (mostly gamers) have heard of Oculus Rift. It’s the Kickstarted VR helmet that has so much potential, it even drew-in legendary DOOM creator John Carmack as its chief technology officer. So why is 2014 the year of VR? The answers easy enough: technology has finally caught up with out ambitions. A CyberMaxx user, maxing out, to the max

Valve, the studio behind Left 4 Dead 2, has expressed special interest in Oculus VR and says that it’s days away from launching a standardized development kit for Oculus Rift and all other VR controllers. Valve plans to reveal this during its Steam Developer Days conference next week (14-15 January). But once a unified development kit for VR comes out, games will soon begin to take advantage of this once-mocked technology. And with Steam as a platform, it may see widespread love from the platforms 65-million registered users.

Here’s what Oculus has done to combat the usual motion-sickness associated with VR. It’s new headset, “Crystal Cove”, has a 30-millisecond refresh rate, so there’s less visual lag for us to endure. If there’s two low-latency screens stuck onto your eyes, nausea quickly sets in. With an almost 400g weight stuck to your head, less nausea is a good thing.

So what’s in store? VR rivalry for one. As BBC reports, Oculus Rift isn’t the only major VR headset in town. Sony recently announced the HMZ-T3Q at CES as a direct rival to Oculus Rift. This isn’t the first VR-style helmet from Sony though, that honour goes to the HMZ-T3W, a US$1000 VR headset that looks the exact same as the 2014 model. That model though was aimed at users who wanted a “cinema-like experience in the comfort of their own home”. It wasn’t made for gaming, but the HMZ-T3Q is. The major issue though is spatial awareness. Think of it like this: you’re playing Team Fortress 2 on the Oculus Rift and you want to make a sharp turn around to avoid a backstab from a would-be assassin. If you’ve got a wired controller or keyboard and mouse, this is close to impossible. Analyst firm Forrester agrees. “VR headsets face a significant problem that won’t be overcome in the near term. They’re not good enough to keep up with the sophisticated way the brain processes visual and spatial information, including the user’s own movement.” Overcoming this issue only costs US$500 though.

It’s called the Virtuix Omni Natural Motion Interface and this, combined with Sony or Oculus’ VR headsets, has the potential to immerse us in virtual worlds.

With harnesses, special shoes and tracking sensors, we’ll be able to run in spot, pivot and fire as naturally as we do in real life. Just you know, as we’re locked in with technology on all sides.

Ultimately, it’s not only a battle of the wallet (A US$300 Oculus Rift versus whatever Sony’s will cost), but of usability as well. Reviews have been kind to the Oculus Rift, despite it being labeled as a “sensory overload”, and we’re yet to hear any reports from the HMZ-T3Q (the HMZ-T3Z has “annoying blur”), so it’s a waiting game now until the commercial versions arrive later this year or early next year. So while 2014 may not be the year of VR, companies will at least have more time to perfect their VR visions of the future. 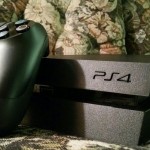