BlackBerry unveiled the Q20 at the Mobile World Congress in Spain this week, sticking to its guns of bringing us another “classic” QWERTY smartphone. Although there’s not much information available about the looks and exact specs of BlackBerry’s latest, it seems the tech giant is staying true to its original design.

The Canadian company’s latest flagship shows off a “generous” 3.5-inch touch display which is the biggest for a QWERTY BlackBerry display yet. The smartphone comes with the physical keyboard and includes dedicated buttons for Menu, Back, Send and End.

It also has a trackpad which is meant to be an integral part of the user interface, giving you “fast, precise navigation and a natural workflow within and between apps.” So you can track, touch and type.

The Q20 will of course come with the latest BlackBerry 10 OS which is said to have one of the most secure email services there is. The company says that there’s a big focus on the Q20’s battery life giving you a “superior” upgrade.

BlacBerry CEO John Chen said in a press release, that based on customer feedback “the hard buttons and trackpad are an essential part of the BlackBerry QWERTY experience, that made their BlackBerry smartphone their go-to productivity tool.”

There’s no word on the exact launch date and price of the Q20 however. 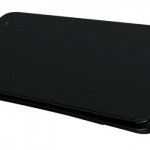