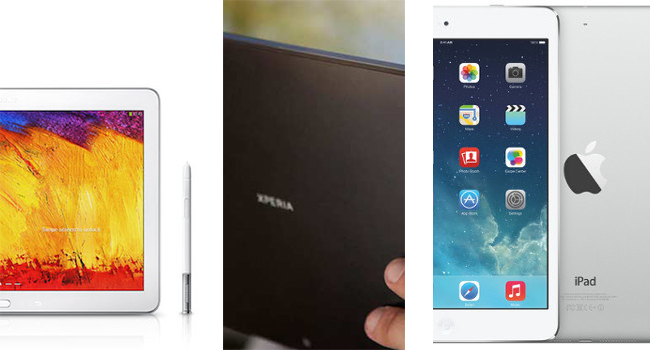 In the spirit of good faith, I’ll make a disclosure. I’m an Apple fanboy.

I’ve used the iPad since the introduction of the iPad 2, and I’ve recently just upgraded to the frankly awesome iPad Air. Despite my love for the fruits of 1 Infinite Loop, however, I don’t dislike Android. In fact, I feel that the OS is a novel system that has made impressive gains not only in marketshare, but in both usability and customizability to boot. There’s something to be said for an operating system that can exist across multiple devices yet still feel intuitive and fresh.

In this spirit, let’s instigate a full-blown shootout between the three biggest tablets in town: Apple’s iPad Air, Samsung’s Galaxy Note 10.1 2014 Edition, and Sony’s Xperia Z Tablet. Since this will inevitably provoke the ire from hordes of iOS and Android diehards, let’s play this first by the numbers and examine the technical aspects for each major tablet, followed by my short impression of each. We’ll work on this basis to establish which fills its role as a tablet more effectively than the rest.

Let’s start with the familiar. The iPad Air is Apple’s latest incarnation of it’s 9.4-inch tablet line, which is presently sold in stark Space Grey and Silver, with either WiFi-only or with Wi-Fi + 3G capability. The penultimate 64GB model (also available in 16, 32 and 128GB) iPad Air retails for US$699, comes standard with 1GB RAM, and weighs just under 500g on the 3G-equipped version. The Air is the lightest tablet reviewed here, and comes loaded with iOS 7, Apple’s in-house operating system designed specifically to maximise the tablet’s hardware in a way not fully realized by Android-running tablets. Furthermore, the Air’s Retina Display is exceptional, featuring crisp detail and sharp colour contrast in 264 dpi. With a 5MP rear camera that delivers great and rather useable results, as well as a 1.2MP front camera for FaceTime, Skype calls as well as obligatory selfies, the Air delivers detailed photos which are portrayed beautifully by the device’s quality screen (264 pixels per inch). Ultimately, the Air’s unlikely killer feature is undoubtedly the device’s battery life, which lasts 10 hours if not longer with heavy use. Complemented by Apple’s Lightning connector, the Air both syncs to iTunes and charges quickly. Additionally, with Apple now providing its iLife suite for free on all new iOS devices, any Air is instantly a creative powerhouse with an intuitive and integrated feature set.

Our second contender is Sony’s Xperia Z tablet; which at 10.47-inches long, is the widest tablet in this roundup, and weighs in at 495g, which is ever-so-slightly bulkier than the Air. Running a heavily tweaked variant of Android 4.1.2, and available in black and white between LTE and WiFi versions, the Xperia Z contains a measly 16GB internal storage at maximum. Fortunately, the Xperia Z’s pitiable internal storage is offset by the possibility of installing a microSD card for storage, with supported capacities up to an additional 64GB. The Xperia Z’s RAM totals at a reasonable 2Gs – twice over what the Air offers. In terms of cameras, the Xperia Z is a strong contender with an 8.1MP rear camera and 2.2MP front camera. Both, technically speaking, blow away the Air’s, though in real life any quality difference can be difficult to discern. Connection is achieved to a PC is made through microUSB to USB.

Priced at US$519.99, which is both reasonable and affordable considering the Xperia Z’s higher technical specifications, the tablet also lasts a reported 10 hours when using multimedia.

On the third front of the battle line is the Samsung Galaxy Note 10.1, the premier Samsung tablet powered by Android 4.3.

At 9.57-inches long, and weighing in at 600g, the Galaxy Note is longer than the cellular capable Air. The Note further boasts an S Pen stylus alongside the traditional touch experience. Available in black or white, the Galaxy Note bears 32GB internal storage at maximum, and can be complemented with a microSD card up to an additional 64GB. The Note begins to land serious blows to both the Air and Xperia Z through boasting 3GB RAM, as well as having an 8MP rear camera with an LED Flash and a 2MP front camera (nearly double the 1.2MP Air’s front camera). Connection is achieved through a slowly-beginning-to-feel dated microUSB to USB. And hey, guess what? This tablet vibrates too. Take that, Apple. The Galaxy Note also boasts a 9-hour battery life, but is dependant largely on what Galaxy features remain on or off within Android itself. Attractively, the Note is priced at US$549.99, which is considerably more affordable than the top-of-the-line iPad Air. Ultimately, whether Apple fanboys could bring themselves to admit it or not, Samsung has produced the technically superior tablet – but are technical specifications really everything?

From first impression, all three tablets vary significantly in their capabilities.

Apple’s iPad Air is a marvellous device, yet is quite far from that persistent “revolutionary” claim. The Air’s updated form factor is beautiful and slim, with side bezels encouraging easy use and holding. The Air’s Retina Display is truly beautiful, with crisp, clear presentation and vivid colour, and while having lesser tech specs than either the Galaxy Note or Xperia Z, manages to perform with a fluidity seldom seen in the Android tablet world. The Air is perhaps best complemented thanks to all software and hardware components being designed and manufactured for one another, despite, in form, bringing little to the table that wasn’t already there when the first iPad was introduced by Steve Jobs. It’s probably better to deem this a graceful and artistic refinement than a total reimagining. The iPad Air isn’t a maverick product, yet it still manages to feel like one.

We reviewed the Air, once…
On the outside, the Xperia Z has a beautiful slim, trim and rectangular form factor, and, interestingly enough, is waterproof. The Xperia’s wide bezel is off-putting for two-handed usability, and yet is refreshing to use with a single hand – or finger. Thanks to Sony’s Bravia engine, colours are vivid and engaging, despite the tablet’s tendency to track fingerprints from even the quickest of ninja-swipes.And *shock* the included Sony apps are a welcome addition, as Android’s are traditionally barren media handling apps. The most unfortunate aspect of the Xperia Z tablet is undoubtedly the tendency for apps and displays to lag, which truly mars the device’s sophisticated build. The Xperia ultimately suffers from that old adage on beauty – truly beautiful and sleek hardware is marred by a software experience, which still, by all accounts, needs a hammer and spanner handy to make use of.

The Galaxy Note, on the other hand, provides a slick Samsung-Android experience, with an attractive form factor detailed with thin side-bezels and more distinctive-looking round corners. The placement of the USB port is an irritating issue which distracts from use when plugged in, and prevents standing the tablet up while connected. The back of the Note sees Samsung’s latest fetish in faux-stitched plastic, which ultimately feels cheap on a device with such excellent technical specifications. Unlike the Xperia Z or Air, the Note is difficult to use one-handed, and is probably best supported by two hands due to its fairly hefty nature. The Note is further outfitted with a high-resolution 299 dpi display which conveys pixels sharply, and colours vividly, and the rear camera offers picture quality which provides the best camera on test, capturing brilliant detail. The Note, however, is let down by Samsung’s decision to package differing models with differing processors; the lower spec 1.3Ghz nor higher spec 1.6Ghz processor don’t provide a fluid experience comparable to the Air.

There can be only one (or two)

On paper, there’s a clear winner. The Galaxy Note 10.1 is undoubtedly the best tablet reviewed, with high level specifications and a great deal of functionality thanks to its added S Pen. Yet, in comparison, the Note is outdone by the Air’s sophisticated performance that out-competes its rivals by making full use of optimized, yet lesser specifications. The Xperia Z, while a decent tablet, is left in third place, hovering between decent technical specifications, and a lacking performance factor.

It’s likely that none other than personal preference would form your choice between the two winners, the Galaxy Note and the iPad Air. Ultimately, both tablets are stunning pieces of technology with performance ratings in similar leagues – and as the old saying goes, you’ll likely find what’s right only once you’ve picked either one up. Though I’m an iPad devotee, I believe I could find myself quite at home on either of these marvellous slabs of internet. 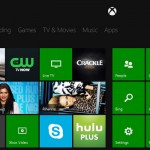