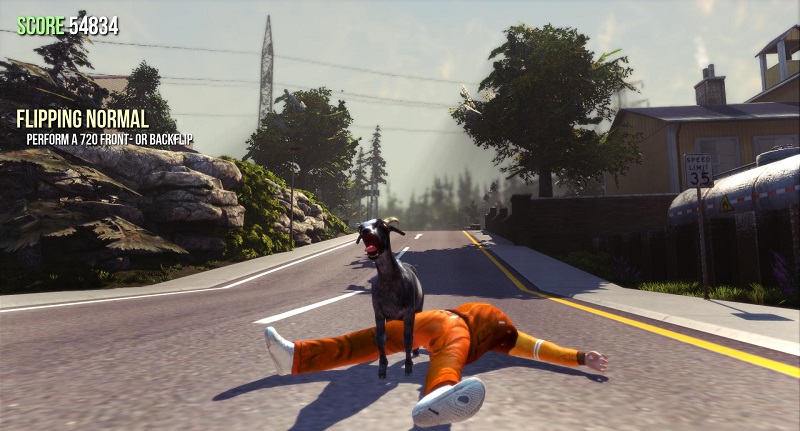 This is a good game — Tony Hawk with a goat, in essence. Goat Simulator’s cool and stupid, which is a marvel.

There are tricks, objects to break and people to lick, pulling them along with their spastic rag doll physics. Pity the goat controls like a slippery lawnmower, but it’s all charming fun. This is a game made for live broadcasting on sites like Twitch where the whole world can laugh and clap along. Did I mention that it’s only US$10? For the three to four hours Goat Simulator takes to master, that money’s well spent. Controlling the goat is a special type of thrill. I really had no idea of how a goat should control, so maybe it’s spot-on. The WASD keys move the goat around, mouse controls the camera and left click bashes the little goat into the balloon=people. Goat Simulator has an uncanny resemblance to most Tony Hawk Pro Skater games, as there’s set goals (Jump 30M high, break up a party) and a score to max out.

Hidden collectibles dot the arena and the music, the sweet fairground music tunnels into your brain and cements itself there, in a spot where it’ll never be forgotten. It’s incredible what the design team have created — it’s the perfect homage to T Hawk’s suburban skater parks mixed in with a 2014 facelift. This makes Goat Simulator score higher for nostalgia addicts, like me.

Here’s the concern though: you’ll have to deal with an incredibly buggy game. Goat Simulator is riddled with bugs, which the games design team has strived to eliminate — but only the uncool, game-breaking ones. The rad ones remain. While I played, a constant was somersaulting and getting stuck in a piece of scenery. But Goat Simulator costs less than a Big Mac meal, and is three times as interesting, so you learn to live with the glitches.

The graphics are charming. Imagine a coked-out version of The Sims, existing at a point just outside human comprehension, with a goat. Like a David Lynch Xbox One game, it’s trippy. With the music twiddling, the goat bouncing around like an invincible pinnate and the glorious controls working against you, a fun time is guaranteed for the few hours it entertains for. I believe that as the community mods Goat Simulator, it’ll vastly improve. I can see quest modes, multiplayer races to the highest destruction score and even a full-on massive-multiplayer-online component in the future (despite the creators saying that it’s impossible).

Goat Simulator is a game with silly class and its thoughtful controls are easy to pick up, while shockingly, the game is even easier to master. Goat Simulator’s downfall is its length, but don’t worry about buying it — even the game’s creators say that money is better spent elsewhere. That, folks, was all it took for me to download Goat Simulator. There was love pumped into this game, and the community that has already embraced it is sure to breathe life into it for years to come.

Nutshell: Great fun, in short bursts. Can be completed in a few hours, but still worth the money. The controls are wonky, but just pretend the goat is a small four-wheel drive vehicle. I loved the music, I thought the wacky animations and graphics suited the game perfectly, and I hold farm-yard animal sims in high regards. Roll on Cow Simulator. 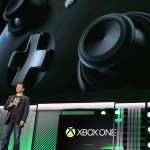